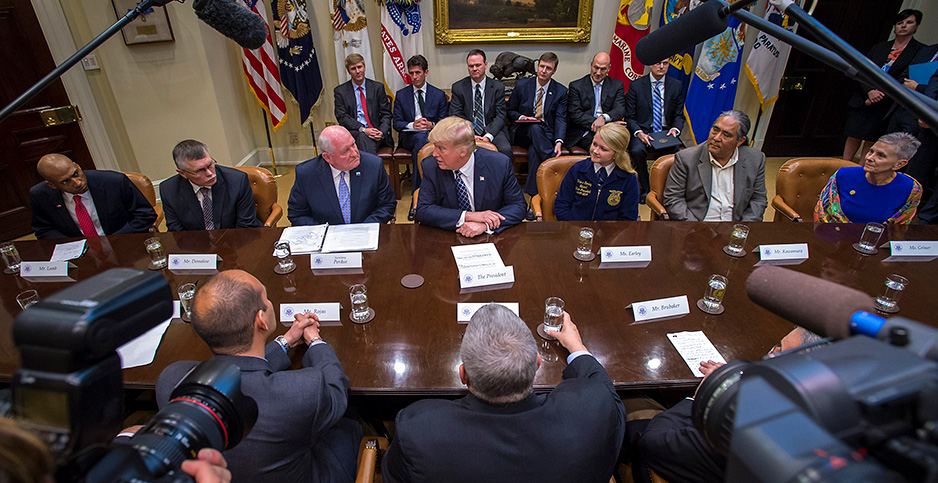 Agriculture Secretary Sonny Perdue will allow agency scientists to study how U.S. farmers are responding to climate change — a notable departure from the Trump administration’s history of squelching climate science through budget cuts and the suppression of scientific reports.

The recently released "USDA Science Blueprint" identifies climate adaptation as one of five focus areas the agency will pursue between 2020 and 2025. It includes 26 objectives, strategies and evidence-building activities around climate change, divided under two broad headings: landscape-scale conservation and management, and climate research and resiliency.

"We are committed to putting science to work for the American public," Scott Hutchins, head of USDA’s research, education and economics mission area, said in a statement. "We will always strive for scientific excellence and integrity in support of America’s agriculture."

The suppressed research included one study into whether rice loses vitamins under elevated carbon conditions and another that warned farmers and ranchers about declining quality of forage grasses due to warming.

USDA oversees one of the government’s largest and longest-running research programs. Six USDA offices are charged with advancing research and knowledge about the nation’s production of crops, livestock and forest products, as well as the management of 193 million acres of national forests and grasslands.

Forest managers and experts have relied on USDA research to address a number of major climate events, including the recent California wildfires. The agency also provides critical information to the agriculture sector about climate change impacts to farms, ranches and managed forests. It also looks at ways agricultural land can be managed as carbon sinks.

Perdue said, "USDA’s agricultural research is vital to helping our farmers, ranchers, producers and foresters increase efficiency and productivity, and our science agencies play an integral role in setting forth new visions for innovation through their work."

John Piotti, executive director of the American Farmland Trust, called the blueprint "an important commitment" by Perdue and USDA to scientific research on behalf of farmers and ranchers, and that the organization "is heartened to see climate change as a key focus."

"As farmers struggle to deal with the impacts of both extreme weather and a challenging farm economy, it is good to see the department intends to help them build resiliency and adapt to new realities," Piotti said.

"It is relatively easy to put things down on paper, but delivering on them in the real world and carrying through is a totally different thing," said Mike Lavender, senior manager for government affairs at the Union of Concerned Scientists.

Lavender said the Trump administration also has contradicted itself on climate change, noting that the president’s proposed fiscal 2021 budget includes "steep cuts to the very research and conservation programs that help farmers adapt and be resilient to climate change."

"Talking out of both sides of your mouth is a phrase that comes to mind," he added.