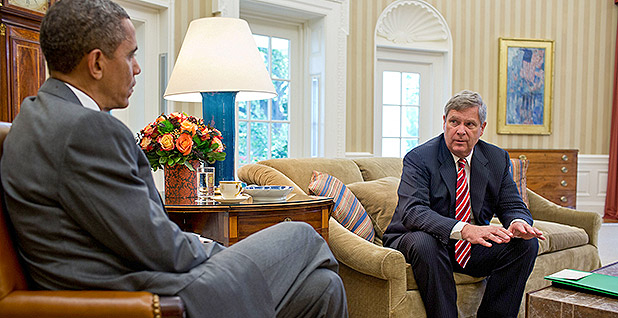 Agriculture Secretary Tom Vilsack is the only Obama Cabinet official who remained on his job for all eight years. Photo by Pete Souza, courtesy of the White House.

Agriculture Secretary Tom Vilsack sees it as a sign of disrespect to his agency that President-elect Donald Trump hasn’t yet announced his replacement.

"I feel badly that this department doesn’t get the respect that it deserves," Vilsack said today in an interview.

For example, he said, "We don’t have a nominee. … Look at it this way: If the current president-elect had not designated a Defense secretary, an attorney general designee, secretary of State, Treasury, Homeland Security, my guess is you and many Americans would be deeply concerned about that. The person in charge of this department has some responsibility of ensuring that this country gets fed, that its environment — private working lands and public forests and grasslands — are protected. Well, golly, that’s pretty significant."

With nine days until Inauguration Day, the USDA position is the last remaining Cabinet post to get a nominee. Trump announced his pick this morning for the other vacant post, saying he plans to nominate Obama administration official David Shulkin for the top Veterans Affairs job.

By contrast, Vilsack was announced as Obama’s nominee on Dec. 17, 2008. He was among the last picks for Obama’s Cabinet to be formally announced.

"Obviously, there will be a nominee at some point," Vilsack said today. "I feel badly for that individual, because I know that when I was asked to do this job in early December, that I started the transition learning process immediately, had massive three-ring binders of information submitted to me."

The Senate held a hearing for Vilsack in mid-January of 2009, and he was unanimously confirmed by the chamber on Obama’s first day in office.

Trump has met with several prospects for the USDA job but hasn’t announced his nominee. Senate Agriculture Chairman Pat Roberts (R-Kan.) said yesterday that his panel likely won’t even begin hearings for a nominee until after Inauguration Day (E&E Daily, Jan. 11).

The next USDA boss will have significant sway over national environmental policy.

"Agriculture represents roughly 9 percent of the greenhouse gas emissions for our nation, and our ability to meet the thresholds the president established as part of the Paris Agreement is somewhat dependent on the ability of agriculture to continue to step up and be more efficient," Vilsack said.

Vilsack is the only member of Obama’s Cabinet who remained on his job for the full eight years of the administration.

He said he wasn’t thinking about how long he’d stay when he first took the gig. "This has been a real joy, privilege and honor to have this job as long as I’ve had it, and to have the president’s confidence allowing me to continue to serve to the end of his administration."

Among his best days on the job, he recalled, was being on a destroyer in the middle of the Pacific Ocean as it was refueled with biofuel that was made from Midwestern beef tallow. Another highlight, he said, was celebrating the administration’s decision not to list the sage grouse as an endangered species "because farmers had stepped up and we had helped them with a partnership with the Department of Interior."

USDA is "just an amazing department, and one that’s just not as appreciated as it should be," he said.

As far as his regrets, Vilsack cited a failure to "fix" the forest fire budget.

"It now consumes over 60 percent of the Forest Service budget, just putting out fires. And the result of that is that we can’t do the job — even though we’ve done more than the previous administration in terms of restoration and resiliency efforts — we can’t do the job that needs to be done because we don’t have the flexibility with our budget. And that has an impact not just on the Forest Service budget, but on the entire USDA budget."

"But all of this needs to be structured so I can spend time with my family," he said. "I think I’ll probably be centered in Iowa, with an opportunity periodically to come back to D.C., and maybe spend some time in the state of Colorado, where one of my four grandchildren lives."