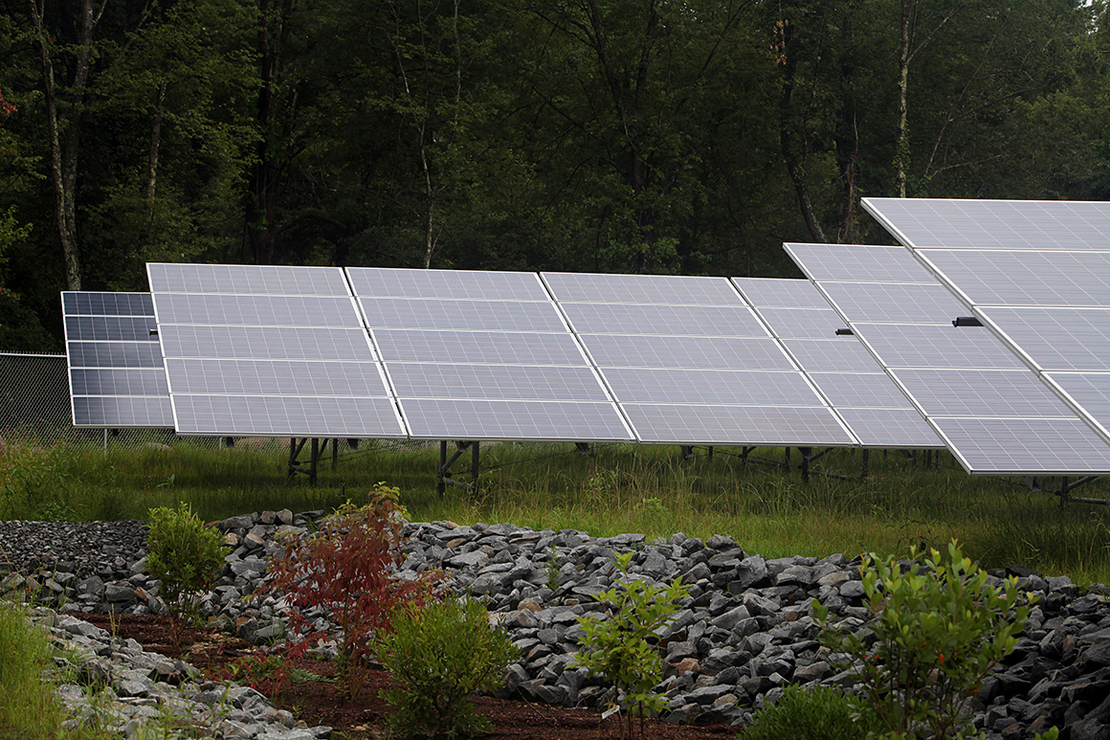 A shared solar project in Freetown, Mass., is pictured in 2015. Aynsley Floyd/AP Images for NRG

The state public utilities commission found that 41 percent of community solar projects withdrew their applications to connect to the grid through the local utility Public Service Company of Colorado in 2019 and 2020, underscoring what some say is a growing barrier for clean energy across the country.

“When I was in school, that was a D- or maybe an F, if I had that much dropout,” said David Amster-Olszewski, founder and CEO of the Colorado-based community solar company SunShare.

As the cost of installing home solar panels declines, rooftop solar has gradually become more accessible to people of moderate and lower incomes across the U.S., according to data from Lawrence Berkeley National Laboratory. Twenty-two states and the District of Columbia now have community solar programs, which promise to bring solar to people who don’t own their home.

But developers from New England to California say problems connecting to the grid is an often-overlooked issue that is strangling new rooftop and community solar projects.

“It seems like we have more interconnection issues than we’ve seen at any one time across the country,” said Radina Valova, regulatory vice president of the Interstate Renewable Energy Council.

The challenge is apparent in states with long-running rooftop solar incentive programs and in urban areas where solar demand is high, observers say. Community solar and small-scale commercial projects, such as a solar or battery installation on a business or a school, also seem to be most affected, according to developers.

Solar developers say that homeowners, business owners or nonprofits who are interested in solar are sometimes waiting several months — or years, in extreme cases — to connect to the grid, which is typically operated by whichever electric utility serves the area. Long interconnection “queues” as well as a lack of transparency over wait times sometimes lead applicants to drop out of the interconnection process, according to clean energy advocates.

The number of projects, as well as the cost of connection to the grid, are contributing to the problem.

In some cases, applicants may make it through a queue, only to be told that they need to pay several thousand dollars to connect to the grid, developers say.

Rao Konidena, an independent clean energy consultant, recalled a client of his recently in Illinois who wanted to install a battery storage system on a grocery store. When the customer learned that a key component of the nearby grid — known as a transformer — would need to be upgraded before the project could connect and would cost around $350,000, the customer decided to abandon the project, Konidena said.

“When some of these costs increase beyond $100,000 for distribution interconnections, there’s not enough margin for the developer to make any money off it,” he said.

Research from the University of California, Berkeley, also suggests that interconnection problems in California, the largest solar market in the country, are disproportionately common in historically disadvantaged communities. In the Golden State, the distribution network tends to be more constrained in “Black-identifying and disadvantaged census block groups,” which may exacerbate inequities in access to clean energy, according to a study published last year in Nature Energy.

“Nationwide and elsewhere, policymakers and regulators will increasingly confront grid limits as a barrier to renewable energy adoption,” the UC-Berkeley researchers concluded in the study. “Evaluating the implications of these limits will be critical to reaching equity goals for the deployment of distributed energy resources.”

‘Not where we want to be’

Interconnection challenges have not gone unnoticed by state utility regulators. Efforts are underway in at least a half-dozen states to study or try to improve the interconnection process, Valova said.

In the years to come, interconnection difficulties could “represent a major challenge” for community solar, according to an analysis from Wood Mackenzie and the Coalition for Community Solar Access.

“As community solar penetrates more markets, it will have to contend with interconnection challenges due to grid congestion and outdated infrastructure,” Rachel Goldstein, an analyst at Wood Mackenzie’s solar research team, said in a statement last month when the consultancy group’s analysis was released.

Utilities say they are constantly refining their processes to keep up with growing demand for solar, batteries and other small-scale projects. Typically, utilities can process interconnection requests for small resources without delay so long as the electric circuit in the area is able to accommodate the additional capacity, said Nadav Enbar, program manager at the Electric Power Research Institute.

Once the “hosting capacity” in a given area has been met, the utility will then study what sort of upgrade may be needed, Enbar said. The length of time for those studies varies, but often, the customer waiting to connect will ultimately be charged for any upgrade costs.

“Oftentimes, [the cost] really depends on the size of the project, the level of review, the amount of labor and time that goes into a project, and the notion of what’s necessary to interconnect,” Enbar said.

Xcel Energy Inc., which owns Public Service Company of Colorado, is working “to make it faster and easier” to connect community and rooftop solar installations in the state, said Kerry Klemm, manager of business solutions for the company. In the last few years, the company has expanded training programs and office hours to help people understand the interconnection process, as well as removed certain steps in the process to make it more efficient, Klemm said.

Across its broader service territory spanning eight Midwestern and Western states, Xcel has connected over 900 megawatts of community solar and 780 megawatts of customer-sited solar to its distribution system, Klemm said. Nonetheless, Colorado’s mountainous geography and zoning rules limit the available space for community solar, she said.

In its interconnection report from last year, the Colorado Public Utilities Commission found that the process for linking distributed energy resources to the grid was “fairly smooth,” PUC Commissioner Megan Gilman said at a meeting last month of the National Association of Regulatory Utility Commissioners in Washington. Still, the PUC identified high turnover of employees at some Colorado utilities as one factor causing delays. The commission also hopes to start tracking why applicants withdraw from the queue.

Dropping out of the queue does not necessarily mean that a project is abandoned, Klemm said. Sometimes, a developer will decide to pursue interconnection in another location due to interconnection costs.

“Projects may go through the interconnection process and get to a point where they get an interconnection cost or result, and they decide it’s not a good site for them,” Klemm said.

But Gilman said Colorado’s high dropout rate for community solar in particular must be addressed.

“Seeing a 41 percent failure rate is obviously not where we want to be,” she said during the NARUC meeting.

Beyond Colorado, regulators in Maryland, Massachusetts, Illinois and other states are evaluating new approaches to interconnection, said Valova of the Interstate Renewable Energy Council. While clean energy developers are encouraged by the increased attention on interconnection, they hope solutions are adopted sooner rather than later given the threat of rising emissions.

In New England, greenhouse gas emissions from power plants rose by about 13 percent from 2019 to 2021, due in part to higher natural gas consumption following the closure of a nuclear power plant (Climatewire, Feb. 17). Meanwhile, large renewable energy projects — including a high-voltage power line through Maine that would have supplied New England with up to 1,200 megawatts of carbon-free hydropower — have faced permitting obstacles.

Today, small-scale projects in Massachusetts may end up waiting up to three years to connect, and interconnection costs make up an increasingly high portion of a project’s overall price tag, developers say. Those trends threaten to limit rooftop solar access at a time when Massachusetts is trying to expand it, especially in low-income communities, said Jeremy McDiarmid, vice president of policy and government affairs at the Northeast Clean Energy Council.

In December, the Massachusetts Department of Public Utilities (DPU) doubled the size of a solar incentive program known as the Solar Massachusetts Renewable Target (SMART) and added new consideration for historically disadvantaged communities (Energywire, Jan. 4). But interconnection costs must be affordable for the program to be a success, McDiarmid said.

“Our overall climate goals, our environmental justice goals and our ability to lead as a state and a region hang in the balance of getting [interconnection] right,” McDiarmid said.

One potential solution is to change how interconnection costs are allocated. Rather than assign costs based on whether or not a specific project triggers a grid upgrade, customers could pay a fixed fee based on the size of their system. That option has already been implemented or is being explored in a growing number of jurisdictions, said Enbar of EPRI.

“[We] have worked with external stakeholders and the DPU to create a group study provision that allows us to study multiple projects in groups and complete them more quickly while sharing the cost of any associated system upgrades across the projects,” Hinkle said in an email.

Some state regulators are considering ways to incentivize utilities to proactively invest in the grid. Utilities could project how much new distributed energy will come online within the next five years, for example, and invest in the grid accordingly, Valova said.

But requiring utilities to “anticipate” the energy needs of the future also opens up the possibility for stranded assets, said David Lapp, head of the Maryland Office of the People’s Counsel. If utilities upgrade the grid expecting an increase in distributed resources and the demand for those resources is not met, should consumers have to pay for those investments?

“If it’s not very carefully thought through, it could be easy for utilities to overbuild to the detriment of customers,” Lapp said.

For now, the industry is watching as Massachusetts and Maine grapple with “the complexities that come with interconnection studies and upgrade cost allocation decisions,” said Wood Mackenzie’s Goldstein.

“These grid challenges could be replicated in other states, with some developers believing that the situations in Maine and Massachusetts are harbingers of the interconnection challenges they may see in other markets,” she said.

Correction: An earlier version of this article erroneously referenced a Solar Energy Industries Association report from this year. The report was released last year.