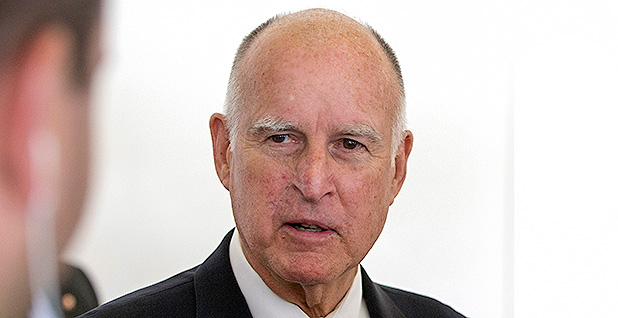 California water users are about to decide whether to back Gov. Jerry Brown’s (D) bid to revamp the state’s main water hub, but some still have questions about the costs and benefits of the plan.

The state’s largest water suppliers are preparing to vote on whether to support the $17 billion project to build tunnels underneath the San Joaquin-Sacramento Delta, and other water districts say state officials are pressuring them to reach a decision soon, as well, although major questions remain about how much more water they can expect to receive for their investment.

Westlands Water District, the largest agricultural water district in the country, is voting as soon as today on a resolution to help fund the set of 40-foot-diameter tunnels, starting with a contribution of $55.2 million to cover work through 2018. Metropolitan Water District, the country’s largest urban supplier, is expected to vote next month. Another major supplier, the Santa Clara Valley Water District, is also nearing a decision, which one board member said is being coordinated with the larger districts’.

"They told us that back in August, that we had to make a decision by Oct. 10," said Richard Santos, a board member at the Santa Clara Valley Water District, which supplies roughly 2 million people in the Silicon Valley area. "Now it’s been switched because Met’s meeting is on Oct. 15 and they’re one of the major players."

Brown has long sought to install a man-made conveyance structure in the delta to complete the State Water Project, the set of 21 dams and hundreds of miles of canals and tunnels built by his father, former Gov. Pat Brown (D), that provides water to 25 million Californians. His earlier attempt to build a canal around the delta was voted down in 1982, in his second gubernatorial term. The latest iteration has been 10 years in the making.

Without the tunnels, state officials say, California’s water supply will remain vulnerable to rules for protecting endangered species as well as earthquakes that could pancake the delta’s mazelike levee network and send seawater rushing inland.

But planners of the tunnels have struggled to balance the tenets of water supply and environmental protection. They must satisfy both environmental and local delta interests that balk at the ecosystem losing any more water, as well as the water contractors that would be paying for the tunnels with the expectation that they receive more water than they have in recent years.

The Trump administration issued biological opinions in June clearing the way for the project to receive an Endangered Species Act permit for the incidental killing of listed species, which include the threatened delta smelt and endangered chinook salmon (Greenwire, June 27).

But the project is still struggling to line up financing, as no water users have yet formally committed to paying. The state has hewn to the principle of "beneficiary pays," in which only those who receive benefits have to contribute.

Westlands says in its resolution, though, that it will only participate if the project’s costs are recovered "through rates imposed on all CVP [Central Valley Project] water delivered south of the Delta." And it cites the state Department of Water Resources as planning to recover the state’s share of the costs "from all state water contractors" in proportion to their contracted deliveries.

Santos said his district’s staff relayed as much to him.

"All state contractors would be responsible for paying," he said. "The discussions have been, ‘Well, if you don’t opt in, you lose your water rights.’"

A state official confirmed that contractors south of the delta would be obliged to opt out but said it wasn’t a recent idea.

"The idea would be that if you decide to essentially opt out and not participate in the benefits and the costs, you could independently reach an agreement with another willing contractor," state Natural Resources Agency spokeswoman Lisa Lien-Mager said.

She denied contractors’ water rights would be affected but said deliveries would be expected to decline over the long term by about 1 million acre-feet per year, distributed among those who decide to opt out.

"I don’t think there would be any change to their contracts, but they would just not be receiving the additional water supply benefits of certainty and reliability that WaterFix is expected to provide," she said. "Those who weigh it and decide that they don’t want to participate in the costs and the benefits … you can imagine over time there’d be some decline in their water supply reliability."

Not all contractors are under the expectation that they will be asked to pay.

"It’s our understanding and our position that since we’re not benefiting from the tunnels, that no, we’re not paying for that," said Roland Sanford, general manager of the Solano County Water Agency, located between San Francisco and Sacramento, which draws its delta water from a different location than the southern users. "For those folks that are potential beneficiaries of the tunnels, they all have to make a decision as to whether they are in or out. We’ve just been kind of sitting on the sidelines."

Butte County, in the north of the state, wants language in its State Water Project contract extension that would insulate it from the project’s costs, but it has not been able to reach agreement with the state over several years of talks. The county has sued the state over the tunnels’ expected environmental effects and is also challenging the proposed issuance of bonds to fund the project, as the state applied for court permission to do in July.

"It’s kind of kept pushing it off, but now it’s coming to a head," said Paul Gosselin, Butte County’s director of water and resource conservation. "That’s why the pressure to line up on who’s going to pay and how this is going to unfold has become kind of confusing and kind of strange. Part of it is because there really isn’t a plan on how the funding is going to go."

"The idea that beneficiary pays is not true," said Barbara Barrigan-Parrilla, executive director of Restore the Delta, a group of Sacramento-area farmers and environmentalists.

"Everyone, including me, has been so distracted by Trump dismantling federal protections for the environment that they haven’t been keeping a close enough eye on what’s been going on. While everyone’s been distracted, Brown is just playing with the system to push the project."