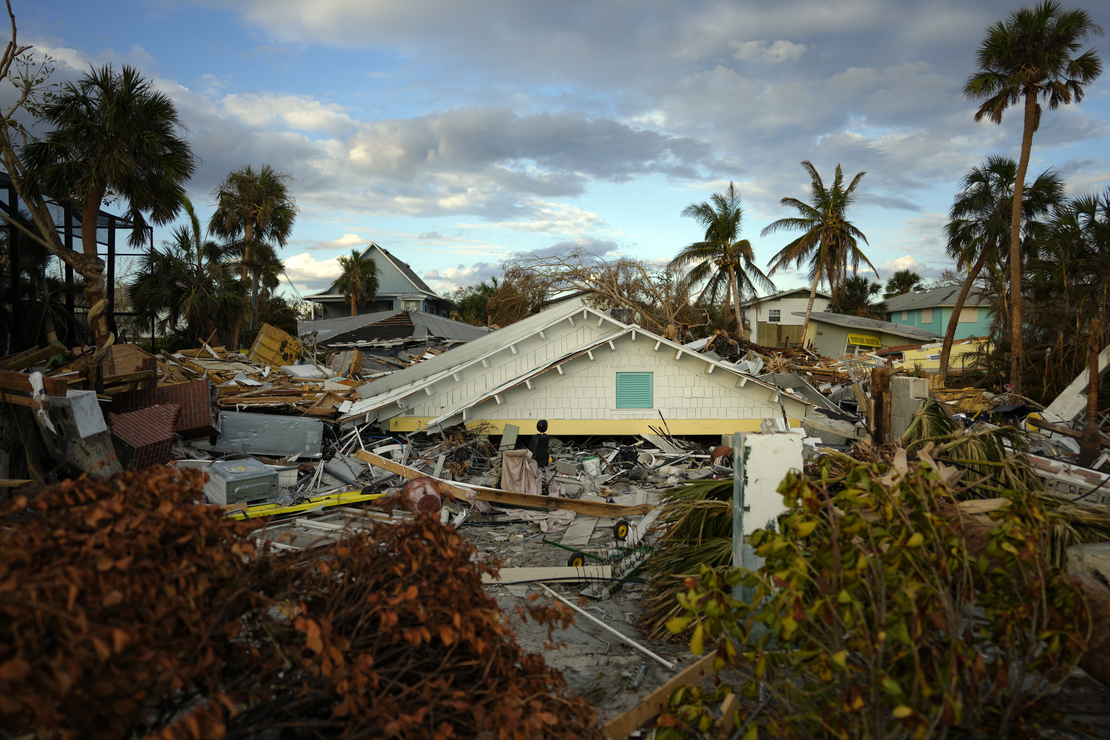 After the passage of Hurricane Ian, only the roof remains of a home in Fort Myers Beach, Fla., in this photo taken Oct. 5. AP

Ten years ago, Fort Myers was a midsized Florida city with dreams of getting bigger, perhaps becoming the “Second City” of the eastern Gulf Coast, behind Tampa.

Things were going fine until Hurricane Ian arrived last month, destroying tens of thousands of homes and businesses across Florida, with statewide property losses now estimated as high as $70 billion, according to the disaster analytics firm CoreLogic.

In Lee County, which encompasses Fort Myers, officials say the Category 4 storm destroyed more than 5,000 homes and damaged 27,000, with projected losses of nearly $6 billion. An additional 18,000 homes and properties were affected by Ian, resulting in $812 million more in losses, according to an online dashboard maintained by the county.

Yet on Tuesday, Gov. Ron DeSantis found a silver lining in the grim reality. New development, he said, was making the Fort Myers area more resilient to storms.

“You look at some of these subdivisions here in Lee County,” DeSantis said during a press conference in Fort Myers to tout the beginning of rebuilding efforts on nearby Sanibel Island. “Granted they got flooded, which is bad, but you didn’t see mass subdivisions of new construction just reduced to rubble. So, I think that’s something that’s really significant.”

Others, however, see a different picture.

Could the region have been spared some of the damage with more aggressive planning and zoning? “Yes,” planners and resilience experts say. Sound land use planning builds stronger communities — physically, socially and politically.

Yet Florida lawmakers effectively killed the state’s ability to check urban sprawl a decade ago with the passage of a reform measure called the 2011 Community Planning Act.

The law, passed by a Republican-controlled legislature with support from then-Gov. Rick Scott, rolled back much of Florida’s 1985 Growth Management Act, which for 25 years gave the state oversight and enforcement responsibilities to ensure Florida cities and counties avoided unplanned, unwise development.

It also cleared a path for Scott’s dismantling of the Florida Department of Community Affairs, which was responsible for enforcing the Growth Management Act and, among other things, “plan[ning] for and respond[ing] to both natural and manmade disasters.”

“Essentially, we removed aggressive state oversight of comprehensive planning,” Whit Blanton, president-elect of the American Planning Association’s Florida chapter and executive director of Forward Pinellas, a public agency guiding planning and zoning for 24 cities north and west of Tampa Bay, said in a telephone interview last week. “Nobody was minding the store anymore except the local officials. And while the local governments by and large are pretty good in Florida, there’s no backstop anymore.”

In fact, the playing field across much of Florida is wide open, experts say, as developers flex their political muscle with mayors, councils and local planning commissions to build subdivisions on what was once considered marginal land. In southwestern Florida, that means wetlands, farms or the fringes of conservation areas buffering the Everglades.

“You just had massive migration into these areas, and a lot of it happened after 2011,” Blanton said. Under the new state policy, “most of the oversight went away, and there was a shift to tell local governments they were on their own. So instead of doing more visioning and finding out what the community wanted, there was less.”

“There has been the creation of entire new towns that are on the northern frontier of the Everglades,” he said.

Ave Maria, for example, about 40 miles southeast of Fort Myers and just north of Florida Panther National Wildlife Refuge, is one of the newest census-designated places in Florida. The master-planned town was established as the site of a Catholic college, Ave Maria University, in 2007, and today boasts a population of more than 6,200.

Ave Maria saw only minor damage from Ian, officials said, and last week the town’s Facebook page included the following reassurance: “We are happy to inform all builder sales centers are open during their regular business hours. Please reach out with any questions.”

A similar theme is playing out in once-sleepy Fort Myers, though at a much larger scale. If growth trends continue, the city should surpass the 100,000 population mark before 2030, building upon the 30,000 new residents that settled in Fort Myers between 2010 and 2020 decade, a 24 percent increase.

With population growth, housing demand also has soared. Since 2000, the city saw 27,000 new homes constructed, mostly along its eastern and southern flanks, according to city economic development data.

Yet with every subdivision platted and built, the risk of property losses from hurricanes rises, a point Ian made abundantly clear.

It remains less clear, however, whether the storm’s monumental damage would reshape local views toward development and storm risk in places like Lee County. And even strong planning and zoning regulations won’t save some areas from climate-charged storms.

“There’s a strong environmental ethic down there in those counties, but they’re also very conservative politically and anti-regulation,” Blanton said. “They tend to be very favorable toward growth and development. It’s been that way a long time.”