What does ‘waters of the U.S.’ mean? We asked the authors 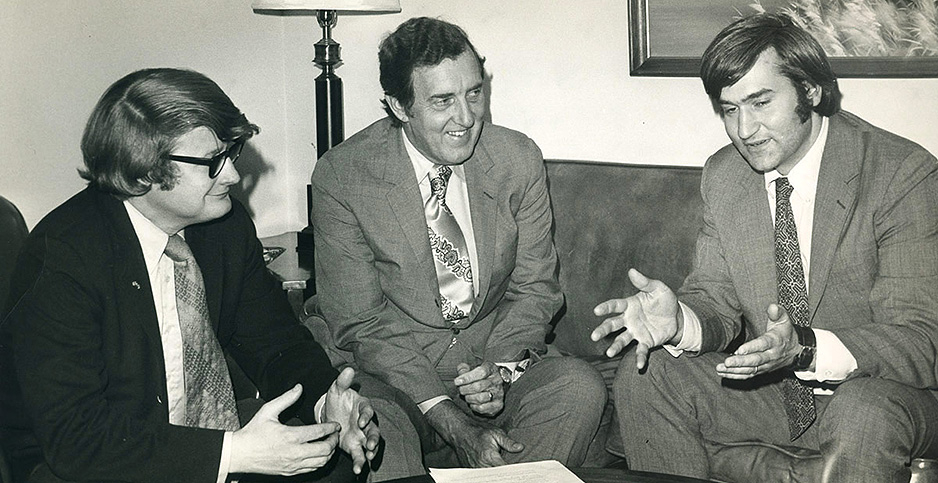 This is arguably the most contentious phrase in environmental law: "waters of the United States."

Written at the 11th hour in the fall of 1972 in a bid to get the landmark Clean Water Act through Congress, those five words have created regulatory confusion, political jousting and many lawsuits — three of which went all the way to the Supreme Court.

How did the phrase get into the bill? Three Capitol Hill staffers worked it up after a 30-minute huddle.

"It wasn’t a long conversation, but we decided to see where it would take us," Lester Edelman, former counsel to the House Public Works and Transportation Committee, recalled in a recent interview. "Little did we know, 45 years later they are still figuring it out."

It’s now the Trump administration’s turn to wrestle with that phrase. It does so in a 42-page proposal rolled out this week for sinking former President Obama’s 2015 Clean Water Rule, which aimed to clarify what wetlands and isolated streams get legal protection as "waters of the United States" (E&E News PM, June 27).

Edelman said he and his two colleagues — Leon Billings and Tom Jorling — did the best they could under deadline pressure, maintaining that "waters of the United States" has stood the test of time.

"I don’t think there is or was a paragraph or even tens of paragraphs we could have used instead of that phrase that would have avoided this kind of controversy," said Jorling, who was then Republican staff director for the Senate Public Works Subcommittee on Air and Water Pollution working for then-Rep. John Sherman Cooper (R-Ky.). "It’s messy, but it has survived."

With Congress needing to vote on the Clean Water Act conference report, Jorling and Billings, who worked for Sen. Ed Muskie (D-Maine), realized they had one last wrinkle to smooth.

The two staffers, who are credited with inventing much of the Clean Water Act’s regulatory infrastructure while carpooling daily to the Capitol from the Washington suburbs, envisioned the law as a break from previous iterations of the Federal Water Pollution Control Act.

While existing law set water quality standards for the nation’s waterways, Billings and Jorling wanted to regulate the source of pollution as it entered the water.

To do that, Jorling said, "We had to make the regulatory program match the hydrologic cycle."

But they had a problem.

That, says Jorling "was not going to achieve our objective."

Originating in English common law, the expression made its first American appearance in the 1899 Refuse Act, giving the Army Corps of Engineers control over dredging and filling of "navigable waters of the United States."

Over the years, its legal meaning evolved to include waters that could be made navigable with "reasonable expense," not just those a boat could travel.

By 1972, the phrase appeared in guidelines for many federal laws and agencies. EPA and the Army Corps already had their own definitions of which areas counted as "navigable waters of the U.S."

If agencies relied on those definitions, the Senate calculated at the time, the Clean Water Act would only protect 40 to 50 percent of the nation’s waterways.

As former chief counsel to the Army Corps, Edelman had a lot of experience parsing "navigable waters," and so Jorling and Billings turned to him.

Edelman was himself growing increasingly concerned about the definition.

The House-Senate conference committee had finally agreed to adopt Section 404 of the House bill, which maintained the Army Corps’ traditional authority over dredging and filling activities, even as the rest of the legislation made EPA the regulating agency for water pollution.

Edelman feared self-defining "navigable waters of the U.S." would result in bitter disputes between EPA and Army Corps over whose pre-existing explanation to use.

At the same time, the three staffers and their bosses were racing against the clock. The Clean Water Act legislation had been introduced almost two years prior, meaning it would die if it didn’t pass by the end of the session. President Nixon had threatened to veto the legislation, and Congress needed enough time for an override.

After 39 conference meetings ironing out the major regulatory differences between the House and Senate bills, "we were under the gun," Jorling recalled.

Jorling and Billings agreed, hoping it would be a sufficient signal to agencies that the bill was more expansive than existing law.

The trio’s work gave them an near-iconic status in the world of environmental law and the result of their short, 11th hour conversation lives on in the Clean Water Act conference report.

"The conferees fully intend that the term ‘navigable waters’ be given the broadest possible Constitutional interpretation unencumbered by agency determinations which have been made or may be made for administrative purposes," it says.

Billings died last fall. Jorling, who used to teach an environmental law class at Columbia University with Billings, is now retired. Edelman is a senior counsel for Dawson & Associates, a Washington lobby shop and consulting firm that specializes in water resources.

The new phrase, Dingell said in a recent interview, was critical to the success of the legislation, which ultimately became law after Congress overrode Nixon’s veto.

"We knew that if you were drinking water in New Orleans you were drinking what people had for dinner and flushed down their toilets in Minnesota a week or a month before," he said. "We knew water traveled with the stink in it all that way and we wanted to cover the whole process."

Not everyone was happy with the legislation’s scope.

In 1974, Army Corps and EPA came up with different definitions for "waters of the United States," with the corps arguing the Refuse Act still limited the agency’s jurisdiction to "navigable waters of the U.S."

That view was struck down less than a year later when the U.S. District Court for the District of Columbia ruled in Natural Resources Defense Council v. Callaway that Congress had "asserted federal jurisdiction over the nation’s waters to the maximum extent permissible under the Commerce Clause of the Constitution."

The Army Corps would have to write a new regulation taking into account "the full regulatory mandate" of the Clean Water Act.

That skirmish is one example of why Edelman said he assumed back in 1972 that Congress would eventually amend the Clean Water Act to devise a more specific explanation for "waters of the U.S."

Indeed, the original House version of the Clean Water Act amendments of 1977 included language limiting the law’s scope to the more traditional phrase "navigable waters." A proposed amendment to the Senate bill would have made a similar change.

But the conference committee again struck a deal. "We left the definition alone," Edelman said, in exchange for the Senate agreeing to exempt certain agricultural activities from dredging and filling restrictions.

‘Kennedy had it right’

Today, dredging and filling restrictions remain among the most controversial aspect of the Clean Water Act, especially for small waterways and wetlands. The question is raised time and again: Are they "waters of the United States"?

Agriculture, energy and construction trade groups have all argued the phrase has been interpreted too broadly, infringing on personal property rights and unreasonably preventing people from working on their own land.

But Jorling said there’s one man who understands what Congress meant by the term: Supreme Court Justice Anthony Kennedy.

Kennedy’s stand-alone opinion in the 2006 case Rapanos v. United States says wetlands and small waterways fall under federal jurisdiction if they have a "significant nexus" to a navigable waterway, meaning there must be a surface, chemical or biological connection.

The test echoes the Clean Water Act’s preamble that the law intends to "restore and maintain the chemical, physical and biological integrity of the nation’s waters."

"Kennedy had it right," Jorling said.

The Kennedy interpretation was ultimately the basis for the Obama administration’s Clean Water Rule defining "waters of the United States."

The Trump administration is now hoping to break from the Kennedy interpretation by replacing the Clean Water Rule with one inspired by Justice Antonin Scalia’s opinion in Rapanos. Scalia wrote that "waters of the U.S." only covers wetlands and small waterways with a surface connection to actually navigable waters.

That’s a nonsensical interpretation to Dingell, who also agrees with Kennedy.

"I thought people could read clear English," he said. "And I thought some of those contemptible scums on the Supreme Court could understand what it meant and why it was there and why Congress had acted to clean up our waters."

Even as Jorling favors Kennedy’s opinion, he said he was actually pleasantly surprised by Scalia’s because he had feared a conservative court would restrict federal jurisdiction to only navigable waters.

Billings, too, was apparently happy with the results of the case, as he told the Maine Law Review in 2014 during a speech celebrating Muskie.

"The Supreme Court has acknowledged a scope that is at least as far as we had imagined and, in my view, broader than we had reason to hope," he said.