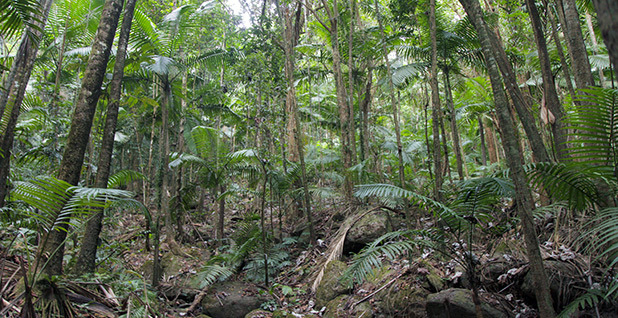 First of a four-part series.

Ignoring the brilliance all around, 22 scientists trudged through their forest with their eyes planted on the floor. At times, they picked up roots. Some were squishy to the touch; others gave off turpentinelike vapors that can be ignited even in a rainstorm.

This subterranean stuff will decide El Yunque’s fate as the planet warms in the Anthropocene, an age when humans have overcome nature as the prime shapers of the planet. And this forest, and other tropical ecosystems like the Amazon, will, in turn, dictate Earth’s future.

Over the next decade, the assembled scientists will learn how tropical forests work. They will translate their knowledge into algorithms and feed those into a new global climate model that will simulate the planet centuries from today. The model’s name, ACME, indicates both the perfection scientists are seeking and the steep climb to the peak.

Since 2010, boosted by a pro-climate-science president, the Department of Energy, the National Oceanic and Atmospheric Administration, NASA, and other federal agencies have invested hundreds of millions of dollars in earth science. From the equator to the Arctic, scientists are picking apart local ecosystems to figure out how the carbon cycle works. A vanguard in the effort is DOE’s 10-year, $100 million NGEE-Tropics initiative, which includes research happening at El Yunque.

Nations will meet in Paris this December to negotiate a new global agreement on climate change. Policymakers now know a few things for certain — that the world is warming and humans are responsible for it. They would like to limit temperature rise in 2100 to 3.6 degrees Fahrenheit above preindustrial levels. They know they have to cut CO2 emissions beginning immediately.

But their actions may well fall short of what is needed, in part because of the vast uncertainty about the local impacts of climate change and how quickly they will arrive. Will regions be drier or wetter in the future? Will hurricanes become more frequent?

"You want to be as accurate as possible and reduce uncertainty as much as possible," said Pierre Friedlingstein, a climate modeler at the United Kingdom’s University of Exeter. "If you know nothing about the future, I can guarantee you that you won’t do anything to change it. Because we don’t know."

To improve predictions, scientists have to better understand the carbon cycle. Only half the 10 gigatons of CO2 humans emit each year stays in the atmosphere as a warming blanket. The rest is stored in forests and the ocean. Scientists call these storehouses "carbon sinks."

"I don’t know if we can guarantee that sink forever," said James Butler, director of global monitoring at NOAA’s Earth System Research Laboratory. There are already rumblings in the scientific community that sinks are getting saturated. If that turns out to be right, more CO2 will remain in the atmosphere in the future, requiring nations to execute a midcentury pivot toward fewer emissions to meet the 3.6 F target.

Probing the many mysteries of forests

At El Yunque, Jean Lodge was beaming an infectious enthusiasm for deciphering the forest’s secrets. Lodge, 62, is a botanist with the Forest Service, and she moved to Puerto Rico in 1983 to work as a fungi taxonomist. She later began experiments at El Yunque that involved getting into the "heads" of fungi, which are neither plants nor animals, and figuring out their survival strategies. Along the way, she has described 50 new species of fungi and has 50 more tucked away in boxes, waiting to be described. Her colleagues call her a human bar-code scanner for tropical species.

That sultry afternoon, she showed off the rainforest to visiting climate modelers and ecologists. The scientists had spent the previous day in an excessively air-conditioned hotel conference room in San Juan discussing how tropical forests will change in a warming world. Outside, the sun blazed down on tourists lounging by the sea.

Since 1771, when Joseph Priestley trapped a mouse with a mint plant in a glass jar and watched both grow, scientists have known that CO2 is plant food. Forests have doubled their uptake of CO2 since the 1980s and are growing.

Much of this uptake is happening in the tropics, but precisely how much is hard to say. Forests here are among the least observed ecosystems on the planet. Scientists monitor only about 1,000 sites in a region that covers 40 percent of the Earth’s land area. In comparison, there are 3 million plots in the midlatitudes where scientists inventory forests.

"Most of the tropical rainforests are not observed at all; there is no one out there watching them," said David Schimel, an ecologist with NASA’s Jet Propulsion Laboratory.

NASA launched the Orbiting Carbon Observatory-2 (OCO-2) satellite last year that can, in theory, monitor forests. But OCO-2 cannot see very well through clouds, a problem since the tropics are often overcast.

Yude Pan, a self-effacing Forest Service researcher, recognized in 2007 that scientists did not really know how forests are faring. She got scientists from different nations to assemble in a room in Beijing in 2009. The scientists shared classified national forest inventory data with Pan, who was tasked with generating a global inventory.

"I was the junior scientist among the experts’ group," she recalled. "They were just so busy, they said, ‘Let Yude do it.’"

Her landmark analysis found that, between 2000 and 2007, tropical forests usually functioned like a giant vacuum cleaner, sucking up about 13 percent of all the CO2 emitted by humans.

Can fungi rescue a dying forest?

It is doubtful these sinks will last forever. Scientists think some tropical forests have already become less robust carbon trappers. Trees in the Amazon have been dying at a faster rate since the 1980s and are not growing as quickly, according to a recent study. Scientists in Panama and Malaysia have also noticed that the growth rate of tree trunks has declined over the past 30 years.

Drought, warming or nutrient limitation could be causing these changes. For instance, a "Godzilla" El Niño is presently roiling the tropics, making entire trees wilt in a dry year, said Richard Norby, an ecologist at the Oak Ridge National Laboratory (ORNL) and a project lead for NGEE-Tropics.

At El Yunque, Norby and his colleagues are looking at how tree roots absorb nutrients, particularly phosphorus.

"There is very strong support that many tropical forests are phosphorus limited," he said.

When Hurricane Hugo lashed Puerto Rico in 1989, it killed 12 people and took to El Yunque like an electric hedge trimmer, blowing off leaves, branches and even entire trees. Seizing the opportunity, Lodge and her colleagues sectioned off three plots, from which they removed woody debris and added in fertilizer. They left a fourth plot untouched, where microbes decomposed the dead matter and hoarded all the nutrients, making it unavailable to new vegetation.

Three years later, the fertilized plots were green with foliage. The fourth plot had little vegetation and was rather sad looking, Lodge recalled.

This June, she demonstrated the importance of phosphorus to the visiting scientists. She held out a bunch of dead leaves that were woven together by the black wiry projections of a pinwheel mushroom fungus. The fungus carries phosphorus with it as it moves across the forest floor, which gives it a competitive edge over other species.

The fungi "shove most of the other microorganisms out and basically take over the forest," Lodge said. Towering trees send their roots into the fungi’s matted leaf mass and snatch some phosphorus away. By making the nutrient available to trees, fungi help forests trap CO2.

It’s a tough gig, she explained the previous night, her words nearly drowned out by electronic music at a seaside bar in San Juan where the scientists had decamped after a hard day’s work.

ACME is a type of climate model that includes the carbon cycle. There are 11 such "earth system models," where scientists input human CO2 emissions, and the model partitions them among the atmosphere, land and ocean. After crunching terrabytes of data, the model reveals the concentrations of CO2 in the atmosphere and the associated warming centuries later. Unlike earlier-generation models, these models allow the carbon cycle to change with global warming.

"But [earth system models are] not perfect models since we’re not considering a lot of other things — for example, phosphorus," Yang said.

All these models agree that carbon sinks, broadly defined, will become less efficient due to climate change. But when scientists probe details, these models produce divergent results. Their algorithms representing key ecosystems such as tropical forests are probably too simplistic, said Friedlingstein of the University of Exeter. Some models find tropical forests will lose carbon, while others say the opposite. Fixing these components will also improve other model projections, such as hurricanes, droughts and other weather phenomena.

"You want to know, will we get more rainfall in this region? You want to know if there will be more heat waves in the future, how frequent will it be? We need to understand this, we need to be able to project this," said Friedlingstein.

Adding in phosphorus may improve the representation of the tropical sink, though Yang doesn’t know by how much. A few years ago, scientists added nitrogen, which limits temperate forest growth, into climate models. The change increased the CO2 concentration in the atmosphere in 2100 by up to 60 parts per million, said Peter Thornton, a climate modeler working on the ACME project at ORNL.

The overall goal of NGEE-Tropics, then, is to reduce the uncertainty of climate projections by better understanding how the tropical sink functions. With a nod to former Defense Secretary Donald Rumsfeld, modelers acknowledge that the effort depends on getting the known unknowns, such as phosphorus, into the models.

As for the unknown unknowns, they’ll worry about them later.