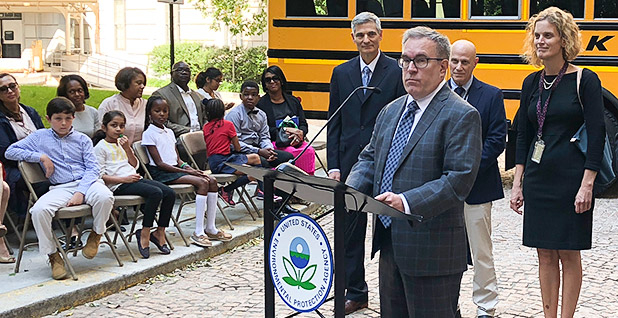 "That is why we are here today, is to get the word out on EPA’s many programs and grants that can help states, local governments and schools protect our nation’s children," Wheeler said at a press event today. He said several programs and offices at EPA, including its Office of Children’s Health Protection, are geared toward reducing hazards like lead and other toxins that can harm kids.

Wheeler, joined by representatives of the National Environmental Education Foundation, Diesel Technology Forum and National School Transportation Association, spoke to a crowd of career EPA staff as well as a dozen students and parents in the courtyard outside EPA’s Washington headquarters.

He pointed to a school bus parked behind him, noting it was equipped with a clean diesel engine thanks to EPA funding. EPA released $9 million more in rebates today that can be used to upgrade school buses that have older engines. The agency also announced a new $20 million grant program to help states and tribes test for lead in drinking water at schools and child care facilities.

Today’s event came after last week’s move by EPA to place Ruth Etzel, director of its Office of Children’s Health Protection, on administrative leave. The personnel action sparked questions about whether Etzel’s office will survive under plans to reorganize the agency.

At the event, Wheeler denied such rumors, saying that "nothing could be further from the truth" and that the employees in that office "have been performing outstandingly." He also said Etzel’s leave "has nothing to do with the good work of that office."

In a statement Friday, EPA Chief of Staff Ryan Jackson provided a few more details. He said Etzel, a longtime public health expert who joined EPA in 2015, was put on leave while the agency reviews "allegations" about her leadership of the office.

"Although EPA does not customarily comment on personnel matters, due to circulating misinformation, the Director of EPA’s Office of Children’s Health Protection was placed on leave to give the Agency the opportunity to review allegations about the Director’s leadership of the office," Jackson said.

Several current and former EPA employees could not detail those allegations when contacted by E&E News. One former staffer said there were concerns within the agency about Etzel’s management when Gina McCarthy served as administrator.

Etzel has a different take about why she was placed on leave.

BuzzFeed reported last week that Etzel has cited policy reasons for her being sidelined.

"I appear to be the ‘fall guy’ for their plan to ‘disappear’ the office of children’s health," Etzel said in an email that was shared with academics and advocates.

OCHP was established in 1997 following an executive order from President Clinton directing federal agencies to study and find ways to minimize the disproportionate risks toxins can pose to children.

Betsy Southerland, who resigned last year from her post leading the EPA water office’s Office of Science and Technology, said the OCHP plays an instrumental role in making sure agency regulations address risks to children.

OCHP staffers are usually involved in rulemaking decisions, she said, and "will make you show your work" if a standard is based on risks to adults versus risks to children.

Southerland said the office was particularly helpful in 2016 when she put together a fish consumption advisory for pregnant women and children with the Food and Drug Administration.

"They were the ones making sure that we had the proportions right, making sure what we were recommending was really protective of children," she said.

That’s not the case with all rulemakings. GAO reports from 2008 and 2010 found that OCHP had "no regular involvement in the Office of Pesticide Program’s decision-making" about pesticide residues.

Ronnie Levin, a former EPA staffer who now manages the water and health program at Harvard University’s T.H. Chan School of Public Health, said she has been disappointed by OCHP’s influence in drinking water regulations.

EPA also released a booklet today highlighting the agency’s "commitment to children’s health." It describes why children are more vulnerable to environmental health risks and lists initiatives EPA has taken to reduce risks.

Those include programs for removing polychlorinated biphenyls and asbestos from schools.

But some of the programs listed in the booklet have been sluggish to act.

For example, it highlights the "federal lead strategy," which EPA has been working on with a number of agencies included on the President’s Task Force on Environmental Health Risks and Safety Risks to Children, of which Etzel has been a co-chair.

The strategy has been in development for over a year, but progress stalled over the summer. Asked about the strategy today, Wheeler noted the third week of October is National Lead Poisoning Prevention Week and said, "Please stay tuned."

The booklet also highlights EPA’s Water Infrastructure Finance and Innovation Act program, which provides low-interest loans to communities looking to replace lead pipes. But it does not mention that EPA has been working to revise its lead in drinking water standards since 2010.