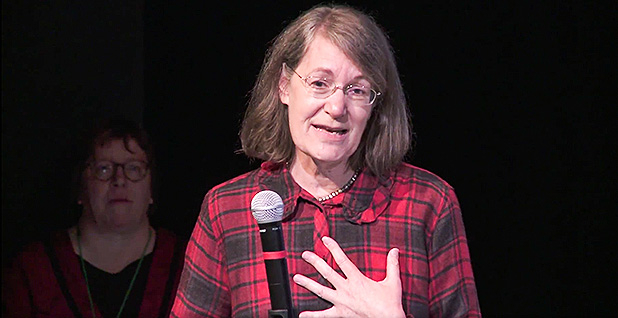 Office of Children’s Health Protection chief Ruth Etzel requested to meet with Wheeler every week throughout August and September to discuss the federal lead strategy that EPA is drafting with public health agencies, but she was unable to meet with the administrator.

While public health experts have been clamoring to see the lead strategy — which was originally scheduled for release in June — questions about it have swirled since EPA placed Etzel on leave last month for what spokeswoman Molly Block called "serious reports made against her by staff regarding her ability to effectively lead the Office of Children’s Health."

Etzel herself has said in multiple television interviews that she believes EPA ousted her because of disagreements over the lead strategy. Speaking to CBS News this week, she said an EPA political appointee had told her proposed regulations to combat lead poisoning in the strategy "wouldn’t fly" (Greenwire, Oct. 15).

While she has said she wasn’t given an explanation before EPA placed her on leave, Etzel told CNN this week that the lead strategy "was just about to come out when this happened, so I think perhaps it’s related to that strategy."

Block strongly denied Etzel’s allegations, writing in an email that "the kinds of allegations that have been raised regarding Dr. Etzel’s conduct are very concerning and prompted EPA to take action."

"Her attempt to use the press to distract from the allegations about her personal conduct is completely inappropriate," she said. "Any link that Dr. Etzel is attempting to draw between her personal situation and the mission of the Office of Children’s Health is an attempt at misdirection. EPA is 100 percent committed to protecting children’s health and will do everything in its power to ensure that the Office has competent leadership."

But sources told E&E News that neither Wheeler nor his acting deputy, Henry Darwin, have met to discuss the strategy with Michael Firestone, who has been in charge of the Office of Children’s Health Protection and spearheading the strategy since Etzel was placed on leave.

Block didn’t respond to questions about whether EPA leadership had met with Firestone but noted that the Trump administration brought on Hayley Hughes as a national lead coordinator. She has met, she said, with both Wheeler and former Administrator Scott Pruitt in her role "spearheading all lead related activity across the Agency, including the Office of Children’s Health Protection."

The Trump administration has long said that combating lead poisoning is a priority, with Pruitt declaring EPA would wage a "war on lead."

But critics say they have seen little action, noting Wheeler has yet to use that phrase.

"Pruitt says anything he wants, and Wheeler doesn’t say anything, but if you look at their actions, what they say or don’t say doesn’t make any difference; they still aren’t doing anything," said Ronnie Levin, a former EPA staffer who now manages the water and health program at Harvard University’s T.H. Chan School of Public Health.

EPA’s critics say Etzel’s being placed on leave is just the latest example of the agency not doing enough to protect children from lead, a potent neurotoxin linked to learning disabilities.

The delay of the federal lead strategy, they say, is another.

Whether the current draft of the strategy includes any calls to beef up regulations is unclear.

But the interagency work group charged with drafting the strategy, which Etzel led, is basing the document on a November 2016 report that outlined "key federal programs to reduce childhood lead exposure and eliminate associated health impacts."

Nearly half of the 2016 document describes different regulatory efforts across the government, including EPA, the Department of Health and Human Services, the Department of Housing and Urban Development, and the Centers for Disease Control and Prevention.

The Environmental Defense Fund’s Tom Neltner, a member of a committee advising EPA on children’s health, said he will be watching closely to see what is in the strategy and whether it is "a call to action with measurable goals or a list of things we do wrapped up and called a strategy."

"The question is whether the first step in the ‘war on lead’ is really a retreat," he said.

Asked about the strategy at an advisory committee meeting last week, EPA’s Firestone said it would come out "soon" and that the delay was due to bureaucratic challenges of so many agencies working together.

"It’s probably the most complicated thing I’ve worked on in my career," said Firestone, who has worked at EPA for 30 years.

Public health advocates say an aggressive lead strategy could serve as a catalyst for stronger policies and more funding for lead poisoning prevention.

David Jacobs previously ran the Department of Housing and Urban Development’s lead-in-homes program between 1995 and 2005 and helped work on the previous federal lead strategy, which was released in 2000.

The strategy called for increased funding to remove lead paint from homes and looked at how revamped regulations and tougher enforcement could help combat what is still the leading cause of lead poisoning for kids.

After it was published, Congress increased appropriations for lead programs.

"A federal strategy did make a difference," said Jacobs, who is now chief scientist for the nonprofit National Center for Healthy Housing.

The Trump administration has also postponed action on a number of regulations that could reduce lead exposure.

EPA has also indefinitely put off regulating lead dust in public buildings, like restaurants and after-school programs, and an endangerment finding for lead in aviation fuel.

To comply with a court-ordered deadline, the agency did propose new lead dust standards for homes in June. But advocates have heavily criticized that rule for being ineffective.

The proposal would significantly lower the acceptable lead-dust level for risk assessments used to determine whether lead paint needs to be removed from a home. But it doesn’t change "clearance levels" of lead, which are used to determine whether a cleanup has actually lowered the risk of lead exposure. Those numbers are traditionally the same to ensure that lead paint removal actually lowers the risk of lead poisoning.

"It makes no sense," Jacobs said. "EPA is saying that it’s OK for the risk of exposure to be higher after your cleanup job than it was before. If you do a hazard control, you expect the hazard to go down, not up."

Lynn Goldman, dean of the Milken Institute School of Public Health at George Washington University, who helped establish EPA’s Office of Children’s Health in the 1990s, agreed with Jacobs about EPA’s stance on risk.

"The standards they are replacing were developed when I was at EPA," she said. "For it to take so long for them to come out, and for them to be so weak, is incredibly disappointing."

Asked about criticisms of the lead dust standards, EPA spokeswoman Block said the Trump administration is acting when the Obama administration didn’t.

"Critics were provided a 45-day comment period on the proposal [that lowers the lead dust hazard standard], which is 45 more days than the non-existent proposal never issued under the 8 years of the Obama administration," she said in an email.

She didn’t respond to questions about the delayed regulations but touted a number of EPA efforts aimed at lead, writing, "Here are some of the things you’ve missed during the last 22 months."

Those included progress removing lead from homes at the USS Lead Superfund site in East Chicago, Ind., with Block saying there has been a 316 percent increase in properties cleaned between 2016 and 2017, "all thanks to the Trump administration’s focus and prioritization of remediating the country’s most contaminated Superfund sites."

She also highlighted a new $20 million grant program for states and tribes to test for lead in drinking water and noted that Trump’s EPA awarded $100 million to Flint, Mich., to replace lead pipes. That money was designated for the purpose by Congress in the 2016 water infrastructure authorization bill.