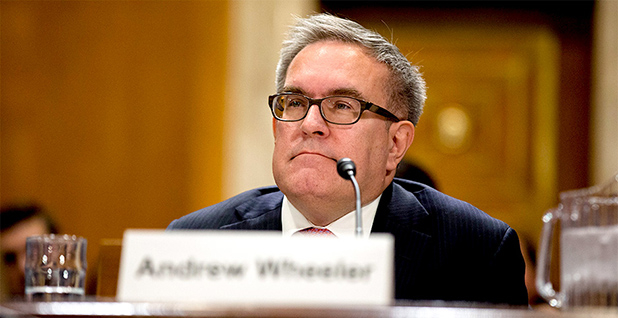 The emails offer a window into how Wheeler — who became acting EPA chief Monday after Administrator Scott Pruitt’s resignation — might solicit support if President Trump nominates him as permanent agency boss.

Under the Federal Vacancies Reform Act, Wheeler can remain as acting administrator for 210 days, and that time can be extended depending on when Trump decides to nominate a replacement.

Senate Republicans say they’re in no rush to tackle a bitter confirmation fight to replace Pruitt, given the looming battle over Trump’s Supreme Court nominee, Brett Kavanaugh. But the Senate could eventually consider Wheeler as a replacement after the November midterm elections.

According to the emails, which were released to the Sierra Club following Freedom of Information Act litigation, here are five players with whom Wheeler interacted before his April confirmation as deputy EPA chief:

Senate Majority Leader Mitch McConnell (R-Ky.) signaled last November that he wanted to move Wheeler’s nomination to the floor after his consideration by the Senate Environment and Public Works Committee.

Staffers in EPA’s Office of Congressional and Intergovernmental Relations then strategized about what lawmakers Wheeler should meet.

Chief among their recommendations: moderates from both parties.

"Andy — as things stand now, McConnell would like to move your nomination to the floor shortly after your 11/29 markup," wrote Troy Lyons, the office’s associate administrator.

"I would like to offer meetings to a number of committee members. Once you are in the door we will have a more robust engagement plan for you to include both the House and the Senate. For the time being, I would like to set up meetings with the following Members."

About a week and a half later, Kaitlyn Shimmin of the intergovernmental relations office followed up with Wheeler on the status of the requests.

"Manchin — No Response (plan to call tomorrow to push for a meeting)," Shimmin wrote.

When the Senate did confirm Wheeler as deputy EPA administrator on a 53-45 vote in April, it was thanks to several moderates whom the agency had contacted. Heitkamp, Manchin, Donnelly and Collins all voted for him.

On the one-year anniversary of the 2016 presidential election, Wheeler got an email from former Rep. Mary Bono (R-Calif.), who was then Wheeler’s colleague at Faegre Baker Daniels Consulting, about her dinner with Sen. Lindsey Graham (R-S.C.).

"At dinner with Lindsey Graham. He said he’s looking forward to voting for you," wrote Bono, a principal at the firm, on Nov. 8 of last year.

EPA redacted the following message from Wheeler in its release to the Sierra Club. But the message prompted Jackson to quip, "You’re golden. This will be good. Glad you hate making money."

If tapped as permanent EPA administrator, Wheeler would need all Senate Republicans to back him. The Senate GOP’s narrow majority, 51 to 49, shrinks to a single vote with Sen. John McCain (R-Ariz.) out indefinitely as he battles brain cancer.

Last fall, Wheeler inquired about obtaining a statement of support from former Sen. Joe Lieberman (I-Conn.), a former Democrat who has eschewed traditional party lines. Lieberman served in the Senate from 1989 to 2013.

As a former aide to Sen. Jim Inhofe (R-Okla.), Wheeler worked with Lieberman on addressing the health effects arising from the 9/11 terrorist attacks. In the months after the attacks, dust from the collapsed World Trade Center contributed to more New Yorkers reporting respiratory illnesses.

At the time, Lieberman was a Democrat on the Senate Environment and Public Works Committee. He now identifies as an independent.

"I hate to impose on you, but I was just told I will be nominated [for deputy administrator] this week, perhaps as soon as tomorrow," Wheeler wrote to Lieberman’s former chief of staff last October.

"Do you think Senator Lieberman would be willing to go on record and say something like ‘I worked with Andrew on the 911 air issues, he’s professional and deserves fair consideration.’ I’m not asking for an endorsement but there are so few Democrats left on EPW that I actually worked with."

The former chief of staff, Clarine Nardi Riddle, responded that she would look into the request.

After some back-and-forth, Riddle provided the following statement from Lieberman: "Andrew was Republican staff director during part of the time I was on the Senate Environment Committee. We worked together on some issues and disagreed on others. He conducted himself in a fair and professional manner. I hope his nomination will receive similarly fair consideration by the Senate."

Wheeler appeared pleased with the quote, forwarding it to Shimmin. The quote later appeared in an EPA news release that said Wheeler’s nomination was "receiving high accolades from across the country."

In another email last October, Wheeler sent EPA’s Office of Congressional and Intergovernmental Relations the names and contact information of several industry leaders who could provide complimentary quotes about him.

Wheeler would be "an outstanding choice to join the leadership at the EPA," Timmons said, citing his "extensive background working on environmental and natural resource policy."

Wheeler notably didn’t reach out to Murray Energy Corp., which was his client as a lobbyist with Faegre Baker Daniels Consulting. Environmental groups are now opposing Wheeler on the grounds that he’s too cozy with industry, citing his ties to coal mining executive Bob Murray, who is currently pushing the Trump administration for favorable federal treatment to bail out struggling coal plants.

Wheeler would likely reach out to ethanol advocates again if tapped as permanent EPA boss.

In contrast, Wheeler was once a consultant for Growth Energy, the ethanol industry group.

Ethanol advocates are cheering Pruitt’s departure, saying it gives them a second chance at biofuel-friendly policies with the Trump administration (Greenwire, July 6).

While not technically seeking his support, Wheeler swapped jokes with the EPA chief of staff as they worked through the confirmation process last year.

In an exchange with Jackson last fall, Wheeler poked fun at the idea that he was a "controversial" nominee.

The nominee in the story wasn’t Wheeler, but rather Kathleen Hartnett White, President Trump’s pick to lead the Council on Environmental Quality.

"I guess this means you’re not a controversial nominee. Congratulations," Jackson wrote.

Wheeler responded about the headline, "I’m sure he meant to say two."

If tapped as permanent EPA boss, Wheeler would again work through the confirmation process with Jackson by his side. But Hartnett White wouldn’t be around as a distraction, ensuring that lawmakers would approach Wheeler with intense scrutiny and tough questions.