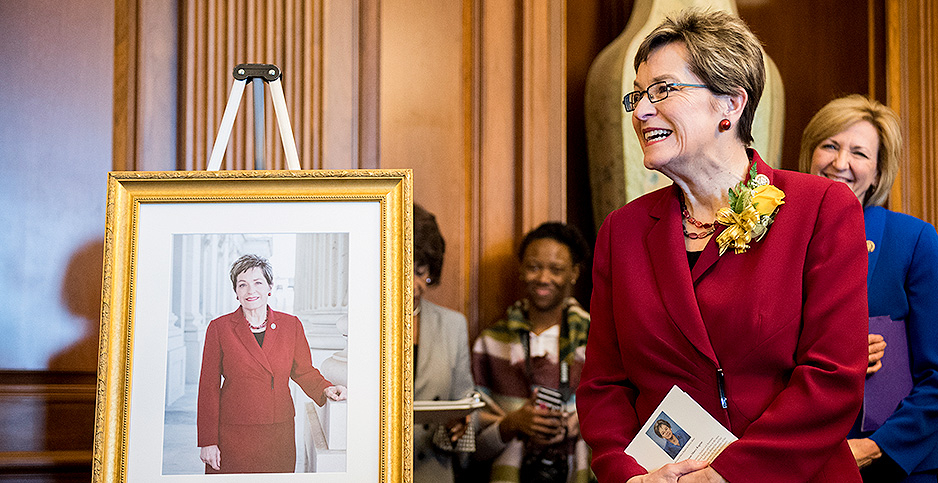 Rep. Marcy Kaptur (D-Ohio) attending a reception in her honor last year as she became the longest-serving woman in House history. Kaptur says she is worried about climate change disrupting the boundaries of her congressional district. Bill Clark/CQ Roll Call/Newscom

The longest-serving woman in U.S. House history is worried that climate change could help Republicans take a bite out of her northeast Ohio district.

Democratic Rep. Marcy Kaptur, a 19-term incumbent who has used her seniority on the House Appropriations Committee to steer money to the Great Lakes, believes rising water levels on Lake Erie could bisect her shoreline district, physically severing the western third of her constituency.

She may be right.

Scientists say that fluctuating water levels, not only on Erie but all the Great Lakes, will be one of the primary signatures of climate change on the world’s largest freshwater ecosystem.

"There’s no question the shore of Lake Erie between Toledo and Cleveland is going to become more susceptible to flooding,” said Christopher Winslow, director of the Ohio Sea Grant program and Stone Laboratory, the Great Lakes research campus of Ohio State University on Erie’s Gibraltar Island.

Lake Erie, the shallowest of the five lakes, is already experiencing those effects. Floodwaters regularly inundate low-lying areas east of Toledo, where the remnants of what used to be known as the Great Black Swamp cover nearly 9,000 acres of forested wetlands. Much of the former swamp is now managed as the Ottawa National Wildlife Refuge and Magee Marsh Wildlife Area.

"That section is one of the thinnest parts of her district, if not the thinnest," said Griffin Anderson, Kaptur’s communications director. "When we see lake levels rise like they are now and we get strong winds coming off the lake, that whole area floods and it becomes impossible to drive from one end of the district to the other."

So what? Other U.S. congressional districts are noncontiguous, including Maryland’s 3rd District, which includes the capital region of Annapolis, then leapfrogs the Magothy River to Goose Island and again over the Patapsco River into Baltimore County.

But Maryland is not controlled by a Republican legislature like Ohio, where lawmakers are redrawing congressional districts after a lawsuit challenged the current Ohio map, which also favors Republicans.

The Buckeye State has some of the most gerrymandered districts in the country, including Kaptur’s, whose 140-mile-long patchwork of shoreline communities between Cleveland and Toledo is nicknamed "the Snake on the Lake."

A panel of federal judges in Cincinnati ruled the current congressional boundaries are illegal. The state appealed to the Supreme Court. Justices stayed any Ohio redistricting plan until they review the lower court’s ruling and similar cases from Maryland and North Carolina. A decision is expected as early as today.

David Nevin, a University of Cincinnati political scientist and expert on Ohio gerrymandering, said Ohio’s 9th District is the state’s "most infamous district, both in shape and intent."

The district’s current boundaries were redrawn in 2010, again by a Republican-controlled legislature, to pit two long-term Democrats, Kaptur of Toledo and former Rep. Dennis Kucinich of Cleveland, against one another in the 2012 primary election. Kaptur won.

Now Kaptur is concerned about another redistricting plan that could alter her district again. Only this time climate change could be a co-conspirator if the shoreline east of Toledo is in fact breeched by rising water.

"It doesn’t keep her up at night, but it is a concern," said Anderson. Kaptur was not available for an interview.

"It’s not a prediction anymore," Winslow said. "The high water we’re seeing in the lake now could be with us for a while. The latest research suggests the lakes will see high variability — both record lows and record highs — but obviously we’re more concerned about the highs."

Drew Gronewold, a University of Michigan hydrologist and expert on Great Lakes water dynamics, said high water is often caused by increases in precipitation and snow melt across the basin. But it’s more complicated than that.

Between the late 1990s and 2013, he said, the Great Lakes underwent a period of low water caused by below-average precipitation as well as evaporation, which accounts for a significant portion of water loss from the lakes each year.

But after 2014, the climate shifted, producing above-average precipitation and warmer water across the basin. Gronewold described this as "tug of war" between two natural forces.

"If any one of those forces has an induced variability," he said, "you’re likely to have pronounced shift in the water regime."

The induced variability was a series of polar vortexes beginning in 2015. Arctic air descended over the Great Lakes and substantially chilled what had been warmer-than-average water.

"The water got really cold and we had less evaporation," Gronewold said. "At the same time, we continued to see more precipitation from 2014 to 2016."

On top of that, Lake Erie has a unique set of climate issues related to its depth and east-west orientation. It is the fourth-largest Great Lake by surface area and the shallowest by far, averaging 62 feet compared to Lake Superior’s average depth of 483 feet.

In part due to warming air temperatures, extreme weather and windstorms are growing stronger across the lake, creating what scientists call "seiche events." That’s when strong westerly winds push Lake Erie water toward the east end of the lake, raising shoreline lake levels near Buffalo, N.Y., by 3 to 6 feet. As the wind subsides, the water sloshes back to the west, creating a tidal effect along the southwest side of the lake that can lead to inundation of low areas.

"People in Toledo have dealt with these things over time," Gronewold said. "But it’s different when water levels are high. Lake levels can rise by several feet over a few hours, and the sloshing can last for a day or two. When this happens, people on Lake Erie start to notice.

"What we’re likely to see in low-lying areas like Sandusky and Port Clinton is more extensive inundation," he said. "This area is very low, very flat and very susceptible to high water conditions."

Those areas also happen to be the buckle of Kaptur’s belt-line district.

Among the chief concerns, both for Kaptur and fellow Democrats, is that a noncontiguous 9th District will be gerrymandered again. Only this time, the central lakeshore will be carved from Kaptur’s district and grafted onto a neighboring one — like the adjacent 4th District, currently represented by Republican Rep. Jim Jordan, one of the House’s most conservative members.

"It’s impossible to know what the district would look like in a redraw," Kaptur’s spokesman Anderson said. "When this first came up, our chief of staff drove out to Toledo to take a look at it. The bottom line is we just don’t know. But it’s a super interesting perspective on the intersection of how climate change could affect map-making and congressional districting."

Nevin, the political scientist, said the concern might not be hypothetical, given what he described as the state Legislature’s "blatant efforts" to make Ohio a more deeply red state. Currently, four of Ohio’s 16 House districts are represented by Democrats, while its Senate delegation is split between Republican Rob Portman and Democrat Sherrod Brown.

Under a new district map, Nevin said, Kaptur’s district could be reoriented around the Toledo metropolitan area, with 604,000 people, and surrounding counties. A Cleveland-centered district could also remain under Democratic control. Rep. Marcia Fudge (D) currently represents the city’s east side and adjoining suburbs.

Nevin said that under a redistricting plan that gives a portion of the lakefront to a Republican, Kaptur’s long interest in climate change and environmental protection of Lake Erie could become an afterthought.

"I think it really is an interesting example of the unintended consequences of perverse mapmaking that they created a district that is so heavily dependent on the health of the lake, and therefore climate change," he said. "Most Ohioans don’t live near the lake, and many of them don’t think about it."