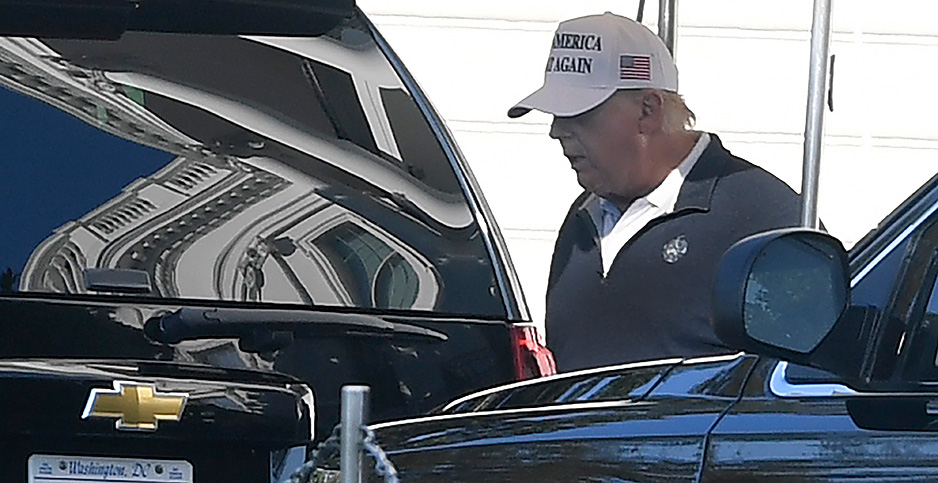 President Trump departs the White House on Sunday for a round of golf. Mike Theiler / Pool via CNP / SplashNews/Newscom

The Trump administration is focused on promoting climate denial even as it counts down the president’s final days.

The Trump team is preparing to appoint a climate denier to head development of the National Climate Assessment for the next two months, a key step that involves contracting scientists to write it, according to advisers close to the White House. Those contracts could be structured to keep researchers who reject climate science in place after President-elect Joe Biden takes office in January.

On Friday, the administration quietly removed Michael Kuperberg from his job as executive director of the U.S. Global Change Research Program (GCRP), according to two sources with knowledge of the move. The program comprises the 13 federal agencies that conduct or use climate research.

Kuperberg has served in the role for years and was recently advancing the latest version of the National Climate Assessment even after it faced delays from the White House.

Kuperberg was transferred back to the Department of Energy, said Don Wuebbles, a climate scientist at the University of Illinois who co-led the first volume of the fourth climate assessment.

"He was basically told your detail was ended and go back to DOE," Wuebbles said after speaking with Kuperberg. "It seems very strange to me, right after the election. You waited four years, and Mike has done a great job of running this."

Meanwhile, planning has been underway for weeks to appoint NOAA’s David Legates, a climate change denier recently named as deputy assistant Commerce secretary for observation and prediction, to replace Kuperberg, said Myron Ebell, the head of President Trump’s EPA transition team and director of the Center for Energy and Environment at the Competitive Enterprise Institute.

Legates is a geologist from the University of Delaware and an affiliate of the Heartland Institute, which exists to muddy the public’s understanding of climate change. He has said burning more fossil fuels would benefit humanity and that policy to mitigate greenhouse gas emissions is a regulatory scheme that runs counter to market principles.

"They’re still in office for two months, so they’re going to plow ahead," Ebell said. "Every administration tries to get as many things out the door before the next administration takes over as possible, so maybe there are things you can at GCRP that you can get out the door and it will be hard to take them back."

The appointment of Legates would come right as the climate assessment is recruiting scientists to work on the report. The recruitment of authors was delayed for months but has proceeded in recent weeks. Legates could bring in researchers who criticize consensus climate science and get contracts to perform work on the project even after Biden takes office in January. Ebell said a plan had been discussed to put Legates in place this week.

The National Climate Assessment has been a target for the Trump administration ever since the latest version was released in November 2018.

The administration tried to bury the report by releasing it the day after Thanksgiving, and Trump, who later said he did not "believe" the report, was angry that it had been released at all. The White House then planned a hostile "red team, blue team" review of the assessment, but that effort was later scrapped by administration and campaign officials concerned about political optics before the election.

The assessment is congressionally mandated to be produced every four years, and the next version will be its fifth iteration and is scheduled to be released in 2022. The report has a history of Republican administrations, starting when the George W. Bush White House interfered with the release of the first version.

The Trump White House has named Betsy Weatherhead, currently a senior scientist at Jupiter Intelligence, a company that helps businesses prepare for climate change, to serve as the project lead, The Washington Post has reported. Weatherhead accepts climate science and has contributed to the reports by the Intergovernmental Panel on Climate Change. The White House wants Legates to have oversight over her.

A total overhaul of the National Climate Assessment to highlight doubt and downplay certainty was planned for Trump’s second term, Ebell said. It could have been used to go after the endangerment finding, which is the body of science that undergirds federal climate regulations.

The late appointments are happening even if there are only two months left in the administration because the White House Office of Presidential Personnel, led by John McEntee, is still focused on rooting out federal employees who have been insufficiently loyal to Trump, Ebell said.

"They’ve been going through things and getting better people in — not better in terms of, you know, higher educational qualifications or intelligence or experience, but people who are qualified and support the Trump agenda — and of course David is a great choice, but he’s highly qualified," Ebell said.