White House records pull back the curtain on climate meetings 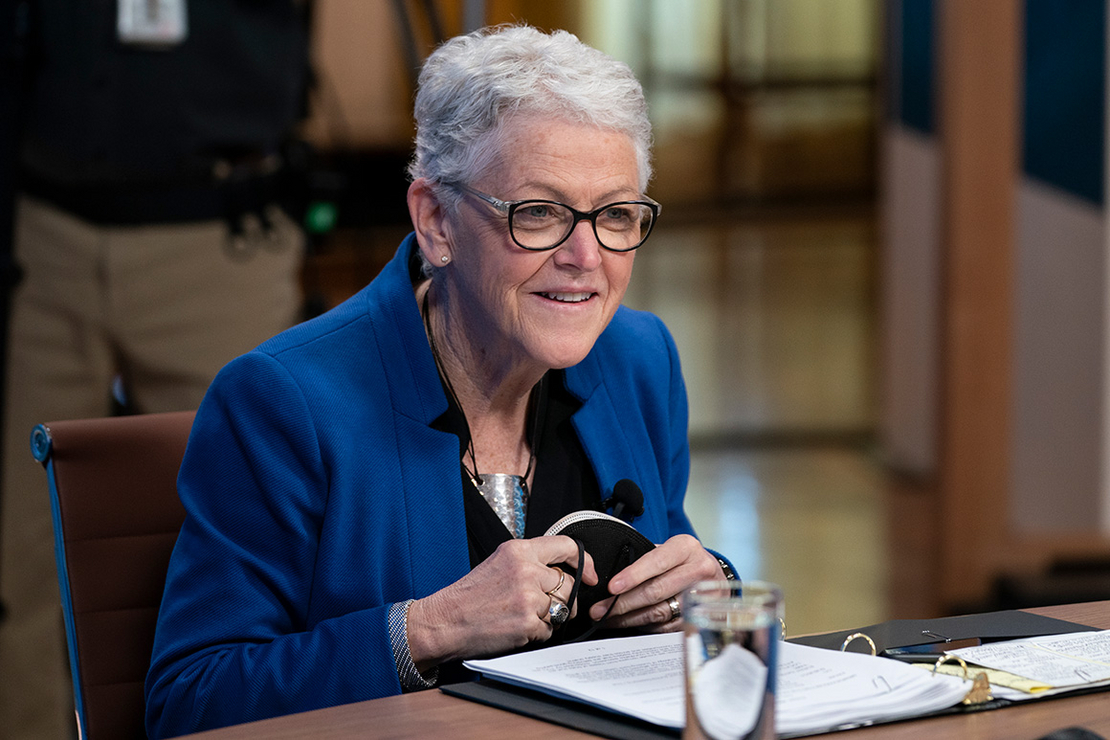 National climate adviser Gina McCarthy waits for the arrival of President Joe Biden to speak to the virtual Leaders Summit on Climate, from the East Room of the White House on April 23, 2021, in Washington. Evan Vucci/AP Photo

Sixteen prominent environmentalists, including the heads of the Natural Resources Defense Council, the Sierra Club and Earthjustice, convened with McCarthy and other Biden White House officials in room 230A of the Eisenhower Executive Office Building next to the West Wing, according to visitor logs recently released by the administration.

The meeting of environmental heavy hitters stands out in part because it’s one of the few in-person meetings McCarthy hosted at the White House last year, according to visitor logs for the executive complex, the most recent of which were released to the public last earlier this month.

The roster for the meeting — the biggest group the records show McCarthy hosting during her first year on the job — also indicates which climate change advocates have the ear of top Biden aides. Vice President Kamala Harris and McCarthy’s deputy, Ali Zaidi, also attended the meeting, according to a White House spokesperson.

The guest list: John Podesta of the Center for American Progress, Tom Steyer of NextGen America, Kathleen Welch of Corridor Partners, Deborah Brown of the American Lung Association, Michael Brune of the Sierra Club, Wendy Wendlandt of Environment America, Peggy Shepard of WE ACT for Environmental Justice, Gene Karpinski of the League of Conservation Voters, Johanna Chao Kreilick of the Union of Concerned Scientists, Margie Alt of the Climate Action Campaign, Manish Bapna of NRDC, Fred Krupp of the Environmental Defense Fund, Collin O’Mara of the National Wildlife Federation, Elena Rios of the National Hispanic Medical Association, Ari Appel of Building Back Together, and Abigail Dillen of Earthjustice.

The participants remain tight-lipped about what happened in that closed-door session. Many of them did not respond to requests for comment; others offered only broad descriptions of the issues discussed.

The Oct. 25 huddle was a “meeting among environmental leaders and senior White House staff to exchange ideas about how best to address the climate crisis,” said NRDC spokesperson Kate Kiely.

Laura Kate Bender of the American Lung Association said her group doesn’t generally comment on the content of meetings but said that “the Lung Association advocates for measures to reduce air pollution and combat climate change because of their public health and environmental justice benefits.”

Covid-19 tests were required and provided to participants ahead of the meeting, Bender said, and everyone was provided with and wore N-95 masks.

Podesta, the founder of the Center for American Progress, is among the people whose names have been floated as a possible replacement for McCarthy when she’s expected to step down in the coming weeks. McCarthy’s deputy Zaidi is widely viewed as the leading contender to take the climate adviser position after she leaves (Greenwire, May 15).

McCarthy was listed as the host for only nine meetings with outside visitors during her first year in office, the records show. That does not include meetings among White House staff, virtual meetings and meetings that she may have attended but was not the point of contact on the visitor logs.

“Gina, Ali and our staff have taken many in-person and virtual meetings since the beginning of the administration,” said the White House spokesperson. “The administration has prioritized engagement and meetings across an entire range of climate stakeholders.”

Zaidi was listed as the host of only three in-person White House meetings during the first year of the Biden administration; Council on Environmental Quality Chair Brenda Mallory held five, the logs show.

Back in July 2021, McCarthy met with Hyundai Motor Group Chair Euisun Chung and other representatives from the automaker. Transportation Secretary Pete Buttigieg also attended that meeting, according to the White House, where participants discussed Hyundai’s plans for U.S. manufacturing. The automaker on Friday announced plans to build a new electric vehicle plant in Georgia, which the White House said came “as a result of some of our engagement with them on EVs.”

Hyundai at the time was lobbying the government on issues including electric vehicle infrastructure, hydrogen and fuel cell policy, and the Biden administration’s goals for zero-emission vehicles, according to a disclosure filed last year.

Google is one of the world’s largest operators of data centers and has committed to run all of those centers and its campuses on carbon-free energy by 2030.

The White House meeting came weeks after CEO Sundar Pichai announced a new suite of actions aimed at helping individuals to increase their own sustainability, like showing the least carbon-intensive driving directions and optimizing thermostats to make the best use of renewable energy.

Google and the White House did not respond to requests for comment about that meeting.

Zaidi, who could soon take over the climate adviser job, met last year with officials from Dow Inc. and NextEra Energy Inc.

NextEra Executive Chair James Robo and the company’s head of federal government affairs, Philip Musser, met with Zaidi on Oct. 28. The Florida-based energy company owns the electric utility Florida Power & Light Co., as well as other utilities and electric generating companies. Last fall, NextEra was lobbying the federal government on issues including renewable energy, transmission and energy storage, according to the company’s lobbying disclosure from that period.

The Dow and NextEra meetings were about “legislation and clean energy policy,” the White House spokesperson said. McCarthy attended both of those meetings as well.

In January of this year, Zaidi and the White House climate policy office chief of staff Maggie Thomas met with AmeriCorps officials “regarding Civilian Climate Corps,” according to the White House. AmeriCorps CEO Michael Smith and Yasmeen Shaheen-McConnell, the agency’s senior adviser for strategic partnerships, met with Biden climate officials as the administration was pushing for billions of dollars to fund a fleet of government-funded jobs to combat climate change. Congress later agreed to spend far less than that — about $20 million — to get the program off the ground (E&E Daily, March 10).

EPA Administrator Michael Regan made some visits to the White House and occasionally brought family members.

He brought his wife and son on Dec. 20, at Biden’s invitation, the logs show. Regan’s calendar, previously obtained under the Freedom of Information Act, shows a “Cabinet Holiday Tour” at the White House that evening.

Regan also visited with his wife, son and parents on March 17, the day he was ceremonially sworn into office by Vice President Kamala Harris. He had lunch at the White House with chief of staff Ron Klain and Commerce Secretary Gina Raimondo earlier in the day, Regan’s calendar shows.

He dropped in Feb. 4 as well, the day after his confirmation hearing before the Senate Environment and Public Works Committee.

Republicans have criticized McCarthy for meeting with an NRDC leader during the meeting of environmentalists. GOP lawmakers contend that the meeting appeared to be a violation of the Biden ethics pledge signed by McCarthy, who led NRDC before she took the White House job.

Top Republicans on the House Oversight and Reform Committee sent McCarthy a letter in April asking for all of her communications with NRDC since she took office. “Meeting with your former employer raises concerns that senior level Administration officials are not taking their ethical obligations seriously,” wrote Reps. James Comer (R-Ky.) and Ralph Norman (R-S.C.).

Asked about the visitor log entries, the White House again argued that McCarthy’s attendance at the meeting is allowable under the ethics pledge, citing the exception for “a matter of general applicability and participation in the meeting or other event is open to all interested parties.” Even though the meeting was not open to all potential attendees, the Office of Government Ethics has interpreted that provision to apply to meetings with a “multiplicity of parties,” which was the case here, the spokesperson said.

House Republicans asked McCarthy to send over documents including her calendar entries and communications with NRDC by May 12, but they hadn’t received a response as of May 20, said Jessica Collins, the committee’s GOP communications director.

“There is an overall lack of transparency at the Biden Administration so it’s no surprise the White House hasn’t responded to our request for information about Gina McCarthy’s meeting with her former employer that pushes for radical Green New Deal policies,” Comer said in a statement. “President Biden pledged to the American people that he would hold his administration to high ethical standards yet he refuses to comply with congressional oversight of possible ethics violations.”

Comer, the top Republican on the Oversight Committee, could become its chair next year if the GOP wins control of the House. Holding the gavel would give him more power to investigate the Biden administration and compel documents from White House officials.

Kathleen Sgamma, president of the Western Energy Alliance, was also critical of the White House aides’ meetings. Her oil and natural gas group didn’t request any meetings, but she sees the disclosures as a sign of where Biden’s priorities are.

Government transparency advocates have welcomed Biden’s release of visitors logs, particularly after the Trump administration largely refused to do so. The Trump White House eventually released visitor logs to some White House offices — including the Council on Environmental Quality — to settle a lawsuit.

But the White House visitor logs have long been seen as an incomplete view of who’s influencing top officials. And with many of the White House’s meetings conducted virtually during the pandemic, the logs detailing in-person visits don’t offer a full picture of who’s meeting with Biden’s climate aides. The White House has no plans to release virtual meeting logs, according to a spokesperson.

Without Zoom logs, the White House visitor logs end up losing most of their significance, said Jeff Hauser of the Revolving Door Project, a government ethics watchdog group.

Still, the in-person meeting logs “can be significant to show who is important enough to be paraded around,” he said. “Figuring out who gets that kind of right can be useful.”