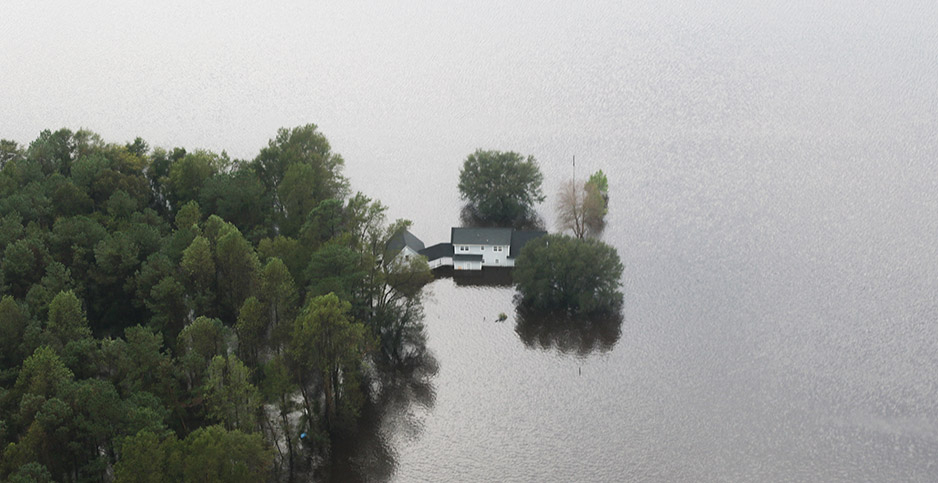 Government buyouts of flood-damaged homes disproportionately benefit whiter, wealthier communities, even as low-income and minority homeowners are more likely to participate in such programs, according to new research from Rice University.

In a nationwide analysis of the Federal Emergency Management Agency’s Hazard Mitigation Grant Program, researchers found that buyout programs both create and reflect historical discriminatory practices, even if the implementing agencies comply with anti-discrimination laws.

The phenomenon is especially prevalent in urban areas and is an unintended outcome of other discriminatory housing practices like mortgage redlining and renter refusal based on race or other factors, the researchers found.

"Basically, our analysis tries to follow the demographic trail," said Jim Elliott, professor and chair of sociology at Rice and a fellow at the university’s Kinder Institute for Urban Research. "What we found is [buyouts are] not randomly distributed among neighborhoods and racial groups. Buyouts are about housing, and housing is a socialized asset" affected by race and other socioeconomic factors.

"Cities have neighborhoods forged through long histories of racial segregation that live on to create unequal access to opportunities in good times and bad, as well as in ways that can accumulate across multiple of steps of housing transactions, even when the buyer is a government agency," according to the study published in the sociology journal Socius.

"Although sometimes blurry in practice and opaque in process, these steps matter because they allow racial inequities to enter at multiple points that can accumulate in unintended ways."

In an emailed response, FEMA said it does not discriminate in the distribution of disaster aid or grants based on race, economic or other demographic criteria, and to "imply that FEMA does not or would not grant assistance to any survivor in need is grossly inaccurate, misleading and disturbing."

Even so, American urban areas "have become ground zero for one of the federal government’s leading climate adaptation programs," Elliott said. And as home buyouts increasingly are used to help communities adapt to climate change, examination of the programs’ inherent biases is essential, he added.

The Rice research builds upon earlier work at the Houston-based university as well as other studies into racial and socioeconomic factors undergirding FEMA buyouts. Another recent paper exploring similar questions was led by Katharine Mach at the University of Miami (Climatewire, Oct. 10, 2019).

A study released last month by researchers in Virginia and Oregon showed the legacy of redlining practices is a significant factor in the way urban populations experience climate change (Climatewire, Jan. 21).

Anna Weber, a senior policy analyst for NRDC and co-author of that organization’s 2019 buyout study, said these programs are "operating in a context that is inherently inequitable" given the long history of housing discrimination. Weber added that the Rice study contributes to knowledge of "not just who is affected by the impacts of climate change, but how our actions to address those impacts can disproportionally benefit certain groups."

The Rice researchers said their study is "the first nationwide, peer-reviewed analysis of racial inequalities in the implementation of [FEMA’s] flood buyout program with data collected from 500 U.S. municipalities between 1990 and 2015."

Among other things, the researchers explore how racial composition of counties predicts buyout program participation, flood damage, population and income. It applies similar metrics using the racial composition of census tracts and neighborhood-level participation, and the net number and average value of housing units. The study then tallies how many buyouts occur at the household level within the participating tracts.

Factoring for those conditions, the researchers concluded that "the federal buyout program disproportionately targets whiter counties and neighborhoods," especially in urban areas where the adaptation approach is most widely used.

"White racial privilege can come to operate in different ways at different scales," the paper states, "effectively increasing access to government buyout assistance but simultaneously suppressing its acceptance by homeowners in all but the extreme case of community organizing."

"This dynamic is not a contradiction," said Kevin Loughran, co-author of the study and a postdoctoral fellow at Rice. "It is how privilege works in the age of climate change. It brings more options and public resources to those living in more socially advantaged spaces, especially if they own property, while leaving those in socially marginalized spaces more reliant on government assistance that is not only less likely to come but less trusted when it does."

One exception to the general findings involved home buyouts in New York and New Jersey after 2012’s Superstorm Sandy, when the government funded roughly 1,400 home buyouts. Some of those buyouts were funded by the Department of Housing and Urban Development and were not included in the Rice study.

Like the Mach-led study, the Rice analysis is based on more than 40,000 FEMA-backed buyouts of residential properties from 1990 to 2015. The authors also noted that FEMA is just one of several agencies that provides funding for property buyouts; others include HUD and the Small Business Administration.

One of the largest buyout programs in U.S. history is in Harris County, Texas, where more than 1,100 homes are expected to be purchased with federal funding after 2017’s Hurricane Harvey destroyed or damaged thousands of homes across Houston and surrounding Harris County.

Rob Lazaro, a spokesman for the Harris County Flood Control District, said the post-Harvey buyout program involves a wide cross-section of the metropolitan area, but he acknowledged that FEMA’s decisions about mitigation funding include a benefit-cost analysis that could steer buyout dollars to more affluent areas.

Harris County officials have adopted rules to ensure that neighborhoods targeted for buyouts are representative of the county at large and not predominantly affluent areas in suburban Houston.

"Harris County’s main prioritization factor is the flood reduction benefit, but we also take into account ‘social vulnerability’ as a factor of where we select project areas," Lazaro said in an email.