Whitehouse’s floor soliloquies chug on. Is anyone listening? 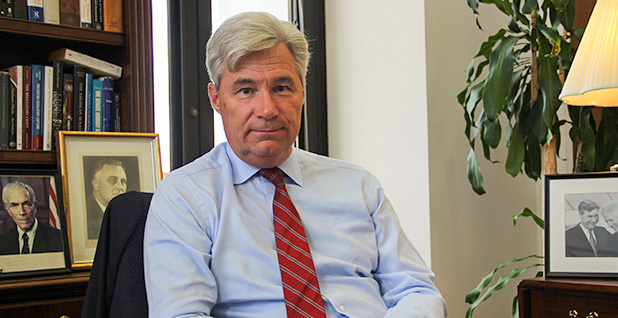 "I don’t know," the Democrat recently told E&E News during a sit-down in his office. "After all that effort, I certainly hope and pray it had an impact."

In the wake of unprecedented extreme weather events such as Hurricanes Harvey, Irma, Jose and Maria, the subject of climate change is back in the spotlight. And the administration’s move to kill the Clean Power Plan gives lawmakers more room to act.

"Remember Will Rogers? The 1930s-era comedian who said, ‘I’m not a member of any organized political party, I’m a Democrat,’" he said. "No, we’ve done an absolutely crap job of fighting this fight. We allowed it to become polar bears versus jobs, which is ridiculous on both sides."

There are more jobs in green energy and renewables now than in the fossil fuel industry, he said. "And it’s not polar bears that are suffering, it’s beaches and fishermen and farmers right here in the United States."

‘Capitalism is the solution’

"In this case, we spin this out too far; while we’re waiting for that natural eventual precipitous market collapse [of the fossil fuel industry] to take place, we’re also doing all this other damage that will then come back to haunt us, and for which there will be considerable blame," he said.

This idea runs counter to Whitehouse’s position. He argues market capitalism is not inherently problematic, but rather has been "torqued and polluted and ruined" by the fossil fuel industry.

"The markets work, but when you have negative externalities not in the price, that’s an economic failure, an economic dislocation," Whitehouse said. "But because it’s so to the benefit of the fossil fuel industry, they’ve stepped over into the political side and have just beat the hell out of everybody in order to protect that massive subsidy."

"You can’t smoke in airplanes any longer because now we know what secondhand smoke does to children sitting next to you in the airplane," he said. "They won’t let us do the equivalent of that for climate change because they make too much money off of the status quo."

"I spent my life as the son and grandson of Foreign Service officers, and we were not on the champagne and cocktails diplomatic circuit," he said. "We were in poverty-ridden countries, and we were in countries at war, and what I grew up around were Americans who put themselves and their families in harm’s way because they believed in something."

"And I thought, OK, this is a scientific problem, but government is working on this, we’re doing our job," he said. "Then comes 2010, Citizens United decision. Requested and forecasted by the fossil fuel industry from the five Republicans on the Supreme Court and boom, like sprinters at the starting gun, they were off."

‘Science got me scared’

When a carbon cap-and-trade bill passed the House in 2009 but failed to gain traction in the Democrat-controlled Senate, Whitehouse was furious and began taking on the Senate floor to vent his frustrations with Congress’ lack of action.

"So at that point, I thought, well, somebody has got to say something, just to let people know that the lights have not gone out here. The only way to do that around here with people as busy as they are is to put yourself on a schedule and tell your office every week, no excuses, no exceptions, I’m going to the floor."

And despite the yearslong quest, Whitehouse is convinced the climate change fight can be won. "I wouldn’t rule out a carbon fee," he said. A confluence of action has given him hope.

In addition to Graham’s announcement, large oil and gas players have said they support a carbon fee.

"Although they’re lying, Exxon, Shell, Chevron, all the big oil companies, pretend to support carbon fee," he said. "So there’s significance in their pretense, if they know they’ve got to at least pretend."

"Ultimately, we win. We just hope that we don’t win too late."