Why the environment wasn’t a factor in the presidential race 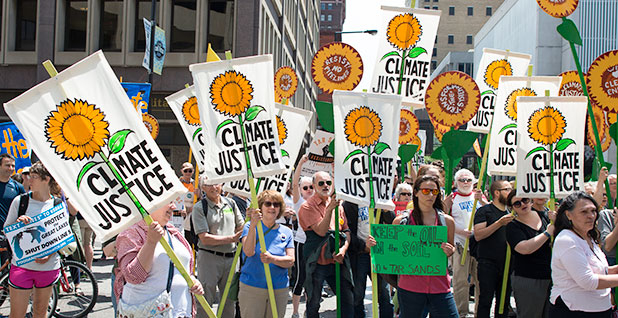 The 2016 presidential race has reopened the debate over how much environmental issues matter to voters. Photo by Fibonacci Blue, courtesy of Flickr.

This year’s presidential race promised to at least focus on part on those issues.

President Obama has been the most active president on environmental matters since Jimmy Carter, signing the Paris climate agreement and finalizing his Clean Power Plan and myriad other regulations aimed at cleaning up air and water.

After a bruising Democratic primary with Vermont Sen. Bernie Sanders (I) in which he repeatedly raised environmental issues on the stump, Secretary of State Hillary Clinton vowed to carry on Obama’s work and held a campaign event with climate champion and former Vice President Al Gore.

That presented a stark contrast with Trump, who denied the existence of climate change, promised to undo Obama’s work, campaigned in coal country and discussed dismantling U.S. EPA.

But Trump’s narrow Electoral College victory, as well as exit polling, suggest climate change and the environment played virtually no role in the presidential contest.

"Climate change didn’t factor into the decisionmaking in 2016. It wasn’t a deciding factor," said former South Carolina Rep. Bob Inglis (R), who promotes a market-based response to climate change at the Energy and Enterprise Initiative at George Mason University.

"I’m not even sure it’s on the minds of many people," he said. "It was not what voters were thinking about when they were voting."

And despite the millions of dollars that environmental groups pour into elections, there is some disagreement about whether — and when — it ever will be.

"Climate change has played almost no role in any presidential election. Period," said Anthony Leiserowitz, director of the Yale Program on Climate Change Communication. "It really has been deafening silence."

Paul Bledsoe, a former climate aide in the Clinton White House, said climate change and the environment were drowned out by the more spectacular developments in the race — from video of Trump discussing sexual assault to the steady drip of WikiLeaks’ internal Clinton emails and FBI Director James Comey’s surprise decision to reopen the investigation into the Democrat’s personal email server.

"It was such an outlandish campaign, you could argue that no substantive issue had any role in determining the outcome," Bledsoe said.

Exit polling on Election Day found a majority, 52 percent, said the economy was the most important issue facing the country. Terrorism came in second at 18 percent. Edison Research, which conducted the large survey, confirmed that neither the environment nor climate change was included as an option in the poll.

Inglis said the environmental issues were swept into Trump’s message of free-enterprise solutions instead of government or regulatory ones.

"Climate fits there," he said. "It’s sold by all the environmental groups that we have to set a limit and regulate to that limit [of carbon emissions]. I think you can find some repudiation for that kind of solution in the election results."

Other political analysts noted the issues emphasized by presidential campaigns are based on extensive focus groups and polling. While Trump’s campaign may have been untraditional in that regard, Clinton’s stump speech was likely heavily influenced by what the campaign viewed as the most resonant issues with voters. Climate change, it appeared, did not make the cut.

"I don’t believe in accidents in well-organized campaigns," said Nathan Gonzales of The Rothenberg & Gonzales Political Report. "If the Clinton campaign saw environmental issues as a key to boosting her prospects, she would have talked about it more, or it would have been more present."

Evolving into an economic issue

There are data to suggest climate change and the environment are motivating issues for some voters, but it’s still unclear how large that section of the electorate is.

Climate change and issues like hydraulic fracturing for natural gas were repeatedly highlighted by Sanders in the Democratic primary.

Leiserowitz of Yale said his research has found that, unsurprisingly, there is a partisan gap on the issues. But what was surprising, he said, is how large that divide is.

His team asked voters to rank 23 issues by importance. Among liberal Democrats, protecting the environment is No. 4, climate change is No. 6 and clean energy is No. 8.

Among Republicans, however, those issues drop to the very bottom of the list, with climate change falling to dead last.

"It’s one of the most polarized issues in America," he said.

But other research suggests climate change may be more important to voters than most polling suggests.

Jon Krosnick and others at Stanford University have found that when voters are asked what is the most important problem facing the country today, climate change typically registers very low, around 1 percent.

But if respondents were asked what is the most serious problem facing the country or the world in the future if nothing is done to stop it, global warming quickly rises to around a quarter of respondents — a plurality in their survey.

And many argue that climate change will figure more heavily on voters’ minds as its effects like sea-level rise and severe storms have a more direct impact on the electorate.

"In particular, as the renewables and other advanced energy sectors become larger and larger, it will be a straight economic issue," Bledsoe added.

Indeed, a report this month from the Office of Management and Budget concluded that budgeting for four areas affected by climate change — crop insurance, health care due to declining air quality, wildfire suppression and coastal disaster relief — will have to significantly increase by the end of the century.

The report estimated that total expenditures on those could rise to between $34 billion and $112 billion, the equivalent of between $9 billion and $28 billion in today’s dollars. That could represent up to 15 percent of total federal discretionary spending.

Environmental groups that spent millions of dollars this year point to polls that they say show wide consensus among voters in support of their positions.

For example, the League of Conservation Voters and Sierra Club released a poll yesterday on the Nevada Senate race between Republican Rep. Joe Heck and Sen.-elect Catherine Cortez Masto (D). It found that 6 in 10 voters support Nevada’s large solar industry and that Heck’s opposition to it — combined with his support for oil development — hurt him (E&ENews PM, Nov. 21).

More than half of respondents in the Global Strategy Group poll of 800 voters conducted after the election recalled seeing ads from the environmental groups criticizing Heck. More than 60 percent of swing voters, moreover, said the criticism was a convincing reason to vote against Heck, and the environmental groups suggested it may have been enough to swing the election to Masto, who won by less than 3 percentage points.

But others cautioned that doesn’t mean those issues, or the environmental groups’ ads, are what motivated voters to vote — or who they voted for.

Krosnick of Stanford, who has extensively studied climate change attitudes in the electorate, said environmental groups’ efforts are misguided.

He said it is "hopeless to try to discern anything from the election on climate change — or any issue."

A more accurate way to analyze the issue is to look at the climate change "issue public," Krosnick said. This is the group of voters who are passionate about global warming. Krosnick described them as being "married" to it. They are likely to lobby their members of Congress, donate to environmental groups and volunteer for campaigns.

The bad news for green groups is that "issue public" is 13 to 15 percent of the electorate. And, if history is any guide, issue publics don’t change for long periods of time.

Even the more direct climate impacts mentioned in the OMB report are "symbolic" compared with the types of events that otherwise cause jumps in an issue public’s size.

"That argument is just not the same thing as ‘This gun control law allowed a guy to buy his gun and kill your sister,’" Krosnick said as an example. "That’s a kind of connection that we’re just never going to see for climate change."

The good news for green groups, Krosnick said, is that a strong majority of the country — 75 to 80 percent — already agrees that climate change is real.

But because of that, environmental groups spending money to educate and persuade voters to make climate change a higher priority is likely hopeless.

"That is wasted money," he said. "Trying to convince people to attach more importance to the issue is an uphill battle."

Instead, Krosnick said, environmental groups should spend their money making sure every member of the issue public turns out to vote.

"I talk to voters and see what motivates them," said Khalid Pitts, the Sierra Club’s national political director. "Whether you are a hardcore climate person or someone who just cared about the environment in general, those people come out" to vote.

There is one aspect of Krosnick’s research that he and Pitts agree on, though.

Krosnick said the best way to activate an issue public is to threaten them. Trump’s presidency will almost certainly accomplish that.

"The climate change issue public," Krosnick said, "has never been more threatened than they are right now."