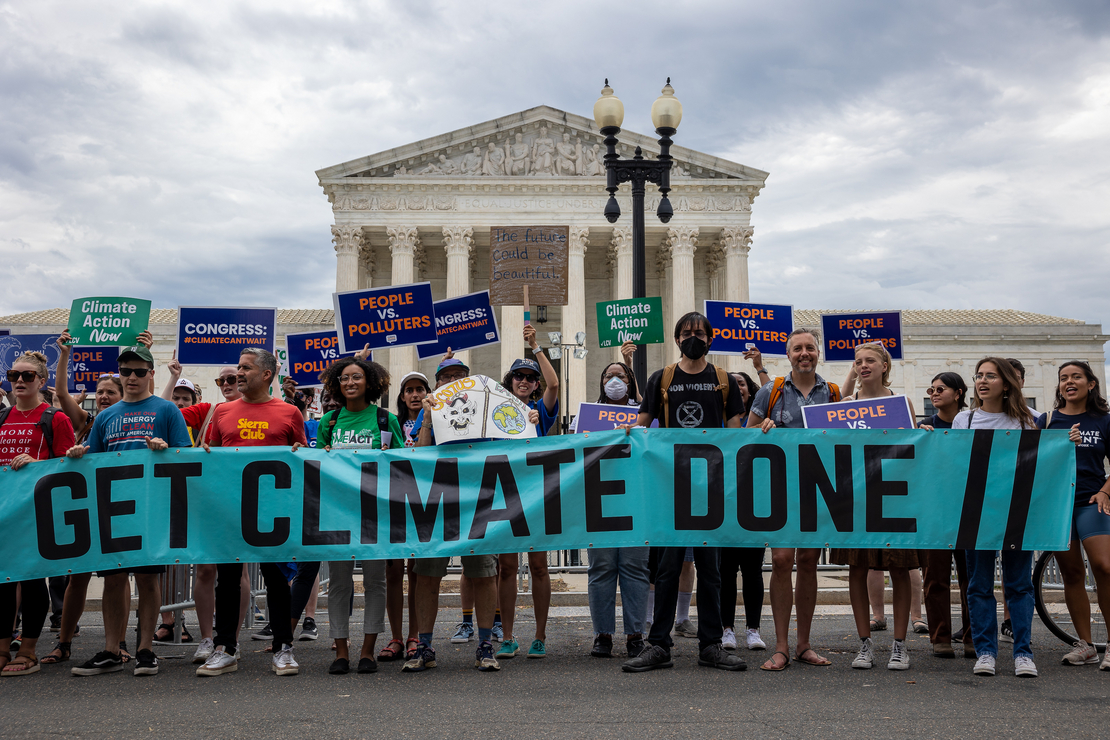 The Supreme Court’s EPA ruling last week is casting a shadow over a climate rule proposed by an entirely different regulator: the Securities and Exchange Commission.

The SEC unveiled a proposal in March that would require companies to provide investors with reliable information about their contributions to climate change and the risks they face from a warmer planet. Since its release, the draft rule has drawn opposition from both Republican officials and business groups, who say the SEC — an independent financial agency — is overstepping its bounds.

Now, many of these same critics say the Supreme Court decision in the West Virginia v. EPA case gives them more ammunition to attack the SEC climate proposal.

In their 6-3 ruling, the high court’s conservatives agreed to limit EPA’s ability to regulate greenhouse gas emissions from power plants. They did so by holding up the “major questions” doctrine, a legal theory that says Congress must give agencies an explicit green light when regulating issues of “vast economic and political significance” (Greenwire, June 30).

Opponents say this argument could apply to the SEC climate proposal because the agency’s sweeping mandate, which was penned nearly a century ago, makes no mention of climate change. Other rules affecting car emissions and pipeline approvals could also be threatened (see related story).

The agency’s climate disclosure push is “completely divorced from financially material information that has historically been the guide for what has to be disclosed, and with no authority from Congress to do that,” said Sen. Pat Toomey (R-Pa.) in an interview on Bloomberg TV following the ruling.

Legal experts and attorneys admit the high court decision complicates things. But they aren’t necessarily convinced the West Virginia v. EPA ruling itself is what ultimately would doom the SEC rule — at least not yet.

Though the Supreme Court made clear that it is closely examining agencies’ regulatory authority, it did not clarify what types of cases would fall into the major questions category moving forward.

In addition, there are fundamental differences between the climate rule at the heart of the EPA case and the climate disclosure proposal put forward by the SEC. Observers say the distinction makes it difficult to predict how the court would apply the major questions doctrine to SEC mandated climate disclosure.

“They’re not saying that just because a regulation is big means it’s going to be found to be unlawful. And so with regard to any other rules, I think it’s really tough to say how this will be applied. Because the court did not provide a road map either for EPA or for any other agency in determining what a major question is,” said Elizabeth Dawson, a counsel in the environmental and natural resources group at Crowell & Moring LLP.

At the very least, Dawson added, the ruling “could delay the finalization of the rule if the commission determines that it has to provide more support for the rule than it originally thought it might have to.”

At the center of the West Virginia v. EPA case was the Obama administration’s Clean Power Plan. The regulation, which never was implemented, sought to slash emissions by pushing power plants to move away from coal-fired power. The court found that Congress, via the Clean Air Act, did not grant EPA the authority to craft such sweeping regulations.

The ruling led to immediate speculation about whether the court would apply the same line of thinking to the SEC’s climate disclosure rule.

That uncertainty only has intensified as Republican officials have seized upon the high court decision.

West Virginia Attorney General Patrick Morrisey, a Republican who led the case against EPA, argued in a press conference last week that the rule “would also fall into the major questions category where the Biden administration is trying to transform all these agencies, what their traditional mission is, and turn them into environmental regulators” (Climatewire, July 1).

Environmental law attorneys and some financial regulation experts say it’s not that simple. One reason is that while the West Virginia case involved EPA using a somewhat specific statutory authority to engage in this relatively novel type of regulatory effort, the SEC has rooted its proposal in its basic mission from Congress: providing investors with the information they need to make smart financial decisions.

Since it was established in 1934, the agency has used that power to mandate different types of information disclosures as the financial system and corporate world evolved.

A critical question moving forward then would be whether “the court is likely to view climate change information as the latest in a long line of types of information that the SEC has required companies to disclose, or whether it’s likely to view it as of such a transformative nature that it exceeds the power delegated by Congress,” Ann Lipton, a professor of corporate governance at Tulane Law School, wrote in an email.

A growing number of investors, for their part, have in recent years demanded more and better information from companies about their efforts to prepare for global warming, which is why proponents of mandated climate disclosure say it’s necessary for the agency to step in.

“The investors themselves built up over the past decade this extremely robust voluntary climate risk disclosure reporting regime, basically because the SEC wasn’t doing it. And all this [SEC] rule is doing is making sure that data is not fraudulent. It’s mostly data that is already being reported and is already being relied upon,” said Madison Condon, an associate law professor at Boston University who studies the intersection of climate change, market risk and regulation.

For that reason, she added, “in a land where the court wasn’t completely captured by political bias, this rule is very clearly in the interest of investor protection.”

Todd Phillips, who directs financial regulation at the Center for American Progress, echoed that point. The SEC is not “trying to tackle climate change,” he said. “The SEC is trying to get investors information, like they’ve been doing since the 1930s.”

Others aren’t so sure. David Zaring, a professor of legal studies and business ethics at the University of Pennsylvania, acknowledged that the situations at EPA and the SEC are different due to the statutes and regulatory efforts at issue. But he also said last week’s ruling is important for the SEC because the court is clearly keeping an eye on agencies that are taking bold actions to address issues they might not have handled historically.

As he sees it, the agency’s climate disclosure proposal strays from the agency’s typical approach to its mandate, which could mean the agency may have a hard time making the case that the driving force behind the rule is investor — rather than environmental — protection.

“I don’t think it’s totally crazy to think that there’s a link between climate disclosures and investors,” Zaring said. ”I think it requires some squinting that I think a relatively conservative judiciary may not want to engage in.”

Motivations aside, there’s a growing sense the rule’s path to implementation is getting knottier by the day. One potential pitfall is the continued politicization of climate change.

“If there are some radical judges who take this opinion and willfully misinterpret what the statute says, and what the SEC says it’s doing, the SEC can’t do anything about that. That’s just judges playing politics,” said Phillips of CAP.

BU’s Condon said she’s confident the rule would run aground — whether it’s struck down due to the major questions doctrine or other legal challenges.

“I think the Supreme Court is going to kill the rule,” she said. “I think they could do it in many ways, and it may or may not be the major question doctrine.”