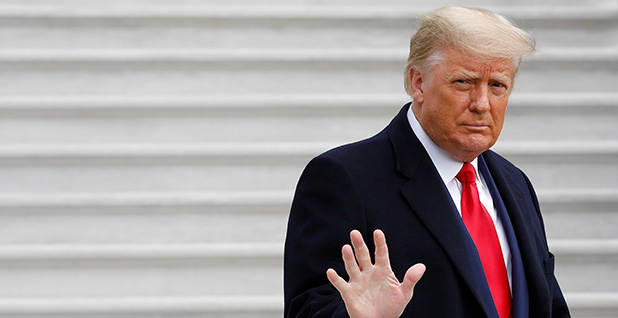 President Trump's demotion of a top regulator is firing debate about whether the Federal Energy Regulatory Commission has become more political. Polaris/Newscom

President Trump’s demotion last month of Neil Chatterjee, the former chairman of the Federal Energy Regulatory Commission, is raising a key question: Has the agency been politicized?

Chatterjee’s unseating was viewed by many as a retribution for his comments supportive of climate action and his refusal to go along with the Trump administration’s governmentwide ban on diversity training events.

Such an act by a sitting president against the head of an independent agency is rare, if not unprecedented, observers said.

"I have never seen a chairman removed before by the president," said Jon Wellinghoff, a former commissioner who was appointed in 2006 by President George W. Bush and served as chairman from 2009 to 2013 under President Obama.

The president’s decision to replace Chatterjee as chairman may be more a reflection on Trump than a fundamental change. "This is not a blow to the integrity of the commission; it’s a continuation of the Trump administration," said Suedeen Kelly, who served three terms as a FERC commissioner under Bush and Obama. The Trump administration has declined comment on the reason for the demotion.

Still, the move is spurring debate on whether additional measures are needed at FERC to safeguard against a given administration’s political whims. Some independent agencies, like the Federal Reserve, are set up such that a president is prohibited from removing a chairman. To replicate that model at FERC would require congressional action, according to Wellinghoff.

"That would, in fact, increase the independence of the agency, [because] the chairmen of these agencies do have a tremendous amount of power," he said.

Independent agencies are considered part of the executive branch and possess rulemaking authority, but they operate outside Cabinet-controlled executive departments. Such agencies, established and defined by Congress, are intended to operate free from presidential control. For example, the president cannot remove most members of independent agencies, and they are not required to comply with presidential executive orders.

Under FERC’s statutory parameters, the president is entitled to name a new chairman at any time. When asked whether the president’s decision was an example of political tampering, FERC spokesperson Mary O’Driscoll cited federal regulations, which clarify that the commission shall be composed of five presidentially appointed members "by and with the advice and consent of the Senate" and that one member of the commission "shall be designated by the president as chairman."

While Wellinghoff agreed that the move was within legal bounds, he said it was untraditional to remove a chairman so late in the game. "We haven’t seen any custom and culture preserved in this administration," he said.

Customarily, a president uses this power at the start of his term to install a leader from his own party.

President-elect Joe Biden, for example, is expected to tap Democrat Richard Glick to take over the head post once he is inaugurated. Biden could also choose incoming Commissioner Allison Clements, who was confirmed along with Republican Mark Christie by the Senate this month (Energywire, Dec. 1).

When Trump took office in 2017, he transferred the chairmanship from Democrat Norman Bay to Democrat Cheryl LaFleur, as there were no sitting Republicans at that time.

Last month, Trump replaced Chatterjee with another Republican commissioner, James Danly, who is expected to serve as chairman until Biden’s inauguration. Chatterjee has said he intends to finish out his term, which expires next June (Energywire, Nov. 20). He also served as chairman of the agency in 2017, from August through the beginning of December.

Tony Clark, a former Republican commissioner appointed by Obama in 2012, said the president’s ability to demote a FERC chairman does not politically compromise the agency.

"At the end of the day, it doesn’t change who is sitting there, so the impact is limited, to a degree," he said.

Clark said the perception that FERC has become more political may have more to do with the evolving political nature of climate change than with the agency itself.

In the United States, how to address the threat of global warming often falls along political lines.

"It used to be a pretty straightforward equation of keeping the lights on and allocating costs appropriately," he said. "The agency is more visible now because energy politics are more visible than they were 10 to 15 years ago."

While President Trump removed Chatterjee as chairman, he did not fire the commissioner from the panel, meaning the move was within the technical legal limit.

"Chatterjee was removed from being chair, but the chair position doesn’t have statutory protection," said Cary Coglianese, director of the Penn Program on Regulation. "The president can select who chairs the commission, but it doesn’t set a limitation on the president’s ability to remove a person from the chair position."

This discrepancy between FERC and other agencies stems from there being no one legal or technical definition for what constitutes an independent agency. The only attempt at a definition is found in the Paperwork Reduction Act of 1995, which simply lists 16 independent agencies — and each is governed by a distinct set of statutory rules and therefore operates somewhat differently from the others.

There are, however, two defining characteristics for most independent agencies, Coglianese said. They are multi-member bodies, or commissions, and the head of the agency cannot be fired at will by the president without proper cause.

"Otherwise, the president can wake up one morning and decide he doesn’t like the head of an agency and fire them," Coglianese said. "He doesn’t have to give any reason, or the reasons can be frivolous or based upon policy disagreements."

Clark said the one time he saw the president attempt to influence FERC was in 2018, when then-Energy Secretary Rick Perry submitted a proposal to the panel that would subsidize coal and nuclear power plants. But the commission promptly rejected the bid (Energywire, Jan. 9, 2018).

"I thought there might be some follow-up, and they did open a docket on trying to address resilience," Clark said. "But not a lot has happened with that docket."

Republican lawmakers and a coal trade group have recently urged the commission to pick up the resilience docket, but the panel has yet to take action (Energywire, Nov. 19).

"In my experience under Obama, there wasn’t a great deal of information flow between the administration proper and the agency," Clark said. "Now, individual commissioners or chairmen might have a general philosophy that lined up with an administration, so some of the themes might work their way in, but it’s much more nuanced and attenuated."

While independent agencies like FERC are designed to be somewhat insulated from changing political agendas, they are still led by political appointees, making a complete separation impossible. FERC has also faced increasing pressure from anti-pipeline activists and property rights advocates who have joined forces to oppose natural gas infrastructure. And presidents can move their agendas by being strategic in choosing a chairman. For example, George W. Bush, who nominated former Texas utility regulator Patrick Wood III to head the agency, wanted to pursue competitive wholesale electricity markets.

"In Texas, Pat Wood had restructured the electricity industry and set up a market. Bush was very clear about the fact that he nominated Pat as chair so he could pursue a policy of fair and efficient markets," Kelly said.

Marc Spitzer, a former Republican commissioner who served from 2006 to 2011, said the role of a FERC commissioner is not about avoiding politics or politicians altogether. It’s about striking the right balance, and lending insight and expertise when applicable.

"Coming to Washington, I wanted to cooperate with the House and the Senate and to an extent the White House, though it was less so," said Spitzer, who is now a partner at the law firm Steptoe & Johnson LLP. "I don’t treat politics as a dirty word; I welcomed the discourse."

"I’d walk down to the Senate [in Arizona] and talk to her, and she’d say, ‘What legislation would be good in terms of tax credits?’ or ‘What do you think about charging stations in garages?’" he recalled.

"When Gabby got elected to Congress, she was interested in solar energy for Arizona, so I viewed my job as assisting her in her task as being a legislator for my home state."

FERC prohibits commissioners and staff from discussing pending matters, but there is no such ban for settled cases or discussion of related technical issues. If a lawmaker or lobbyist calls to discuss a matter that FERC prohibits private communication about, commissioners are required to make note of the so-called ex parte interaction in the record.

"I never had that happen to me, but there were times when [former Chairman] Cheryl [LaFleur] would get calls, and she would file disclosure notices," Spitzer said.

While a president can be strategic in choosing a chairman, he cannot direct the specifics of policy implementation, and a chairman only has so much power, Kelly said.

"The only power you ultimately have is the power given to you by the statutes you are responsible for implementing, like the Natural Gas Act or Federal Power Act," she said. "So at FERC, your real boss is the Senate Energy and Natural Resources Committee."

For example, in setting up regional competitive markets in accordance with Bush’s desire, Wood wanted to establish a standard market design that would be used across the country, Kelly said.

"But there were two areas of the country that did not want markets," she said. "The Northwest and Southeast."

States like Oregon and Washington had access to abundant hydropower and believed they didn’t need a market because they had plenty of low-cost supply already. In the Southeast, states like Florida, Alabama and Georgia were already coordinating across borders and running their regional transmission operations, she said.

"The Northwest had mostly Democratic senators, and the Southeast had mostly Republican senators," Kelly said. "There were of the same mind on this issue, and through the Senate Energy Committee, FERC’s oversight leadership, they communicated to Chairman Pat Wood, ‘We don’t want you to implement this [standard market design] policy. Understanding how strongly the committee members felt, Chairman Wood did not implement it."

While Wood was able to establish a number of regional markets, he failed to implement a standard design across the country. In that instance, Kelly recalled, the president appointed Wood with a specific policy goal in mind, but the politics of the Senate, not the executive branch, forced the FERC chairman to change course.

"What FERC wanted to do is say, ‘You shall adopt this standard market design,’ which is when the Senate Energy Committee said ‘You shall not,’" she said. "Since then, there have only been a few occasions when FERC has promulgated rules requiring all [grid operators] to do something the same way."