Will Biden’s climate goals fail without an energy standard? 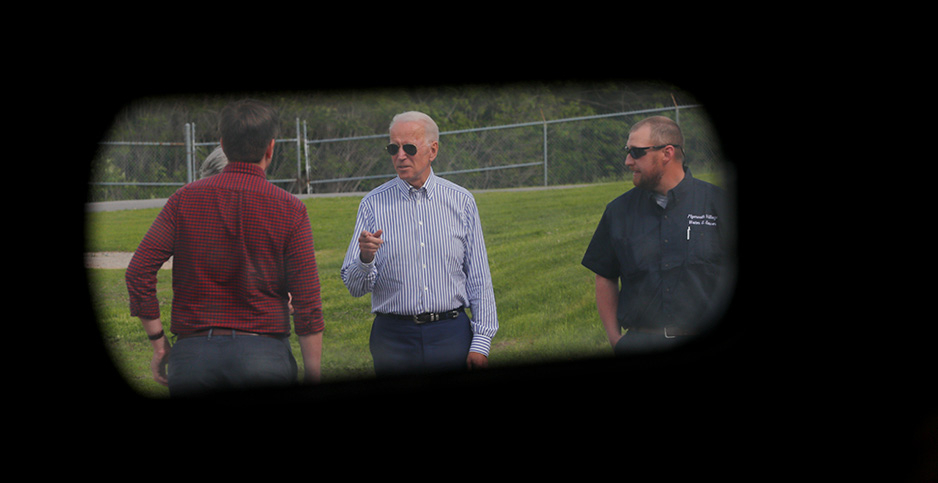 Joe Biden is seen through a garage door window as he tours the Plymouth Area Renewable Energy Initiative in New Hampshire in 2019. Biden promised to set the country on a path to net-zero emissions while campaigning for president. Brian Snyder/REUTERS/Newscom

When academics and energy modelers pencil out America’s pathway to net-zero emissions, nearly all of them agree on one thing. The United States will need to install vast quantities of clean electricity over the next nine years to eliminate greenhouse gas emissions by midcentury.

So when the bipartisan infrastructure package negotiated by President Biden and moderate senators emerged without a clean electricity standard last month, it raised one question above others in climate circles.

Will Biden be able to halve emissions by 2030 without it?

Many climate and energy analysts praised the infrastructure package as a critical piece of legislation, one that includes provisions that could facilitate the transition to cleaner forms of energy.

But the package itself is unlikely to deliver major emissions reductions, they said. And if Biden fails to pass a clean electricity standard in a second infrastructure package or another bill, his 2030 climate goals would be in jeopardy without an aggressive backup plan. That would likely rely on a wide variety of new rules and regulations.

"Getting to 50%-52% emission reduction is going to take pushing on all fronts, all the time, for the rest of the decade," said John Larsen, who tracks power-sector emissions for the Rhodium Group, a consulting firm. "The goal is that ambitious, and the goal is in line with science. It is just going to take pulling out all the stops."

The White House maintains that it’s committed to passing a clean electricity standard, which would set requirements that power be generated by carbon-free sources. The president has targeted 100% zero-emissions power by 2035, making it a central tenet of his pledge to reduce emissions 50% to 52% of 2005 levels by 2030.

"I want to set the clean electricity standard that moves us to a fully clean and reliable grid," Biden said during a speech in Illinois last week.

Exactly how he would do that is unclear.

Democrats cling to a 50-50 majority in the Senate, with Vice President Kamala Harris serving as a tiebreaking vote. Even if they vote in a unified bloc, it is uncertain whether a clean electricity standard qualifies for budget reconciliation, the parliamentary procedure that allows legislation to pass with a simple majority instead of 60 votes.

The bipartisan infrastructure package, by contrast, has the support of moderates in both parties, but its emissions impacts are uncertain. Details of the deal remain opaque. It would earmark $73 billion for power-sector investments, though how that would be spent is not entirely clear, and it would create a federal authority to accelerate the permitting of transmission projects.

Manchin’s proposals are likely to achieve emissions reductions similar to those associated with the energy bill passed at the end of last year, Larsen said. That law phases out the use of hydrofluorocarbons and extends tax credits for carbon capture projects. A Rhodium Group analysis found that it would reduce emissions by up to 100 million tons annually, or roughly 2% of total U.S. emissions.

"My personal opinion is that it would be extremely hard to cut carbon emissions 52% economywide without passing a legislative package this summer. We need to have significant federal investments to tackle the climate challenge," said Leah Stokes, a professor who studies climate policy at the University of California, Santa Barbara, and is an outspoken proponent of a clean electricity standard.

She called the infrastructure package a good bill, with important investments in public drinking water systems, transit, roads and bridges.

"There are critical things in there," she said. "It just is not a climate bill."

Power companies have signaled they are willing to support a clean electricity standard, with caveats. The first is that zero-carbon sources like hydro and nuclear must be included under the standard, not just solar and wind. The other is that a standard must provide some accommodation for natural gas plants, which the industry views as critical for ensuring reliable and affordable power.

The industry can likely reduce emissions 80% with existing technologies, said Emily Fisher, general counsel for the Edison Electric Institute, a trade group representing utilities. Beyond that, further innovation is needed to ensure the reliability of the grid.

"A CES is important because it might be able to accelerate our progress, but we’re going to need a range of tools to get all the way to zero," Fisher said.

The vast majority of net-zero studies and models foresee the electric sector playing a leading role in greening America. The reasons are several.

Renewable energy systems are mature relative to green technologies in other sectors. Where electric vehicles are just cracking the auto market and companies are rolling out pilot projects for green hydrogen in industrial settings, wind and solar generated 13% of America’s electricity last year. Coal, as a reference point, generated almost 20% of U.S. power, while gas provided 40%, according to BP PLC’s 2021 "Statistical Review of World Energy."

Clean electricity is also the building block for decarbonizing other sectors of the economy. Most plans for greening cars, factories and home heating systems call for ditching fossil fuels in favor of electricity.

That’s why net-zero studies, like one done by the National Academies of Sciences, Engineering and Medicine earlier this year, estimate that the U.S. needs 75% of its electricity to come from carbon-free sources by 2030 (Energywire, Feb. 3).

A separate report by researchers at Princeton University estimated that the U.S. needs to derive 70% to 85% of its power from carbon-free sources by 2030 to ensure net zero by 2050. They estimated that wind and solar generation needs to grow fourfold by 2030 to supply roughly half the country’s power.

Big emissions decreases from power plants are expected to be responsible for most of the carbon reductions over the next decade. A University of Maryland working paper concluded that the power sector would provide more than half of all emissions reductions needed to meet Biden’s 2030 goal.

And it’s possible to meet that promise without a clean electricity standard, analysts said. At least on paper.

Is a CES indispensible?

Regulatory reforms, largely in the form of emissions standards at EPA, could also help move the needle. Yet the regulatory alternatives face legal uncertainties — and time constraints. Proposals to limit carbon dioxide pollution from power plants by the Obama and Trump administrations both were turned back in court.

One alternative is gaining steam: a push to revamp the subsidies available to wind and solar. A research note released by the Rhodium Group last week estimated that overhauling renewable tax credits could reduce power-sector emissions 64% to 73% of 2005 levels by 2031.

"You can make a lot of progress now and buy time to make progress later. That’s important to know," Rhodium’s Larsen said.

But relying on tax incentives to do the emissions lifting is not a small job. Utility-scale solar is now only eligible for the investment tax credit, while onshore wind can only access the production tax credit. Rhodium reckons developers should be able to choose which subsidy works best for their projects.

Another change could make direct payments possible to developers that do not have tax liability and therefore have difficulty taking advantage of the investment tax credit.

A third idea would enable developers to recoup the maximum amount of subsidies available, instead of phasing them down over time.

"Those would be tools that would be really useful as we try to build as many renewables as possible this decade," said Fisher of the Edison Electric Institute.

More broadly, she said, it is emblematic of the type of approach that will be needed to drive down emissions at power plants.

"One of the things that has been most encouraging to me in the most recent discussions is that there is no one single bullet, and we are going to have to put together a whole series of policies to make this work," Fisher said. "We should get what we can from each policy, and different policies will help us address different parts of the problem."