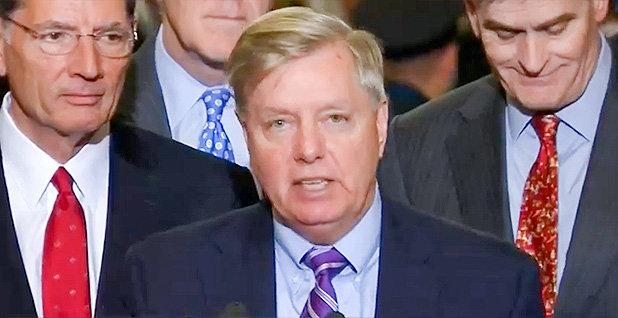 Republican Sen. Lindsey Graham of South Carolina has publicly endorsed a carbon tax, heightening the call for climate action and possibly laying the groundwork for a bipartisan push to address global warming.

"There seems to be a coalescence around the idea that a price on carbon is the best way to allow the U.S. and its capitalist economy to tackle the problem," said Tim Profeta, who served as environmental counsel to Sen. Joe Lieberman and was a principal architect of Lieberman and Arizona Republican Sen. John McCain’s "Climate Stewardship Act of 2003."

"Sen. Graham’s reinvocation of these concepts means that there may be some ability to have conversations again about the bipartisan solution to climate change," he added.

Graham told a group of reporters yesterday at a climate change conference at Yale University that he is working with Sen. Sheldon Whitehouse (D-R.I.) on bipartisan legislation to price carbon (Climatewire, Sept. 20).

"I’m a Republican. I believe that the greenhouse gas effect is real, that CO2 emissions generated by man is creating our greenhouse gas effect that traps heat, and the planet is warming," he said. "I’m looking for a solution that is pro-business, and we need to get to the bottom of the problem.

Whitehouse and Sen. Brian Schatz (D-Hawaii) introduced legislation in July at the American Enterprise Institute to instate a carbon tax. They urged Republicans to support the measure but had yet to secure GOP backers (E&E News PM, July 26).

It’s unclear whether Graham is joining the Whitehouse-Schatz bill or will be working with Whitehouse on a separate measure. The senators’ offices could not be reached for comment in time for publication.

Jill Sigal, who served in the George W. Bush administration as assistant secretary of Energy for congressional and intergovernmental affairs, said there is a growing recognition in Congress that action is required to address a changing climate.

"You’ve got increasing numbers of the Climate Solution Caucus on the House side. … You had the vote in the House to keep the language in the National Defense Authorization Act, which the House has now taken a position through passing that legislation that climate change is a direct threat to national security," said Sigal, the current executive vice president of the Climate Leadership Council, which supports a carbon dividend accompanied by relaxed regulation.

"I’ve been in public policy a long time, and I never try to make predictions on how long it will take for a policy to gain strength. … We’re at the beginning of a process, but we are hopeful," Sigal said.

After three days of marathon debate on the floor this summer, the House passed its version of the NDAA that included an amendment from Rep. Jim Langevin (D-R.I.) to require each branch of the military to assess bases and installations that are most vulnerable to the effects of climate change.

A bloc of Republicans, many of whom are members of the bipartisan Climate Solutions Caucus, crossed the aisle to uphold the amendment. The group, which adds Republicans and Democrats in pairs, is nearing 60 members.

Profeta said the notion of a carbon tax is a "very Republican idea at its core" and could find its way into the upcoming tax overhaul, depending on where the revenue comes from. He also noted that while it’s impossible to predict how soon climate legislation could move, laying the groundwork is step one.

"Legislation on climate change is a very difficult lift and where we started this Congress was in a polarized position, which would have given nobody hope that climate change could move this Congress, and I think it’s still facing winds," he said. "But if you’re going to play the long game and develop an idea and build support, you need to bring it to the table.

"Whether the window opens in two months or two congresses, you need to have the idea developed," he said.