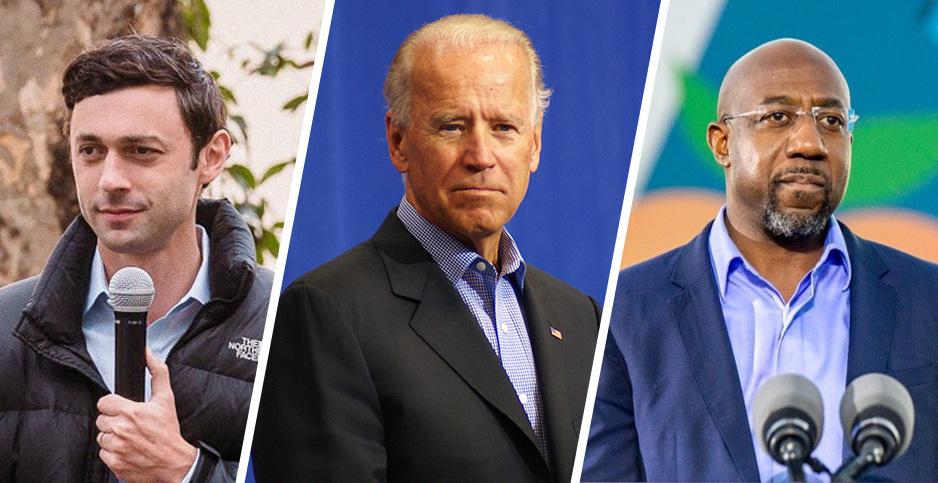 Democrat Jon Ossoff won his Georgia runoff against Republican David Perdue yesterday, per the Associated Press, joining Democrat Raphael Warnock to sweep the state and give Democrats a narrow, but pivotal, 51-50 edge in the Senate chamber. Vice President-elect Kamala Harris is set to hold the tiebreaking 51st vote.

"The Biden clean energy agenda just got a huge shot in the arm," said Paul Bledsoe, a former Senate Finance Committee staffer now with the Progressive Policy Institute. He noted Democrats will now control the calendar and committee chairmanships.

"The Democratic Senate can now pursue the broad, Biden clean energy economic jump-starting vision," Bledsoe said. "And that’s how it will happen, through economic policy."

The shocking, unprecedented assault on the U.S. Capitol yesterday by a pro-President Trump mob, which sent members of the House and Senate fleeing to safety as they gathered to certify the Electoral College results of the 2020 presidential election, shook political foundations, but the long-term effect is unclear.

The head of the National Association of Manufacturers, a group representing 14,000 companies, including Exxon Mobil Corp., yesterday called the breach of the Capitol "not the vision of America that manufacturers believe in" and called on Vice President Mike Pence to "seriously consider" invoking the 25th Amendment of the Constitution to remove Trump from office.

Biden has expressed optimism that Republicans will be more likely to work with him once Trump’s term ends. He scrapped planned remarks on the economy yesterday and addressed the melee at the Capitol, pledging that "the work of the moment and the work of the next four years must be the restoration of democracy and the recovery of respect for the rule of law, and the renewal of a politics that’s about solving problems — not stoking the flames of hate and chaos."

Bledsoe said he expects Biden and Democrats to begin with efforts that have Republican support — wrapping green energy initiatives in stimulus legislation to help the country recover from the coronavirus pandemic, and in an infrastructure package.

"The priority now is get the country moving again through stimulus and infrastructure, including green energy policy," he said.

Yet the prospect of a narrow Senate majority could make it difficult for Biden to reach his goal of a zero-carbon U.S. power grid by 2035.

Some Democrats have pushed to eliminate the Senate filibuster, which requires 60 votes for passage, so that party priorities could pass with a simple majority.

But Sen. Joe Manchin (D-W.Va.), who is likely to chair the Energy and Natural Resources Committee, has rejected calls to eliminate the filibuster.

Still, Democrats could elect to try some tax provisions — including tax incentives for clean energy — through budget reconciliation, a process that allows certain budget items to bypass the filibuster, Bledsoe noted.

Tom Pyle, president of the American Energy Alliance, cautioned that the Senate wins only give Democrats "functional control" of the chamber.

"It’s a better hand for the Democrats, but the fundamentals don’t change," said Pyle, who led Trump’s Energy Department transition team. "They don’t have a lot of wiggle room. Whatever the administration can do legislatively will largely be determined by the art of the possible in the United States Senate."

He noted that aside from Manchin, other conservative Democrats may balk at sweeping climate legislation.

Still, Pyle noted that by chairing committees, Democrats will have the upper hand on oversight and investigations — and that regulatory efforts would likely face little congressional scrutiny.

"They could move more quickly," he said, noting that Democrats could use oversight hearings to "help frame their objectives."

"That will be the backstop," Sen. Kevin Cramer (R-N.D.) said of the courts in a Fox Business interview yesterday.

Cramer added in the interview, which aired before Ossoff’s race was called, that Democrats had voted against many Trump Cabinet nominees and that if Republicans were to lose the majority, "we lose that leverage over the new administration."

He complained that energy companies already faced onerous regulations for installing pipelines, calling it "bad enough as it is with all the consent decrees and the liberal courts."

That Trump and Senate Majority Leader Mitch McConnell (R-Ky.) installed more than 300 judges, he said, is a "bright spot … I just hate to litigate everything."

Biden is likely to face increased pressure from the left, who want swift action on climate change. Sen. Ed Markey (D-Mass.), who co-sponsored the sweeping Green New Deal climate plan that Biden did not embrace, suggested via Twitter that a Democratic Senate means "the age of incrementalism is over."

And the Sunrise Movement, which has successfully championed progressive picks for Biden’s Cabinet, greeted the Georgia wins with a tweet: "The Decade of the Green New Deal has just begun."

But neither Warnock nor Ossoff supported the Green New Deal. They did, however, embrace green energy as a means of tackling climate change, addressing racial injustice and providing jobs.

His campaign platform pledged that he’d encourage investment in clean energy and commit to transitioning to a clean economy by 2050.

Ossoff told CNBC in July that he’d "fight for massive investment in clean and renewable energy and transitioning away from carbon-emitting energy production."

It presented Biden with a draft executive order that would declare a climate emergency under the 1976 National Emergencies Act (NEA), using it to reinstate the federal ban on crude oil exports and divert part of the military budget to invest in clean energy infrastructure. The order also would use the Clean Air Act to restrict greenhouse gas emissions, as former President Obama tried to do, and mobilize U.S. production of clean energy technologies under the Defense Production Act (DPA).

Another order would direct the secretaries of Energy and Defense to use the authority of the DPA to "mobilize domestic production of clean and renewable energy" on a six-month deadline. That is the same Cold War-era law that Trump used sparingly at the start of the coronavirus pandemic to increase the supply of hospital respirators.

"The point of the DPA order is to jump-start the clean energy economy, and then we look at utilities, community solar providers and [municipal power authorities] to purchase the power," said Jean Su, staff attorney with the Center for Biological Diversity, an organizer of the climate action group petition.

Joshua Gotbaum, a guest scholar in the Brookings Institution’s Economic Studies Program, administered the DPA in the Clinton administration as an assistant secretary of Defense for economic security.

"What the Defense Production Act lets the president do is cut red tape and work with businesses more flexibly than otherwise," Gotbaum said. It allows federal agencies to collaborate with businesses to increase production of critical materials during emergencies and then direct them to essential needs.

The authority could be used, for example, to increase domestic production of lithium, a critical ingredient in electric vehicle batteries, he added.

The president can also use executive authority to speed government approvals of projects under DOE’s existing loan guarantee authority, he said.

Sen. Jeff Merkley (D-Ore.), noted in a commentary last month that Biden has called the climate challenge a "national emergency" and urged the incoming president to use emergency powers to take executive action.

"I understand that many people may still feel trepidation about using these powers to address the climate crisis. However, we know that continuing on our current path will be catastrophic, and will hit working people the hardest," Merkley said in a Washington Post op-ed.

But David Bookbinder, chief counsel of the nonprofit Niskanen Center think tank, said in an email that, notwithstanding whether climate policy falls under the NEA’s definition of an emergency, "I don’t think anyone has tried to figure out just what such a declaration would accomplish."

He wrote in a November blog post that a national emergency declaration can only free up a limited set of powers spelled out in other statutes. "As far I can tell, they don’t provide much in the way of tools to combat climate change."

For example, the Powerplant and Industrial Fuel Use Act of 1978, adopted as the U.S. battled embargoes on Middle East oil imports, allows the president, after declaring a severe energy supply interruption, to prohibit power plants from using natural gas or petroleum. But the authority only lasts 90 days and can be extended only if neither the House nor Senate objects, he said.