Will Trump name a scientist? A poli-sci grad runs the show 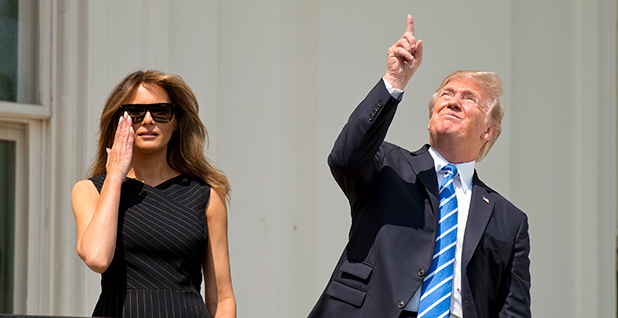 President Trump does not have a science adviser. He's seen here pointing at the sun during a solar eclipse in August. Ron Sachs/picture-alliance/dpa/Associated Press

A job that’s been held by some of the nation’s top scientists is now occupied by a 31-year-old politics major from Princeton University.

And it’s unlikely to change soon, observers say, leaving President Trump without a science adviser as the administration wrestles with a severe outbreak of the flu, lead-poisoned drinking water and record-breaking disasters that many scientists say are sharpened by rising temperatures.

More than a year into his term, Trump hasn’t identified a potential nominee for the key position held by prominent scientists in Republican and Democratic administrations alike. And it stands to get harder. There’s a razor-thin margin for Senate approval, and Trump’s critics and supporters could complicate the confirmation of anyone who rejects mainstream climate science.

That means the job falls to Michael Kratsios, the deputy assistant in the Office of Science and Technology Policy. At least for now. Kratsios graduated from Princeton in 2008 with a political science degree and a focus on Hellenic studies. He previously served as chief of staff to Peter Thiel, the controversial Silicon Valley billionaire and Trump ally.

The vacancy might reflect Trump’s skepticism on climate change. If the president believes that the Senate would balk at a nominee who questions widely accepted views on climate change, he might prefer to leave the post open, said William Happer, an emeritus physics professor at Princeton University who is considered a leading candidate for the job. Happer says the Earth is experiencing a "CO2 famine."

"There is no problem from CO2," Happer said last month in an interview with E&E News (Climatewire, Jan. 25).

The Senate showed its disapproval with ideological science nominees earlier this month. Kathleen Hartnett White, Trump’s pick to lead the Council on Environmental Quality, withdrew when faced with flagging Senate support. White denied that carbon dioxide was a pollutant, calling it the "gas of life" instead.

Happer envisions a similar outcome for himself.

"I would guess that the president feels that the sort of nominee that could pass muster with enough senators is someone that he probably doesn’t need," said Happer, who’s still open to serving as science adviser. "It is unlikely I could get through a confirmation hearing because I would not weasel word."

The absence of a science adviser concerns those who have held the position. They say leaving the office vacant makes the nation more vulnerable. The position can be a quiet post for months, or even years, only to be hurled into a national crisis in an instant, said Neal Lane, who served as science adviser under President Clinton and is now a senior fellow at Rice University’s Baker Institute for Public Policy.

President George W. Bush had an anthrax scare, and Obama oversaw the Deepwater Horizon disaster and an Ebola outbreak. All of them required a scientific leader to help coordinate an informed and quick response, Lane said.

In the last year, a science adviser could have helped Trump navigate a series of deadly hurricanes and wildfires, nuclear tensions with North Korea and Iran, and climate change, observers said. All of them can be the type of situation where Cabinet secretaries and political advisers offer competing viewpoints. So it’s essential to have one person who can filter those voices through an objective lens informed by science.

"You need somebody who the president trusts, who can sort all that stuff out and who can explain to the president that there are all these different perspectives and here’s why there are and here’s what I think," Lane said. "There is nobody like that with regards to science, technology and engineering matters, so we have a crisis, and there may be some brewing that you and I don’t know even about. Usually they come as surprises, and that’s scary."

It’s unclear if the White House is planning to nominate a science adviser. Public schedules obtained recently by Science magazine showed some meetings on Kratsios’ public calendar related to the selection of an adviser. But that happened almost a year ago. Officials from the White House and the Office of Science and Technology Policy (OSTP) did not return requests for comment.

The post is empty during one of the worst flu seasons in more than a decade. The virus has killed dozens of people across the country.

The science office was authorized by Congress in 1976. It currently has about 50 employees, down from about 135 when it was run by Obama’s science adviser, the physicist John Holdren. Kratsios told The Wall Street Journal in November that he wants to expand the office to about 60 employees. In addition, the White House is seeking to reorganize the National Science and Technology Council, which was created in 1993, coordinates science policy and budgets across multiple agencies, and is chaired by the president.

There is no public indication that the White House accepts the large body of scientific research that shows humans are warming the planet at an unprecedented pace, chiefly through the burning of fossil fuels. In recent weeks, Trump and EPA Administrator Scott Pruitt have claimed that global warming could benefit humanity, even though thousands of studies have found the opposite to be true.

While Holdren focused on climate change as a crisis that required government intervention, Kratsios has repeated an administration talking point that downplays the role of human activity in rising temperatures.

"The climate is changing, and I don’t think anyone is disputing that," Kratsios told The Wall Street Journal in November.

Holdren was named as Obama’s science adviser before his inauguration and served for the duration of Obama’s presidency. Holdren is now a professor of environmental policy at Harvard University.

Bush’s science adviser, John Marburger, took office in September 2001. He was a physicist and director of the Brookhaven National Laboratory.

Democrats and the nation’s leading scientific organizations have pushed Trump to name his own science adviser, pointing out that other presidents had advisers in place at far earlier stages of their term. A group of Democrats, including Sens. Cory Booker of New Jersey and Ed Markey of Massachusetts, sent a letter to the White House requesting that a science adviser be named as soon as possible.

"In previous administrations, OSTP was central to disaster mitigation efforts, including hurricanes — but when Hurricane Irma, Harvey and Maria struck the U.S., OSTP lacked key leaders," the lawmakers wrote. "Scientific and technical input would also have contributed to decisions around climate change, the Iran nuclear deal and North Korea’s nuclear program — areas where key decisions have been made over the past nine months in absence of a science adviser and other officials."

An expert who rejects basic climate science will be difficult to get through the Senate, as Hartnett White’s situation showed, said Andrew Rosenberg, director of the Center for Science and Democracy at the Union of Concerned Scientists.

And injecting scientific objectivity into the process of rolling back regulations and health protections is not a priority of the administration, he said.

A White House official told E&E News this week that the search for a science adviser is still underway and that a "triumvirate" is running OSTP, including Kratsios, deputy chief of staff Ted Wackler and general counsel Rachael Leonard (Greenwire, Feb. 6).

The science adviser position is one of a few major scientific vacancies in the Trump administration.

Though Rep. Jim Bridenstine (R-Okla.) has been nominated to lead NASA, his confirmation has stalled in the Senate amid opposition from Democrats and some Republicans who say he could politicize the agency. Barry Myers, the AccuWeather Inc. CEO appointed to lead NOAA, is also hung up in the Senate.