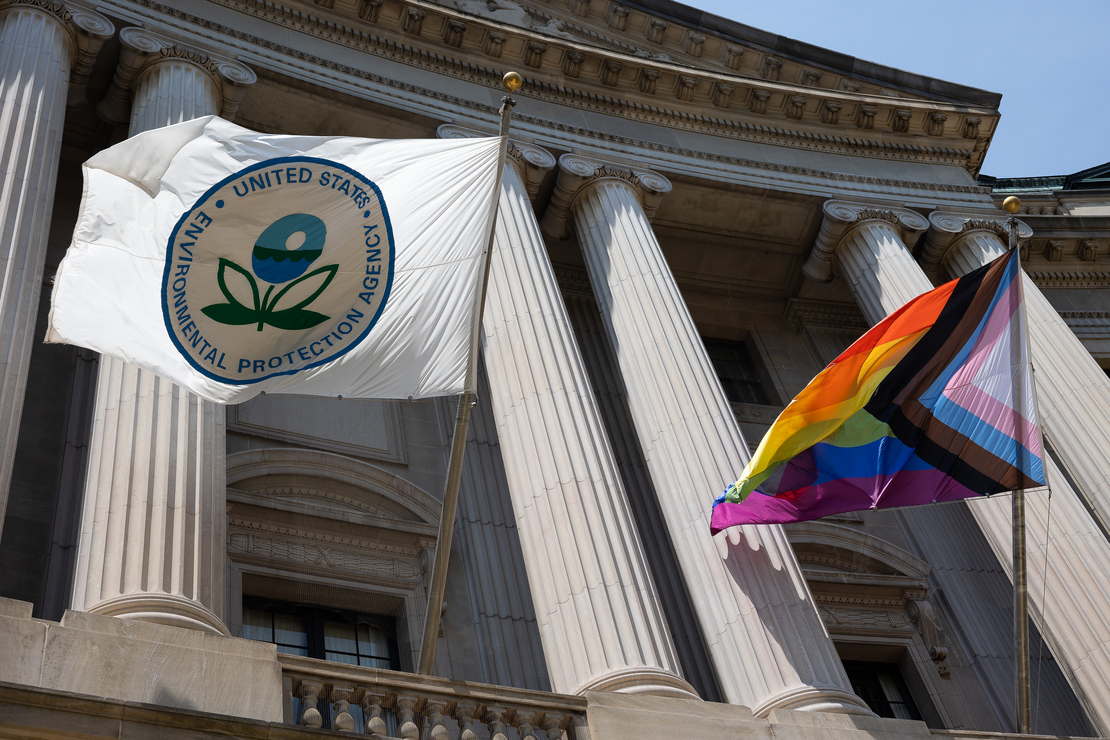 The EPA flag and an LGBTQ+ flag fly at EPA headquarters in Washington on June 1. Francis Chung/E&E News

When Jeff Marootian started his government career about two decades ago, he didn’t expect he’d ever attend a ceremony to fly a pride flag outside a federal agency.

“The thought that we could be here celebrating, raising a pride flag with a Cabinet secretary, with agency leadership, would have been unimaginable,” Marootian — now a White House special assistant for climate and science personnel — said earlier this week outside the Energy Department’s headquarters.

He was there to mark the second straight year that a rainbow pride flag has gone up outside the department to commemorate lesbian, gay, bisexual, transgender and queer Pride Month in June.

Downtown Washington has gotten more colorful this month as DOE and other federal agencies have hoisted rainbow flags to adorn their drab headquarters. It represents a stark shift from just a few years ago, when the Trump administration rejected requests to fly rainbow pride flags from federal properties.

Pride flags are also flying outside EPA, the Agriculture and Interior departments, and a host of other federal agencies, some for the first time ever. The General Services Administration — which functions as the federal government’s landlord — has approved 42 requests to fly the rainbow pride flag this month, GSA spokesperson Christina Wilkes told E&E News in a statement.

Federal workers who identify as LGBTQ+ said they welcome the proliferation of pride flags and the executive orders and memos President Joe Biden issued in support of their community. The symbolism of the flags and the White House policies, they said, have made federal employees who are part of the community feel they and their work were recognized by their new bosses.

“What it feels like is we are being written into the equal opportunity fabric,” Meghan Walter, a founding chair and adviser to Pride in Federal Service, a network of federal LGBTQ+ employee resource groups, told E&E News. “We are becoming business as usual, instead of a special request or an afterthought.”

One in seven political appointees in the Biden administration identify as LGBTQ+, Marootian said. He praised the administration’s efforts to ensure the community’s safety and protection “in the face of relentless attacks” that it faces.

“It is so important that we’re here together to celebrate, to reflect on all of the wins that we’ve had as a community, but to always remember that we must continue to persevere in the face of everything that’s going on, not just here but also around the globe,” he said.

Biden last month issued a presidential proclamation urging “the people of the United States to recognize the achievements of the LGBTQ+ community, to celebrate the great diversity of the American people, and to wave their flags of pride high.”

Energy Secretary Jennifer Granholm said Monday that as long as she’s running the department, the pride flag “will go up every June” (Greenwire, June 6).

Interior Secretary Deb Haaland said she’s proud to be flying the Progress Pride Flag at her agency again this year.

“Justice and equality for LGBTQ+ people is more than just a policy issue for me; it’s personal,” she told E&E News in a statement. “I am fully committed to making the Interior Department a leader on inclusion and equity and to ensuring our decisions are informed by and centered around the voices of a diverse American public.”

It’s an about-face from the Trump administration, in which a controversy arose over displaying a pride flag at a national monument.

In 2019, senior Trump administration officials intervened when the National Park Service flew a pride flag at the NPS monument at the Stonewall Inn, a historic site in the gay rights movement. A Trump official ordered the flag to be removed, emails later revealed. The flag was then flown at Stonewall on a flagpole deemed not on federal property (Greenwire, June 24, 2019).

Trump officials weren’t opposed to some other flags flying from their departments.

Former Trump Interior Secretary Ryan Zinke drew criticism for flying a special secretarial flag from the roof whenever he was at headquarters (Greenwire, Oct. 13, 2017).

Also during the Trump administration, U.S. embassies were told they couldn’t fly the rainbow pride flag from their flagpoles during Pride Month, NBC reported in 2019, although pride flags were on display elsewhere on embassy grounds.

Agencies that occupy GSA space, or employee groups within those agencies, must get permission before they can fly a pride flag.

“As EPA is in a GSA building, we needed to get GSA approval,” EPA spokesperson Nancy Grantham said, sharing GSA’s flag policy with E&E News.

Last June, GSA announced it would grant requests to fly the pride flag at GSA facilities across the United States. “This historic action underscores GSA’s commitment to inclusion and allyship. GSA affirms that all are welcome at GSA, regardless of how they identify or who they love,” the agency’s then-acting Administrator Katy Kale said at the time.

The Department of Agriculture is flying its pride flag on prime real estate at its headquarters on the National Mall.

Jeremy Wood, president of Equality USDA, the LGBTQ+ employee resource group at the department, said USDA is committed to not only supporting federal workers who identify with that community, but also to ensuring that it is equitable in the delivery of its programs and services to the public.

“It is important to him that we really embed this into the way we do business,” Wood said, referring to Vilsack. “It means more than just being a performative measure.”

A pride flag is on display at the Treasury Department for the first time in history, Secretary Janet Yellen wrote on Twitter. Other agencies, like the Nuclear Regulatory Commission and the Transportation Security Administration, said they have raised the flag for the first time this year.

The Progress Pride Flag is also waving outside the Commerce Department this month. Others also have the flag up, like the Department of Health and Human Services and the Office of Personnel Management.

One department where you won’t see a pride flag: the Pentagon.

Agency spokesperson Charlie Dietz said in an email that after “some careful consideration,” the Defense Department “will maintain the existing policy from July of 2020 regarding the display or depiction of unofficial flags.”

That policy was originally put in place to ban the Confederate flag, Dietz said. “There is not an exception at this time regarding the pride flag. This was really more about the potential for other challenges that could arise from that exception.”