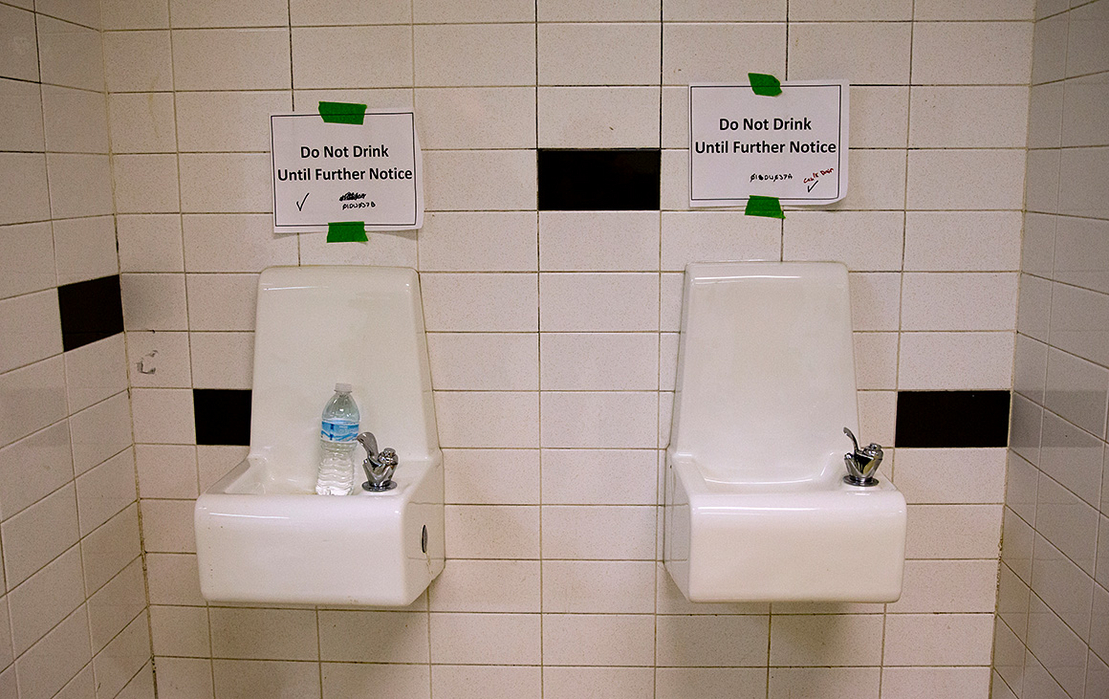 This 2016 file photo shows drinking fountains marked "Do Not Drink Until Further Notice" at a school in Flint, Mich., after the area’s lead contamination crisis. Carolyn Kaster, File/AP Photo

That includes establishing a partnership between EPA and the departments of Education, Health and Human Services, and Agriculture to zero in on lead remediation in schools and child care centers.

The Cabinet-level Partnership for Lead Remediation in Schools and Child Care Centers aims to achieve President Biden’s commitment to reduce lead exposure in 400,000 schools and child care facilities. Its first step will be to convene joint stakeholder discussions to gather input from people affected by lead contamination at schools and child care centers, with those conversations meant to identify priorities and data gaps and aid the development of guidance specific to lead contamination in school and child care settings.

Environmental health groups for years have highlighted the fact that schools and child care centers can commonly be unseen lead contamination hot spots. For decades, utilities testing lead in drinking water, for example, were not required to ensure taps at schools were safe. That’s something that will now change with the Trump-era lead and copper drinking water regulation taking effect while the Biden administration works to revamp it by 2024 (E&E Daily, Dec. 16).

The estimated 13 million children who spend at least 35 hours a week in child care settings are particularly vulnerable to lead contamination, as most states don’t include any environmental health reviews in their child care center licensing regulations.

Even as lead contamination at schools and child care centers has consistently flown under the radar, targeting lead exposure to kids there could result in big gains for public health. Lead, a potent neurotoxin that affects brain function, is particularly dangerous for toddlers and young children because of their stages of development.

It could also help address environmental inequities for schools with a majority of students of color. One Government Accountability Office analysis found that schools whose student population was more than 50 percent of color and schools where 70 percent or more of students were eligible for free or reduced-price lunch had a higher frequency of “unsatisfactory environmental conditions,” including lead contamination.

Vice President Kamala Harris today after unveiling the plan in Washington emphasized she’s heard from parents across the country for years about their fear regarding lead. Calling it a “national emergency,” Harris said children drinking from water fountains fed by lead pipes and sleeping in bedrooms coated with lead paint have resulted in more than half of U.S. children under age 6 being at risk of lead exposure (Greenwire, Sept. 29).

“Parents who were worried that every time they turned on the faucet to get their child a glass of water that they may be filling that glass with poison,” she said during a speech at the AFL-CIO’s headquarters. “The science is clear about what drinking water from a lead pipe can do to the human body. … For children, it could severely harm mental and physical development; it can stunt growth, slow down learning and cause irreparable damage to the brain.”

One key aspect of the partnership could be unnamed actions HHS will pursue through its Office of Head Start and Office of Child Care, while USDA will fund eligible water filtration projects at schools and child care facilities through its Community Facilities and Business programs.

HHS’s Administration for Children and Families did not immediately comment when asked for more details on the plans, but it’s possible those actions could build upon recommendations that EPA’s Children’s Health Protection Advisory Committee made to the agency in July saying it should partner with HHS’s Office of Head Start “to help incorporate environmental health criteria” into the office’s existing performance standards for the preschools serving low-income students.

As of 2020, only one in four Head Start child care centers tested for lead in drinking water at the tap, of which about one in 10 found detectable levels of lead, according to the Government Accountability Office. Increased testing and remediation at such centers, which by definition serve low-income communities, could help address environmental injustice, but the report found that the Office of Head Start “is not prepared without further direction from EPA and collaboration with other partners to address any questions or speak effectively on lead testing of drinking water.”

Ultimately, the GAO recommended that the Office of Head Start require its grantees to document that water they provide children has been tested for lead, and that EPA’s Office of Water work with the program.

“These populations are more vulnerable and susceptible to lead poisoning,” she said.

Paul, who trains child care providers on how to make their centers environmentally safe, said those who do understand the risks and want to protect their students may run into logistical and financial barriers when it comes to lead in drinking water.

“A lot of times providers are like, ‘OK, great, I want to do this, but I don’t have funding even for testing,’ and if you do the testing and don’t have support for remediation, it just opens up a can of worms,” she said.

Those cost considerations only became starker during the pandemic, since providers are now having to pay for Covid-19 safety measures, as well.

John Rumpler, clean water program director at Environment America who has researched the prevalence of lead contamination in schools, said the administration’s prioritizing remediation in educational settings “makes perfect sense from a public health perspective since lead is so damaging to kids’ health and contamination of schools’ water is widespread.”

He also said the best way to help child care centers, which often operate out of providers’ homes, with lead exposure is by replacing all lead pipes nationwide, something the lead action plan already aims to do with the release of $15 billion today that was included in the infrastructure package.

“We look forward to hearing more details about what more the EPA and Cabinet-level partnership will do to advance safe drinking water at schools,” he said.

The partnership is not without funding. Money EPA Is allocating through the Water Infrastructure Improvements for the Nation (WIIN) Act, which includes $25 million in 2022 to improve drinking water in underserved and disadvantaged communities, could be used toward this effort.

Similarly, the Department of Education will use American Rescue Plan funds for elementary and secondary schools to “continue to advance healthy school environments,” according to a White House fact sheet.

For its part, the Centers for Disease Control and Prevention’s Childhood Lead Poisoning Prevention Program will release grants to communities to help educate child care providers and school staff about lead poisoning and the importance of early lead screening. The program will also establish partnerships with local and state agencies to conduct water testing for lead to assure child care facilities are lead safe or lead free.

In her remarks today, Harris highlighted that the White House plan targets funding opportunities to underserved communities, a move she said is critical given that action is usually taken to reduce lead in communities that have money and influence.

The CDC will also close gaps in testing children for elevated levels of lead in their blood. Pediatricians routinely test children for lead in their blood at the ages of 1 and 2 years old. The CDC’s Childhood Lead Poisoning Prevention Program keeps track of that data, providing education and outreach to communities and helping respond to concerns linked to individual day care facilities. The surveillance is used to track trends and identify risk hot spots to ensure federal investments in lead remediation reach areas with the highest levels of exposure.

Now the Biden administration says the program will also be used to ensure that replacing lead pipes doesn’t inadvertently increase lead levels — as can happen when pipes are only partially replaced. Vibrations from construction work, including removing lead pipes, can actually accelerate lead leaching out of pipes by knocking off lead chips that have been corroding from the pipes.

“As service line replacement occurs, it is important to minimize unintended consequences by continuing to test the water supply and ensure that children are screened for blood-lead levels in high risk areas,” the White House said in the fact sheet.

Today’s announcement builds on a few other actions that will also help protect young kids from lead exposure.

By allowing the Trump administration’s lead in drinking water regulation to take effect while working to strengthen requirements by 2024, EPA will for the first time require utilities to test drinking water at schools and day care facilities for lead.

The rule will also require water utilities to create inventories of lead service lines to be replaced within the next three years.

But EPA also laid out areas where it plans to strengthen and simplify the regulation by 2024, including imposing stricter samples at the tap, requiring all lead services lines to be replaced and potentially strengthening the levels of detected lead at which water utilities must take action. And in addition to encouraging the replacement of full lead service lines, EPA said it will provide training, guidance and tools for developing replacement programs to help ensure the process is equitable.

The CDC, too, has been taking action on lead already this fall by updating its definition of lead poisoning in young kids.

The agency now considers children between the ages of 1 and 5 years old to have elevated levels of lead in their blood if blood tests show more than 3.5 micrograms per deciliter. That number used to be 5 micrograms per deciliter, and when the CDC lowered the number in October, the agency said nearly twice as many children nationwide could now be considered lead poisoned and eligible for early intervention services (E&E News PM, Oct. 28).