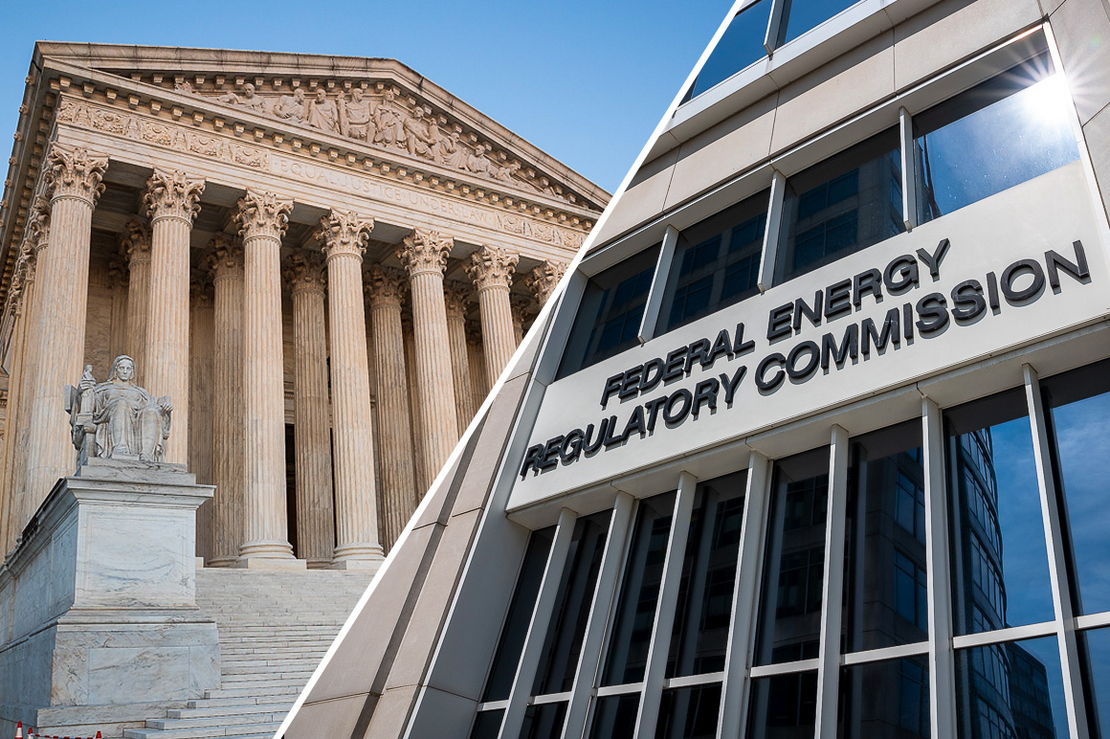 The landmark Supreme Court decision last week restricting EPA’s regulation of climate-warming emissions could spill over to the Federal Energy Regulatory Commission, which is seen as critical for advancing clean energy.

In a 6-3 opinion, the Supreme Court ruled that the Clean Air Act did not authorize EPA to craft a broad rule targeting emissions from power plants like the Obama-era Clean Power Plan.

The court majority justified the ruling using the “major questions” doctrine, a relatively new legal theory that holds that Congress must clearly express when agencies are allowed to decide matters of “vast economic and political significance” (Greenwire, June 30). Some observers say that could stunt potential new rules from agencies such as FERC, particularly on issues that pertain to climate change.

“The major questions doctrine, as they articulated it now, is so broad you could apply it to any major rulemaking,” said Harvey Reiter, a partner at Stinson LLP whose focus includes energy regulations. “[The decision] talks about cases of great ‘economic and political significance,’ but that could characterize any major rule of any agency.”

Charged with overseeing wholesale power markets and interstate energy projects, FERC is weighing rules that could transform the electric power sector and help facilitate the deployment of solar, wind and other clean energy resources (Energywire, June 17). With support from its Democratic majority, the five-person commission this year also proposed changing how it reviews new natural gas projects to account for effects on the climate, nearby landowners and environmental justice communities (Energywire, March 25).

Some legal experts say those actions fall clearly within FERC’s authority to ensure “just and reasonable” energy rates — as outlined in the Federal Power Act — and to approve gas pipelines that are shown to be in the public interest. But others said the Supreme Court decision may give ammunition to industry groups and others who’ve argued for a more narrow reading of what FERC can and cannot do, experts said.

“Even though agencies are different and have different statutory mandates, any agency that’s thinking about being ambitious in addressing climate change now has to worry that a federal court may use the language of the major questions doctrine to attack whatever the agency is doing,” said Joel Eisen, a professor of law at the University of Richmond.

In particular, a proposal issued in February to assess natural gas pipelines’ greenhouse gas emissions could be at risk of being abandoned or changed significantly due to concerns about the major questions doctrine, some analysts said.

After the commission approved the proposal in February, Republican Commissioner Mark Christie invoked the major questions doctrine in opposing the policy. He criticized the measure, which attempted to outline a framework for quantifying new gas projects’ greenhouse gas emissions, in part because Congress had not authorized FERC to take such a step, he said (Energywire, Feb. 18).

“The fundamental changes the majority imposes today … clearly exceed the Commission’s legal authority under the NGA and NEPA and, in so doing, violate the United States Supreme Court’s major questions doctrine,” Christie said in his dissent, using acronyms for the Natural Gas Act and the National Environmental Policy Act.

Others have said FERC is required by law to assess projects’ contributions to climate change and has the authority to encourage developers to reduce their greenhouse gas emissions, just like it does with other environmental impacts.

“We need to consider all evidence as to whether a proposed project is needed,” FERC Chair Richard Glick, a Democrat, said in February.

All told, the Supreme Court decision seemed to “strengthen the hand” of those who have said FERC cannot assess upstream and downstream greenhouse gas emissions, said Christi Tezak, managing director at ClearView Energy Partners. But even before last week’s decision, the future of FERC’s proposed greenhouse gas policy was in doubt.

Following pushback from members of Congress and industry groups, FERC turned the greenhouse gas policy and a related set of pipeline permitting reforms into “drafts” in March. Since then, Glick — who will need to be reconfirmed by the closely-divided Senate to stay in his position after this year — has said he hopes to revisit the proposals soon and potentially finalize them with changes supported by one or more of his Republican colleagues.

Neil Chatterjee, a former Republican commissioner and chair at FERC, said the Supreme Court ruling could make the policies even more politically untenable.

“What [the ruling] will do is give those challenging FERC infrastructure policies a huge weapon,” said Chatterjee, who is now a senior adviser at Hogan Lovells.

Environmental groups and some legal experts have disputed the notion that the major questions doctrine could stand in the way of FERC considering climate impacts, arguing that the commission has broad discretion to balance all costs and benefits of a project before approving it. Differing from Chatterjee, Ari Peskoe, director of the Electricity Law Initiative at Harvard Law, said the Supreme Court ruling should not change that.

“FERC clearly has authority over permitting pipelines, and Congress chose to grant FERC wide discretion in permitting decisions,” Peskoe said in an email.

Outside of the natural gas pipeline proposal, it’s less clear as to whether other upcoming new rules from agency could be affected by last week’s ruling, several observers said.

Over the past year, FERC has been planning a series of new rules to reform the electric transmission system and help unlock wind and solar projects constrained by power line access or delays in connecting to the grid. In light of the Supreme Court decision, the durability of those reforms could depend on “how far the commission goes” and whether a supermajority of commissioners support the final rules, among other factors, Chatterjee said.

“Depending on the statutory authority the agency may rely upon and the scope of the changes planned, FERC may well draw challenges under the major questions doctrine,” Reiter, the Stinson LLP attorney, wrote in a recent article for the Energy Bar Association regarding the transmission reforms.

Ultimately, the Supreme Court ruling’s implications for FERC broadly could depend on how lower courts interpret the decision. As of now, the Supreme Court has yet to lay out “any clear rules” as to how and when the major questions doctrine would apply for different federal agencies, Peskoe said.

“Given the flexible nature of FERC’s authority, it’s plausible that Courts would not apply the MQD [major questions doctrine] at all,” Peskoe said in an email. “That said, one of the problems with the MQD is that it’s a moving target.”