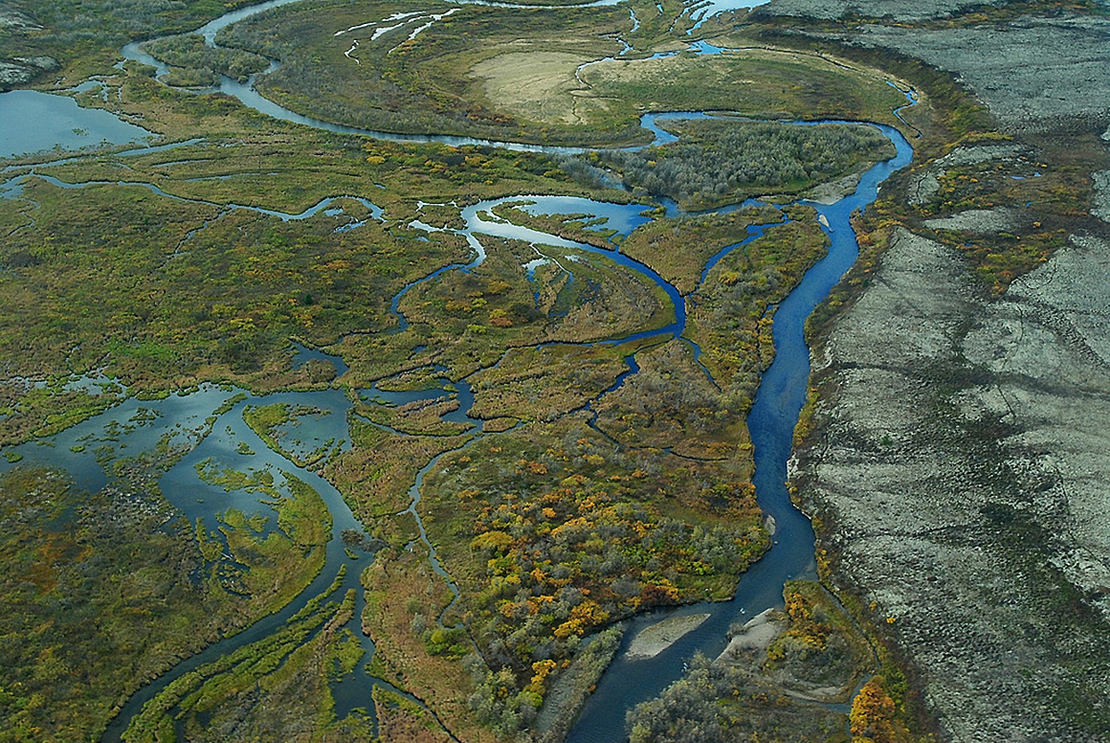 Aerial view of wetlands and tundra in the Bristol Bay watershed in Alaska. Environmental Protection Agency/Flickr

EPA’s move to ban mining the Pebble deposit in the Bristol Bay watershed this week set off a swirl of questions about whether the proposed Clean Water Act veto could have broader implications for mining in one of the world’s premier salmon habitats.

But a close look at the agency documents explaining the decision makes it crystal clear: The Pebble veto won’t stop mining in Bristol Bay, much less the rest of the Last Frontier.

EPA’s proposed veto Wednesday only targets efforts to mine the Pebble deposit. It was based on a mine plan Pebble LP and its backer Northern Dynasty Minerals Ltd. submitted to the Army Corps of Engineers as part of the Clean Water Act permitting process two years ago.

That mine plan specifically affected three watersheds, the South and North Forks of the Koktuli River and the Upper Talarik Creek, where it would permanently damage 99 miles of stream habitat and more than 2,000 acres of wetlands. EPA says it is vetoing the project because it would result in four “unacceptable adverse effects” on aquatic life and habitat, including the loss of salmon habitat and negative effects on the genetic diversity of salmon in the watersheds.

The veto is limited to certain headwaters of those watersheds, and includes approximately 309 square miles surrounding the 2020 mine plan. There are other mine claims within that restricted area, however the veto documents are clear that the restriction only applies to mining the Pebble deposit, specifically.

What’s more, mining the Pebble deposit is only prohibited by the proposal if dredging and filling of wetlands and streams associated with mining would have similar or greater effects to any one of the four “unacceptable adverse effects” EPA identified the 2020 mine plan would cause.

Casey Sixkiller, regional administrator for EPA Region 10, said in a statement the proposed veto would only affect mining the Pebble deposit “within specifically defined areas of the Bristol bay watershed that could have adverse effects on salmon fishery areas.” The action “does not apply to any other mine deposits” or projects elsewhere in Alaska.

“EPA understands the need for sustainable use, development, and protection of Alaska’s natural resources, which are key to supporting healthy communities and a thriving economy,” Sixkiller said.

That message hasn’t gotten across to mining industry stakeholders — including state regulators and lawmakers — who this week have feared the veto would impede interest in mining the entirety of the 40,000-square-mile Bristol Bay watershed, and potentially the whole state.

“I hear from large and small mining companies across the globe that Pebble comes up in their boardrooms every single day as an example of regulatory uncertainty,” said Deantha Skibinski, executive director of the Alaska Miners Association. “Everyone talks about Pebble and [asks], could that happen to us?”

Meanwhile, opponents of the Pebble mine who wanted widespread protections from mining near the watershed are mindful the veto will have its limits.

“I would say that this is a great step forward, but this is in no way a victory yet,” said Alannah Hurley, executive director for United Tribes of Bristol Bay. “We are going to need further action in the future as well.”

Opponents of Pebble mine have pushed for broader protections of the Bristol Bay watershed as the Biden administration and congressional lawmakers on both sides of the aisle have come out forcefully in support of more mining to supply electric vehicles and renewable energy projects.

Alaskan politicians mindful of the need for this mining were in the midst of selling the state to mining companies and investors as a future hub for their business as EPA prepared the veto proposal this winter.

In December, Alaska Gov. Mike Dunleavy (R) announced to rapturous applause at the annual conference of the American Mining & Exploration Association that his state would pursue taking over wetlands permitting under Section 404 of the Clean Water Act (Greenwire, Dec. 10, 2021).

Currently, Alaska is home to six large mines — five gold mines and one coal project — and two mines currently in the permitting process: Pebble and Donlin Gold, which is also located in southwestern Alaska. Donlin has received all its federal permits and is proceeding through state permitting.

In addition, Alaska is home to many other projects in the exploration stage, meaning work is ongoing to scrutinize the feasibility and economics of mining their mineral reserves.

One of those exploration projects is Groundhog, a copper prospecting project 3 miles north of the Pebble deposit overseen by Kijik Corp., a subsidiary of an Alaska Native corporation, and Lion Copper and Gold Corp., a Canadian mineral exploration company.

EPA in its 2014 proposed veto determined the “potential impacts of large-scale mining” at the Pebble deposit “are generally applicable” to Groundhog and other mining projects under development in Bristol Bay.

The Groundhog project falls within the geographical area covered by EPA’s 2022 Pebble veto, but the newly proposed restriction does not apply to it.

Karen Robertson, a spokeswoman for Lion Copper and Gold, told E&E News in a brief phone interview the company believes the Pebble veto “doesn’t affect” the Groundhog project. She declined to elaborate.

But Williams said opponents see the veto leaving room for more action to truly protect the area’s popular salmon fishing grounds from new mines. “Ultimately, we’d like to see watershedwide safeguards for Bristol Bay,” she said. “There are other tools in the toolbox we would like to see used.”

Williams and Hurley both called for legislative protections against mining in Bristol Bay. Each declined to comment on the status of discussions with federal lawmakers or the Biden administration about the subject.

Despite the targeted nature of the veto, it invited a stern rebuke from Dunleavy, who said it could “very well become the template” to stop new mines in Alaska. Sen. Lisa Murkowski (R-Alaska), who opposes the mine, nevertheless opposes the veto, calling it a “blanket, preemptive approach” that could be “used as precedent to target resource development projects across our state.”

Murkowski also said there would be nothing to stop a potential future administration from revoking the EPA veto, should it become finalized.

That interpretation doesn’t exactly square with the history of the veto, which EPA has only used 13 times in 50 years of Clean Water Act protections.

Only four small modifications to vetoes have ever been approved, though the Trump administration did try to claim that a fifth veto of a flood control project in Mississippi, the Yazoo Pumps, from 2008 did not apply to a 2020 version of the same project. The Biden EPA is now reviewing claims made under the Trump administration that a 2020 version of the pump project would not have the same impacts on wetlands as the initial vetoed version.

If the Pebble proposal is finalized, it would be the first use of a veto in Alaska.

Jason Brune, commissioner of the Alaska Department of Environmental Conservation, told E&E News that, along with suing EPA if the veto is finalized, the state would “continue to pursue” taking over Clean Water Act wetlands permitting to ensure future mine permitting decisions are “in the state of Alaska’s hands” to avoid other mines being stopped by the federal government.

Brune, who previously championed the Pebble mine in the private sector, acknowledged obtaining primacy would “not circumvent” EPA’s veto authority under Section 404(c) of the Clean Water Act.

Giving the state wetlands permitting authority over EPA would let it supersede the federal government’s compensatory mitigation requirements and stop dealing with “armchair environmentalist activist[s]” who “want to worry about someone else’s backyard rather than their own,” he said.

Brune’s complaints center on requirements in the Clean Water Act that when permitting projects that damage wetlands, the Army Corps of Engineers is supposed to require developers to perform “compensatory mitigation” by restoring or preserving wetlands and streams to offset the damage.

An E&E News investigation four years ago found that the Alaska District of the Army Corps was only requiring such mitigation for 26 percent of permit applications filed between 2015 and 2017 (Greenwire, May 29, 2018).

But the Army Corps’ Alaska District has often diverged from that memo, including when it comes to permitting major extraction projects. Its permit for the Donlin Gold mine, for example, required 4 acres of wetlands offsets for a pipeline to the mine that would destroy 200 acres of wetlands and 1,363 linear feet of streams (Greenwire, Aug. 16, 2018).