Gina McCarthy on the clock to propel Biden’s climate agenda 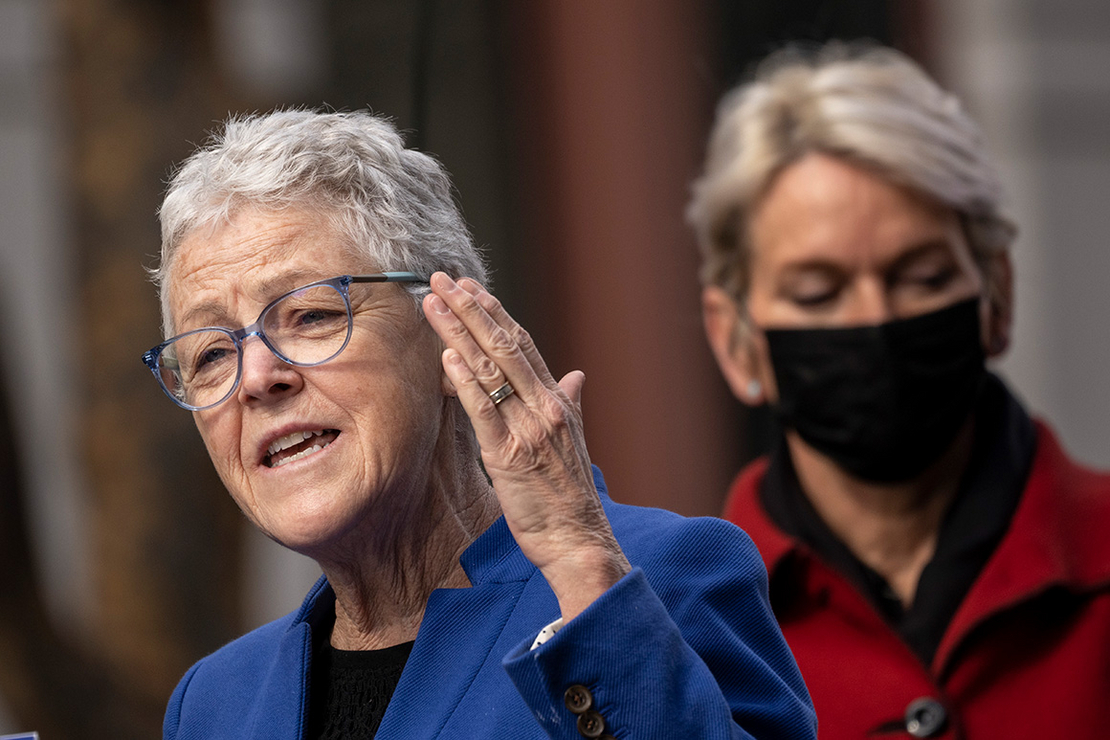 McCarthy, who has served as Biden’s climate adviser for more than a year, plans to leave the White House in the coming months, E&E News and other media outlets reported yesterday. The Biden administration has disputed that her departure is imminent (Climatewire, April 14).

McCarthy’s looming departure comes at a critical juncture for Biden and his climate aspirations. The next few months could prove vital to those efforts, especially on Capitol Hill, say White House allies and environmentalists.

Much of Biden’s climate agenda remains stalled in Congress, despite Democratic control of both the House and Senate. International efforts to confront global warming aren’t advancing as fast as scientists recommend. And the Supreme Court appears poised to handcuff EPA’s ability to enact climate change regulations that can cut carbon emissions.

Adding to that pressure is the usual push-and-pull of U.S. politics. Republicans this fall are threatening to capture the House, Senate or both. Under that scenario, Biden would have a much tougher time advancing his climate agenda.

“I think the Biden administration is in a really tough spot because they have had most of their domestic climate agenda stalled,” said Jean Su, a director for energy justice at the Center for Biological Diversity. “So it may just be a good time for her to pass to the next chapter given the one year they had to effect change is coming to a close.”

Biden ran for president on a platform that promised to spend more than $2 trillion on a climate policy that sought to cut greenhouse gas emissions and build a future where people would charge their electric vehicles from renewable energy sources on an electric grid.

“At the end of the day, the story of the first couple years of the administration is going to be written on whether he could make good on the promise that is embedded in those massive investments, and the story is still out on that,” Podesta said.

Now the clock is winding down on what could be Biden’s last year working with Democratic majorities in both the House and Senate. It’s Democrats’ last, best chance to enact green energy tax credits and other incentives that can help bend the curve on U.S. climate emissions and support more rigorous regulations — or make up for the lack of them.

A top contender to replace McCarthy is her deputy, Ali Zaidi — though environmental groups that frequently speak with the White House say that’s far from a done deal.

Zaidi worked on energy policy in the Obama White House Office of Management and Budget, at private law firms and, most recently, in former New York Gov. Andrew Cuomo’s office. He’s garnered pushback among some environmentalists for his past connections to oil and gas and Republican politics (Climatewire, Dec. 4, 2020).

Since assuming her role as Biden’s domestic climate policy lead last year, McCarthy has overseen the construction of a new Paris Agreement pledge to cut greenhouse gas emissions by 50 to 52 percent compared with 2005 levels by 2030.

She has led an interagency task force devoted to integrating climate planning and mitigation into a wide variety of government activities. The former EPA administrator also has been seen to influence that agency’s early regulations — a fact that has drawn the ire of top Republicans on Capitol Hill, including Senate Environment and Public Works ranking member Shelley Moore Capito (R-W.Va.).

In her statement explaining why she opposed the nomination of Michael Regan to be EPA chief, Capito said her “greatest concern” about his leadership was “the probability that unaccountable climate czar Gina McCarthy and other Obama-era officials will be the ones calling the shots.”

McCarthy and her White House team also shaped the climate components of Biden’s “Build Back Better Act” that passed the House last year — though she’s now seen as playing a supporting role in ongoing efforts to secure Senate passage of some of its core elements, such as renewable energy tax credit extensions.

Some of the Biden administration’s allies in the environmental movement see much to celebrate from the president’s first year in office and give McCarthy part of the credit, especially for interagency coordination and engaging outside stakeholders.

“I see her as a person who has been the orchestra conductor in trying to get all the different pieces playing off the same sheet of music, in terms of advancing as many different policies as possible,” said Elizabeth Gore, senior vice president for political affairs at the Environmental Defense Fund.

As the Biden administration enters its sophomore year, the most ambitious parts of the president’s climate plan face an uncertain future at best. At worst, they’re in danger of creating a legacy of climate failure at the very moment scientists have said a rapid decarbonization is critical to prevent the worst effects of global warming.

The “Build Back Better Act,” the sprawling climate and social spending package Democrats hoped to move through the Senate via a budget maneuver, has stalled. While the White House climate office helped develop that bill, White House National Economic Council Director Brian Deese and others are in charge of negotiations aimed at getting it unstuck.

Deese traveled to West Virginia last month with Interior Secretary Deb Haaland and Energy Secretary Jennifer Granholm, where he met with Sen. Joe Manchin (D-W.Va.), the chief holdout on the bill. The moderate Democrat has projected some interest in its climate provisions, especially tax incentives.

Jamal Raad, co-founder and executive director for Evergreen Action, said McCarthy should spend the remainder of whatever time she has left focusing on getting Congress to pass a bill that delivers clean energy tax credits along with other climate priorities that were in the now-defunct “Build Back Better Act.” Beyond that, her best option is to rely on governmental regulatory powers, he said.

“The biggest thing beside the investment package is the aggressive use of the Clean Air Act and the executive authorities that EPA has,” he said.

Yet if Biden administration officials are making progress on their climate objectives — which allies say is happening — they have been tight-lipped about it.

The bold climate promises of the Biden presidential campaign barely got a mention in his State of the Union speech. Since the start of Russia’s war on Ukraine, the administration has shifted some in its focus — going so far as to threaten to penalize oil producers sitting on unused leases (E&E News PM, March 31).

Asked about McCarthy’s status, White House spokesperson Vedant Patel described as “wrong and not true” the reports that McCarthy was leaving. “We have no personnel announcements to make,” he said. “Gina and her entire team continue to be laser-focused on delivering on President Biden’s clean energy agenda.”

The White House would not make McCarthy nor Zaidi available for an interview, despite months of requests.

McCarthy wrote in a Twitter post late last night that reports that she had resigned her position were inaccurate. “We’ve made great progress these past 14 months, but we have much more work to do — and I remain excited about the opportunities ahead,” she added.

Speaking on background, a White House spokesperson pushed back on the idea that the administration was at an inflection point for Biden’s climate goals. “We believe we can walk and chew gum because families need to take their kids to school and go to work, get groceries and go about their lives — and sometimes that requires gas today, this month and this year,” the spokesperson said. “But at the very same time we must speed up — not slow down — our transition to clean energy.”

While much of the administration’s response to the war in Ukraine has been to boost fossil fuel supply to compensate for lost access to Russian gas — particularly for U.S. allies in Europe — environmentalists say the administration has had its eye on the longer-term objective of weaning the U.S. economy off fossil fuels altogether.

“I think there is, given what’s happening in Ukraine, a renewed focus on energy policy. And part of that conversation is a focus on the large climate investments that made it through the House,” said Christy Goldfuss, senior vice president for energy and the environment at the Center for American Progress.

Biden this month did issue a first-of-its-kind directive under the Defense Production Act to incentivize the production of five metals used in high-capacity batteries for clean energy products.

Goldfuss, who served as managing director of the White House Council on Environmental Quality under Obama, said that while climate for its own sake has become less central to the administration’s message since Russia invaded Ukraine, the conflict has catapulted energy to the top of its agenda.

“And you can’t look at the energy picture of the United States without talking about clean energy,” she said. “That’s just impossible at this point.”

There also isn’t universal agreement that most of the climate provisions in the “Build Back Better Act” can’t be salvaged in some form — though time is running out. Observers said McCarthy would be expected to stay at least until those provisions made it across the finish line — which, they said, would need to be before Congress left for its Fourth of July recess.

While there have been few outward signs that negotiations between Manchin and the Biden administration are bearing fruit, one lobbyist said that silence could be a positive sign. Negotiations over the bill last year played out in the media and ended with deadlock and recriminations after Manchin pronounced the bill “dead” and walked away.

“I think they’re doing a better job this time of keeping their mouths shut, which is useful,” said the lobbyist, who asked to talk on background in order to speak candidly.

While she’s seen to have had a hand in shaping Biden’s legislative agenda on climate change, the majority of McCarthy’s focus has been on the executive branch and on interfacing with outside interests, from industry to labor.

“My sense is they have had to retool to focus more on the executive branch,” said David Hart, a George Mason University professor who served in the Obama White House science office.

Hart noted the administration has made progress on climate regulations, such as vehicle emissions standards, but said there is more work to be done in the executive branch, including on implementing the infrastructure law, which he called a “huge lift.”

Environmentalists also acknowledge that McCarthy likely had a role in influencing Biden’s early EPA proposals, though they stressed that Regan is running the agency.

“Having her leadership there in the White House as a veteran of all of those EPA actions of the Obama years is certainly a great resource,” said Mary Anne Hitt of Climate Imperative.

EPA is due to release a supplemental proposal and then final rules on oil, gas and methane in the coming year — as well as long-awaited carbon rules for new and existing power plants. Regan previewed the latter last month at an energy conference in Houston, which would take the place of rules McCarthy had a role in designing during the Obama administration.

“I think she’s an important part of the team for this chapter of their climate agenda,” Hitt said.