How long will Biden’s climate Cabinet stick around? 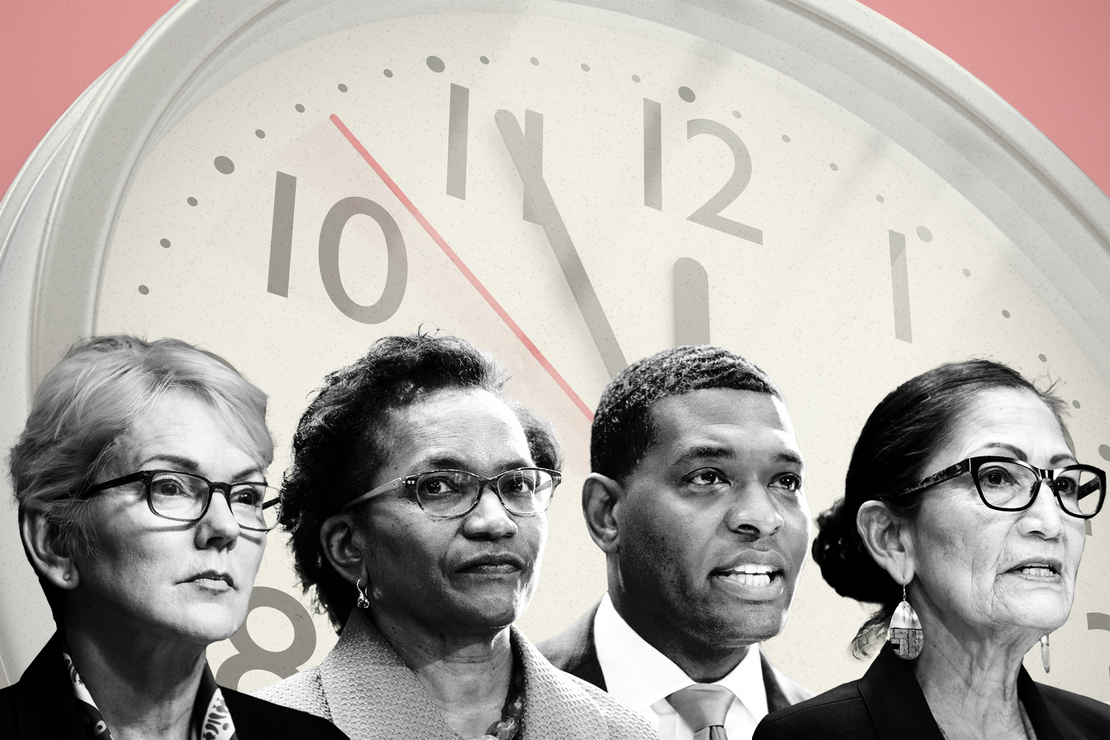 It’s a question energy and climate insiders are quietly discussing ahead of an election that could tilt partisan power on Capitol Hill. If Republicans win control of either chamber of Congress, it would dramatically change the day-to-day jobs of top Biden administration officials, who would be forced into defensive mode by congressional Republicans eager to call them in for hearings and target their climate policies.

“It wouldn’t be a lot of fun to run an agency if it’s going to be pilloried for the next two years,” said William Reilly, who served as EPA administrator during the George H. W. Bush administration.

“On the other hand,” Reilly added, for senior Biden officials who want to help oversee the rollout of massive climate and infrastructure legislation, “I can well imagine someone convincing himself or herself that it makes sense to stick around and limit the damage.”

That was unusual, but other recent presidential administrations have also seen some Cabinet turnover during their first two years on the job, according to an analysis by Kathryn Dunn Tenpas of the Brookings Institution.

Here’s a look at how long past environmental officials have stayed on the job:

Congressional Democrats would have loved to haul Trump Interior Secretary Ryan Zinke in for oversight hearings after they took control of the U.S. House in January 2019.

But Zinke didn’t give them the chance.

He left his job on Jan. 2, 2019, the day before Democrats claimed the gavels they had won in the midterm elections the previous November. The Interior secretary’s departure came as he faced allegations that he violated ethics rules and abused his office and as Democrats in Congress vowed relentless oversight of the Trump administration.

President Barack Obama’s first Interior secretary, Ken Salazar, stayed in his job for more than four years, including more than two years after Republicans gained control of the House in early 2011.

Interior’s press office did not respond to a request for comment about how long Secretary Deb Haaland plans to remain on the job.

Congressional Republicans hope to grill Haaland on the Biden administration’s oil and gas policies, among other things, if they clinch gavels in Congress (E&E Daily, Sept. 29).

Trump EPA Administrator Scott Pruitt left office well before congressional Democrats took over control of the House. Pruitt — who also faced numerous ethics investigations when he resigned under pressure in July 2018 — was one of the shortest-tenured EPA administrators in recent history.

George W. Bush’s second EPA administrator, former Utah Gov. Mike Leavitt, was similarly only on the job for a little over a year. He left EPA in 2005 when Bush picked him to lead the Department of Health and Human Services.

Obama EPA leader Lisa Jackson is the longest-serving EPA administrator in the past two decades. She served the entirety of Obama’s first term, including two years after Republicans gained control of the House and made her agency one of their top oversight targets. She also stayed on for more than a year after the White House publicly undercut her agency’s attempts to install tougher regulations on smog.

Biden EPA Administrator Michael Regan has been on the job since he was confirmed in March 2021.

“In nearly two years of serving President Biden and the American people, Administrator Regan and EPA have made unprecedented progress to tackle the climate crisis, deliver environmental protections for all people, invest in water infrastructure, and supercharge our clean energy economy," Regan spokesperson Tim Carroll said in an email. "Administrator Regan is proud of the progress we’ve achieved already and looks forward to continuing to advance this Administration’s historic climate and environmental agenda.”

Republicans are eager to launch investigations into EPA if they flip the House, the Senate or both (E&E Daily, Oct. 19). If the GOP wins control of the Senate, Republicans could complicate Biden’s efforts to replace any Cabinet or Cabinet-level officials who step down.

Obama Energy Secretary Steven Chu is the longest-serving leader of that department in the past two decades. He served from early 2009 until April 2013, remaining on the job for more than two years after Republicans took control of the House.

At one point in 2011, lawmakers grilled Chu for about five hours during a GOP-led hearing on Solyndra, a solar company that received a loan guarantee from the Obama administration before the company declared bankruptcy.

Trump’s first energy secretary, Rick Perry, stayed at his job longer than some of his colleagues who worked on energy and environmental issues. Trump picked the former Texas governor to lead the department Perry had said he wanted to abolish, although he later said he regretted that statement. He stuck around until December 2019, after nearly three years on the job and after one year with Democrats in charge of the House.

Reports emerged in October 2019 that Perry planned to step down by the end of the year (Energywire, Oct. 4, 2019). Prior to his departure, Perry refused to comply with congressional Democrats’ subpoena seeking records related to Trump’s first impeachment.

Biden’s Energy secretary, Jennifer Granholm, has served in her role since February 2021.

Nearly every day, her schedule includes a number of “days left" reflecting the number of business days until the end of Biden’s term on Jan. 20, 2025, according to her calendars obtained under the Freedom of Information Act (Energywire, Sept. 21).

Granholm “is honored to serve in the Biden-Harris Administration working day in and day out to bring down energy costs for American families, create jobs for American workers and deliver healthier air for the American people through an equitable clean energy transition,” DOE spokesperson Charisma Troiano said in an email. “Under President Biden, the Department of Energy is helping the nation lead on the global competitive stage and Secretary Granholm looks forward to serving the President and the American people.”

Each of the past four presidents has had only one Senate-confirmed chair to lead the Council on Environmental Quality. The job isn’t Cabinet-level, but it is one of the key environmental posts in the executive branch.

James Connaughton served on the job from June 2001 — the first year of George W. Bush’s administration — until the Obama team took over in January 2009.

Trump was on the job for about a year and a half before he nominated a CEQ chair. Mary Neumayr, who had been leading the office as its chief of staff, was confirmed as chair in January 2019, two years into Trump’s term.

Asked about Mallory’s career plans, CEQ spokesperson Alyssa Roberts said in an email, “President Biden has made tackling the climate crisis, advancing environmental justice, and conserving our lands and waters a top priority. Chair Mallory is honored to serve the President and excited to continue the administration’s work toward healthier air, cleaner water, and more sustainable communities for all.”