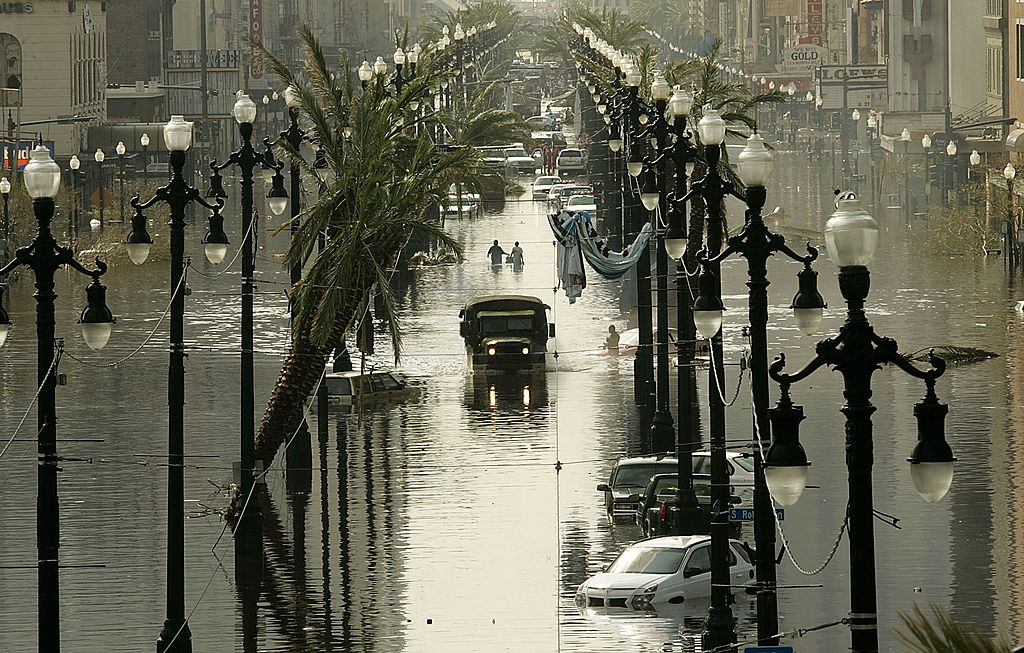 A Louisiana commission today approved New Orleans flood control funding it had been refusing to support over city officials’ opposition to the state’s strict abortion ban.

Citing the abortion issue, Louisiana Attorney General Jeff Landry (R) had twice successfully convinced the State Bond Commission to delay approval of a future $39 million line of credit for a power station to run New Orleans drainage pumps that would protect the city’s 384,000 residents from flooding.

But on Thursday, commission members had clearly run out of patience with Landry, voting 11-1 to approve the future line of credit for the project.

“Any flood protection anywhere in this state should not be held up for any reason,” Lt. Gov. Billy Nungesser (R) said.

Louisiana’s abortion ban does not include exemptions for rape or incest and has forced abortion clinics to close throughout the state, including in New Orleans, where city officials were quick to raise their opposition to the law in July. There, the City Council passed a resolution this summer asking police, sheriff’s deputies and prosecutors not to make enforcing the ban a high priority, and New Orleans police officers have since been directed to investigate alleged abortions and write reports about them but not to issue summons or make arrests.

That has enraged Landry, who has told the State Bond Commission it must withhold funding from New Orleans as a way to punish officials there (Greenwire, Aug. 19). The commission’s acquiescence to those demands last month in a 7-6 vote led to a public outcry that the state would hold up funding for flood relief and apparently caught the attention of the commission’s members.

Nungesser said that his representative had voted to withhold the funding at the previous two meetings without his knowledge or approval and that he was intending the commission meeting in-person “to change the previous two votes.”

Noting that he disagreed with the New Orleans mayor and City Council, Nungesser argued that the State Bond Commission was not an appropriate venue to punish the city for its abortion stance.

“Take it up in the courts and not here interrupting flood protection at a time when our insurance rates are through the roof,” he said. “File a suit if he thinks the laws are broken, but that’s not for this commission.”

Other members agreed, with State Treasurer John Schroder telling Landry’s representative at the meeting that if New Orleans has violated the law, “please go do something about it.”

“Because this is not the place to handle it, it just isn’t,” he said.

Landry himself did not attend today’s hearing, sending Civil Director of the Louisiana Department of Justice Angelique Freel to represent him. She argued that withholding the funding would not actually cause more flooding in New Orleans because approval of the future line of credit would not immediately release funds for the project, which is needed to provide reliable electricity to pumps to keep city streets dry during rainstorms. Rather, approving the line of credit puts the project forward for the Legislature to actually fund in its next appropriations bill.

“This is not going to harm hurricane protection, but what it is going to do is it is going to send a message that we expect all municipalities to abide by the laws that are passed by this body, the Legislature,” she said.

But when the commission voted on approving the line of credit, the flood project was just one of seven infrastructure projects across the state totaling more than $590 million in funding it considered simultaneously. When Freel objected to the vote, commission members were quick to point out that she was putting funding for other communities at risk, too.

“Just to be clear,” State Senate President Page Cortez (R) said, “Many of these projects are underway and would be delayed if they don’t get their funds.”

State Sen. Bret Allain (R), who chairs the Revenue & Fiscal Affairs Committee, also noted that if the State Bond Commission did not approve the future line of credit this year, his committee would not be able to actually fund the project next year, meaning project construction would ultimately be delayed. He also noted that Legislature rules require lawmakers to consider different types of funding in a specific order, so holding back approval of the New Orleans future line of credit could have ramifications for projects throughout the state.

“We need to quit messing around with this and go ahead and approve it,” he said. “It’s time to get this out of the way.”