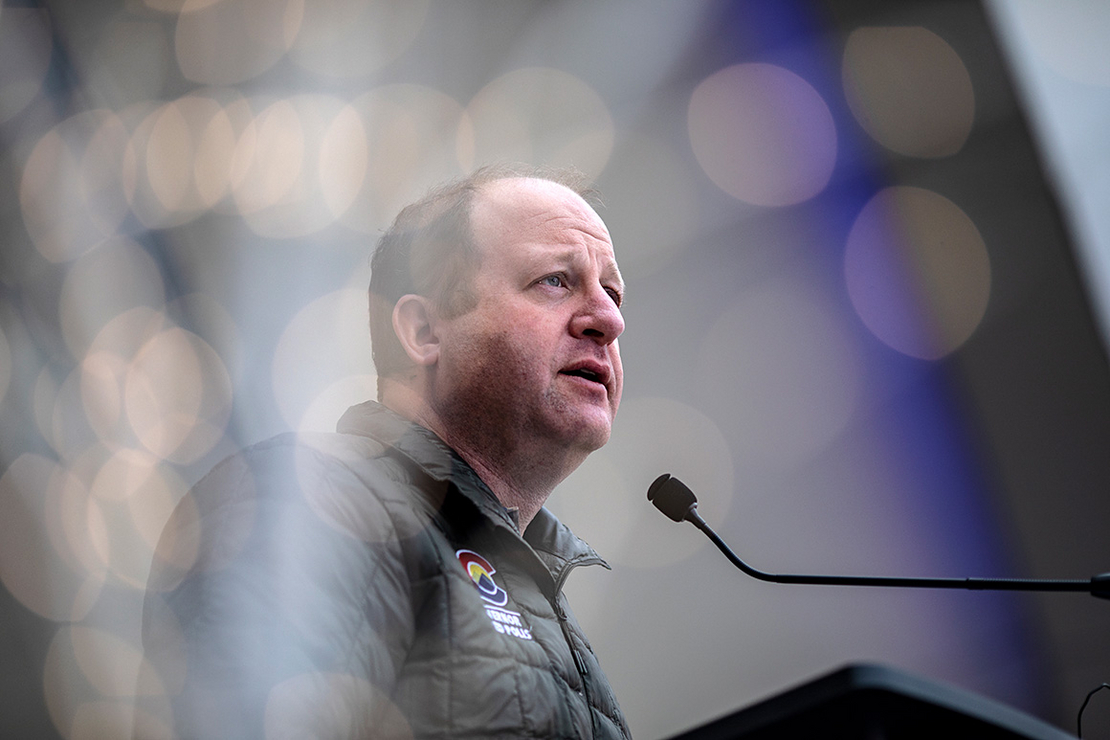 DENVER — When Colorado Democratic Gov. Jared Polis signed a sweeping overhaul of Colorado’s oil and gas law three years ago, he declared that the state’s “oil and gas wars are over.”

Supporters and opponents of drilling have scoffed at the notion that the law, which toughened the state’s approach to drilling and enacted provisions such as a gas-flaring ban, ended the bitter fight about production. After all, skirmishes continue as environmentalists and neighborhoods seek to block drilling projects in the suburbs (Energywire, Nov. 4).

What has ended are the statewide referendums proposed by environmentalists to impose restrictions the industry considered crippling. Prior to the law, environmental groups tried four times to put measures to a vote, succeeding once in 2018. Voters rejected it. But no such measures have appeared on the ballot since the law passed.

Perhaps more importantly, the drilling restrictions in the new law aren’t a campaign issue as Polis aims to win reelection this week, despite surging gasoline prices and voter worries about inflation. Polls show him ahead by more than 10 points, and Larry Sabato’s Crystal Ball considers rates the race “Safe Democratic.”

“Frankly, Polis is in a pretty strong position,” said Dick Wadhams, a former Colorado Republican Party chair and longtime party strategist, although he added that Democrats may be underestimating support for the industry among Colorado’s Hispanic voters in the long term. This year, that would likely register in other races, such as a hotly contested House race (Climatewire, Nov. 1).

Politically, Colorado has moved on, a sign of what the oil and gas industry could expect from climate-friendly blue state governments. And growing acceptance of the new rules from industry hints that new environmental regulations aren’t always the political third rail that opponents make them out to be.

“We still have an oil and gas industry in our state,” said Mike Foote, who co-authored the new law when he was a state senator. “They’re still making a boatload of money. They still employ a lot of people.”

Industry leaders say that after a rough transition, the pace of oil and gas permitting has picked up, and a sense of normalcy has returned.

"I understand why the rules are now in place," said David Keyte, chair and chief executive of Caerus Oil and Gas LLC, a Denver-based producer with operations in Utah and western Colorado. "The governor and the commission have done a great job."

The state's biggest producer, Occidental Petroleum Corp., says it expects to add a second rig for drilling wells next year, after dropping to one earlier this year after the Colorado Oil and Gas Conservation Commission rejected a key permit.

Under the new law, commonly known by its legislative designation SB-181, permit applications take longer to finish and face more opposition. Oil companies are adapting to new suburban realities in the eastern part of the state and shying away from populated areas.

But they aren't worrying about ballot measures like Proposition 112 that environmental groups got on the ballot in 2018, after two previous attempts fell short. Industry groups said it would have put 85 percent of state and private land off-limits to drilling.

"Gov. Polis has proven that oil and gas issues have now shifted to be the work of the Commission (COGCC), under SB-181, rather than competing ballot initiatives," said Polis spokesperson Conor Cahill. "The increased certainty has boosted stability and investment in Colorado."

The shale boom started around 2010, when most states where drilling bloomed were under full or partial Republican control. States, not federal or local officials, are the main regulators of drilling and hydraulic fracturing, known as fracking.

In many of those states, legislators for years stepped in when cities tried to ban or rein in fracking, passing statewide measures to override the restrictions (Energywire, June 1, 2015) .

The same tensions grew in Colorado, which is home to some of the most intense mixing of oil and gas with suburban development (Energywire, Nov. 5, 2014). Indeed, When a Denver suburb tried to ban fracking in 2014, the state filed a lawsuit (Energywire, July 25, 2014).

The Democratic governor at the time, John Hickenlooper, is now one of Colorado's two U.S. senators. Hickenlooper, a former oil company geologist who once drank fracking fluid to vouch for its safety, was more sympathetic to oil and gas interests than most Democrats today (Energywire, Jan. 2, 2020). Hickenlooper agreed to some increased regulation of oil and gas, primarily making Colorado the first state to enact restrictions on methane emissions from wells.

Those policies were cast primarily as part of efforts to fight climate change rather than protecting suburbanites from fracking rigs (Climatewire, July 22, 2020).

'A friend to industry'

Polis, a wealthy tech entrepreneur, has a different history with drilling and fracking. Concerns about the problems of oil production have been woven into his political identity since 2013 when he complained he'd "been fracked" when a rig showed up next to his rural weekend getaway. The company involved said its operation was completely legal.

In 2014, when serving in Congress, he challenged the more industry-friendly outlook of Hickenlooper, the then-governor, by threatening to support ballot measures with tough new restrictions for the industry (E&E Daily, April 17, 2015). The campaign was dropped after Polis and Hickenlooper hammered out a compromise.

Environmentalists tried again in 2016 to get a statewide referendum for oil and gas restrictions. They finally succeeded in 2018, when Polis was also on the ballot in his first run for governor. The proposed new rules lost. Polis won.

Five months later, he signed SB-181, which ended routine flaring, gave local governments more power over drilling and changed the mission of the state's oil and gas regulator. Industry has chafed at many of the restrictions, most vehemently a 2,000-foot buffer zone imposed by COGCC between new wells and homes.

The campaign of Polis's Republican opponent this year, Heidi Ganahl, did not respond to a request for comment. But she has criticized Polis for backing the drilling law even when the 2018 referendum failed.

"We need to remind Polis that Coloradans voted down a 2500 foot setback for drilling," Ganahl wrote on Facebook early this year. But criticism of the law has not featured prominently in her campaign. She has focused on crime, school choice, cost of living and a plan to abolish the state's income tax.

The law has played a more prominent role in the hotly contested race for a House seat representing Denver's northern suburbs and the agricultural center of Greeley, a district where much of the state's oil drilling takes place. Still, national issues such as abortion and the economy have played a prominent role in the district, which was drawn to be highly competitive.

The Democratic candidate, state Rep. Yadira Caraveo, was a co-sponsor of the legislation at the Capitol. The Republican in the race, state Sen. Barbara Kirkmeyer, rejects climate science and strenuously backs the oil and gas industry. Kirkmeyer and national Republican groups have spent about $2.6 million on television ads attacking Caraveo on energy issues, according to an E&E News analysis of data from AdImpact.

Kirkmeyer blames the law for job losses in the state's drilling industry, though employment data shows Colorado's oil and gas employment has followed the same patterns as other states such as Wyoming and North Dakota.

"Oil and gas will push some voters who would have otherwise voted Democratic to vote Republican" in the district, Wadhams said.

Caraveo, though, calls the legislation “a very moderate bill that we worked with the oil and gas industry on.”

But the idea that it ended the "oil and gas wars" makes some shake their heads.

"That is in fact not the case," said Lynn Granger of the American Petroleum Institute Colorado. "What has been happening is the goal posts keep moving."

Polis's record on oil and gas has not endeared him to a central part of the Democratic base: environmentalists. Distrust goes as far back as his 2014 deal to take drilling measures off the ballot, and some are still stinging from the governor’s moves in 2021 to kill a climate bill giving the state's air quality commission more power (Climatewire, May 7, 2021). They see in Polis a pro-business streak that prevents him from doing what it takes on climate change.

"Polis has truly been a friend to industry," Kate Christensen, Beyond Fracking collaborator with 350 Colorado, said in an email exchange. "And they can't even see it because he's in the Democratic Party."

If Polis defied the will of the voters, as Republicans maintain, those voters aren't punishing him for it.

Veteran conservative columnist George Will even touted Polis for president. Will, though, made no mention of Polis' energy policies. He focused instead on what he saw as fiscal prudence and support for charter schools. Polis has consistently dismissed talk of higher office.

This year, industry leaders backed off trying to put measures to a statewide referendum once they determined green groups wouldn't run their own. So Polis is on the ballot once again, but drilling is not.