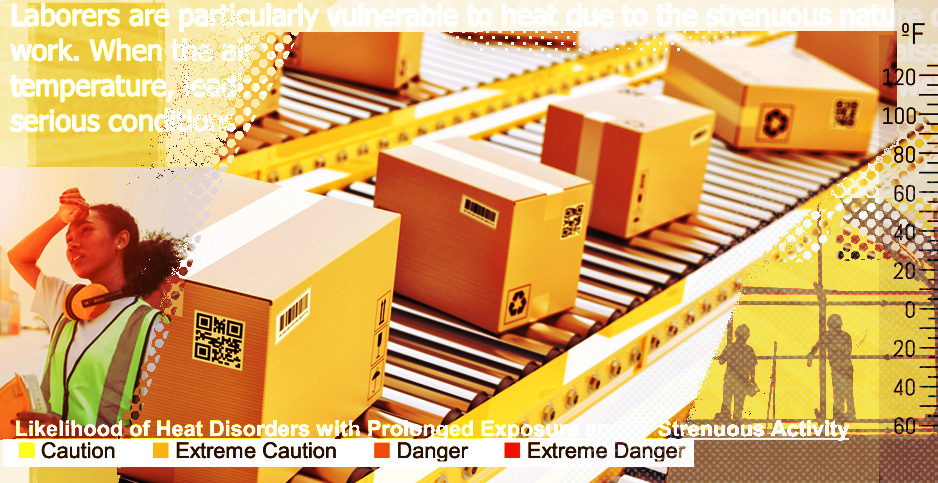 Both the Occupational Safety and Hazard Administration and the U.S. Attorney for the Southern District of New York have open investigations into the e-commerce giant for workplace safety hazards and have inspected warehouses in New York, Illinois, Idaho, Colorado and Florida. News reports suggest that, so far, the probes are focused on Amazon’s record-keeping about injury and illness, as well as its ergonomics program and powered industrial truck operations.

But those investigations could easily expand to examine potentially dangerously high temperatures in warehouses due to a new effort by OSHA this summer to target workplaces with heat-related hazards.

Amazon has long been plagued by complaints that its warehouses are too hot, and the criticism is well documented. At one Allentown, Pa., facility in particular, worker complaints about temperatures topping 100 degrees prompted two OSHA inspections in the summer of 2011. The Morning Call, the local newspaper, documented them in an investigation that was picked up by national outlets at the time and has since been cited in stories about other safety hazards at Amazon facilities.

More recently, Amazon workers walked out of the company’s largest air freight facilities on the West Coast demanding pay raises and protection from high temperatures inside the warehouse.

Multiple workers told E&E News that they still swelter in warehouses, particularly this summer as much of the nation was under heat advisories.

“Honestly speaking, it feels like a sweat box,” said one worker at a Massachusetts warehouse who requested anonymity to protect his job. “Numerous people have fainted or been on the verge of fainting because of the heat.”

Though the OSHA investigation into Amazon may not have begun over concerns about heat, the agency has a new so-called national emphasis program for heat this summer that could cause it to expand its Amazon probe.

Under the program, OSHA compliance officers have been instructed to investigate any heat-related complaints that come in this summer and to conduct unannounced inspections specifically to check work sites for heat-related hazards.

Perhaps most relevant to Amazon: under the program, compliance officers inspecting work sites for other reasons must address any other hazards that present themselves during site visits.

“As the nation experiences wide-ranging heat waves, heat hazards are more likely to present themselves during an inspection, even if that inspection was not initiated by a heat complaint,” she said.

OSHA’s heat emphasis program comes as the agency has been working on a new regulation specifically to protect workers from heat. Without such a rule, the agency for years has relied on its so-called “general duty clause,” which broadly requires employers to ensure workplaces are safe from “recognized hazards.”

Pursuing bad actors has been challenging in recent years due to a key decision made an official with ties to Amazon.

Back in 2019, OSHA’s ability to pursue heat cases under the general duty clause was seriously weakened in a ruling by the OSHA Review Commission, which jettisoned penalties levied against an Ohio roofing company when an older worker with a preexisting condition died.

The commission agreed with arguments from roofing company A.H. Sturgill Roofing Inc. that because the company did not know about the worker’s heart condition — or that it could make him more vulnerable to heat — it couldn’t be responsible for his death.

That ruling has since been cited in challenges to citations OSHA has issued over heat. It was authored by then-Commissioner Heather MacDougall just two months before she took a job as Amazon’s vice president for worldwide workplace health and safety, earning a $160,000 base starting salary supplemented with a signing bonus and stock options. Records obtained under the Freedom of Information Act show MacDougall was approached by Amazon five months before the heat decision was issued, and the e-commerce giant even flew her to Seattle for an interview just two months before she issued the February 2019 decision (Greenwire, Jan. 22, 2021).

“The reality is, that decision made it much more difficult for OSHA to use the general duty clause to go after heat hazards,” said Juley Fulcher, a worker health and safety advocate at Public Citizen. Though MacDougall’s involvement in the ruling so close to moving to Amazon may not constitute a formal conflict of interest under federal ethics rules, Fulcher said that “it’s always problematic when you have people on the OSHA Commission whose primary goal may be more along the lines of protecting employers rather than employees.”

Amazon did not comment when asked about MacDougall’s involvement in the ruling, nor did it respond when asked to comment on the ongoing OSHA investigation into worker safety at its warehouses.

But in a broad statement, Amazon spokesperson Maureen Lynch Vogel said, “The health and safety of our employees is always our top priority, and we have robust safety protocols and more than 8,000 safety professionals who work every day to support our teams.”

She described the company as “one of only a few companies in the industry” to have installed climate control systems in fulfillment centers that “constantly measure the temperature in our buildings,” she said. The company provides fans “for additional comfort.”

But multiple Amazon warehouse workers who spoke to E&E News said the company does not do enough to protect them from heat. For example, they said, if their fulfillment centers do have air conditioning, it is either not turned on days when it is hot or not strong enough to prevent the temperature inside the warehouses from becoming unbearably hot.

The worker at a Massachusetts fulfillment center said his coworkers routinely go to the bathroom when they get overheated because Amazon’s health and safety officers often doubt workers who complain of the heat.

Workers also distrust watering stations placed throughout the facility, he said, because the water they dispense looks dirty. On a recent day when it was nearly 100 degrees outside, the worker said he asked an on-site health and safety officer to distribute bottled water but was told that Amazon rules prevented the manager from giving out bottled water if indoor temperatures did not exceed 85 degrees. The manager did not take the temperature indoors when refusing to provide water, the worker said.

“We should be able to live a decent life and not run the chance of dying at an Amazon warehouse because of the heat or lack of hydration,” the worker said.

Asked about this specific incident, Lynch Vogel at Amazon said the company ensures “everyone working in our facilities has easy access to water every single day, not just during periods of excessive heat,” and noted the water stations located throughout the buildings.

“Employees are encouraged to take breaks as needed to hydrate,” she said.

Another worker at a fulfillment center in Illinois, who requested anonymity out of fear for her job security, told E&E News that her coworkers have gotten sick drinking from the watering stations. Instead, she said, they buy their own bottled water from vending machines in the break room, and many don’t hydrate as well as they should because walking to the break room could take time away from their work, which comes with strict quotas for how many boxes they must move and orders they must fill.

The worker said she suffers from asthma and hypertension, which are easily exacerbated by heat, and has had to leave work “several times” during heat waves this summer. In one case, she said, she went to Amazon’s on-site emergency clinic, known as AmCare, with blood pressure so high she was feeling dizzy and nauseous. After 15 minutes of rest, AmCare told her it was time to return to work.

The worker refused, opting instead to use unpaid personal time she usually saves for the holiday season, when Amazon workers have longer hours and higher quotas, to avoid returning to work while feeling unwell.

“Amazon is so obsessed with customer happiness that they are forgetting about their workers. They are putting us in unsafe places and not caring about our health and safety as much as they care about getting the packages out and getting their money,” she said.

Federal prosecutors have been asking current and former Amazon employees to report information about their working conditions with an online questionnaire. The survey does not specifically ask about heat-related problems, but it does ask whether Amazon discourages workers from getting medical treatment for injuries. It also asks: “Is there anything you would like to tell us about AmCare?”

Fulcher of Public Citizen noted that Amazon warehouses have long been notorious for high injury rates that can come from people working quickly for extended hours.

“That many people working at that high speed without the opportunity to take adequate breaks — it’s just waiting for injuries under those circumstances,” she said.

The same conditions that make accidents more likely to happen also make workers more vulnerable to heat-related illnesses, as their bodies are unable to cool themselves down when they are doing intensive labor.

Fulcher said she believes that OSHA won’t be able to avoid looking at how Amazon handles heat as it inspects its facilities for other potential workplace safety violations.

“If they have not already started looking specifically at heat, they should be looking into it,” she said.