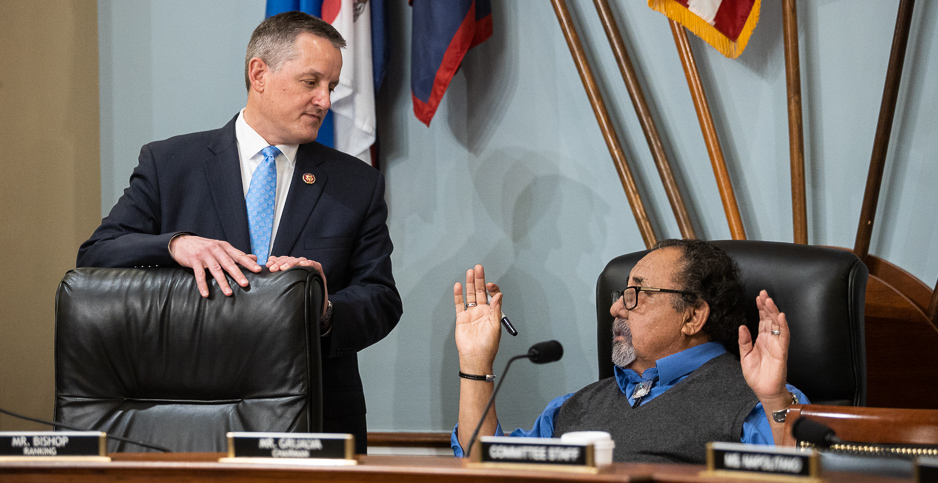 The House Natural Resources Committee will be the first panel to consider a component of the $3.5 trillion reconciliation package — a distinction Chair Raúl Grijalva takes seriously in the thick of a deeply partisan political atmosphere.

“We’re one of the first committees to go, and we want to set the tone that this is about doing our work and doing the business that we’re elected to do, so we’re gonna do it,” the Arizona Democrat told E&E News in an interview yesterday.

But Grijalva has already been warned that the markup, scheduled for tomorrow morning, could quickly go off the rails. Committee Republicans, who oppose the entire reconciliation process as an exercise in reckless spending for liberal causes, are raging over the Natural Resources panel’s roughly $31 billion draft bill.

On Monday night, they called on Grijalva to postpone proceedings out of respect for a litany of other crises Congress should be tackling first, like relief for Hurricane Ida-ravaged Louisiana (Greenwire, Aug. 31).

Yesterday, they laid out their complaints in a series of tweets, maligning committee Democrats for touting legislation that would, among other things, help fund the Civilian Climate Corps — a green jobs training and placement program the GOP called an “arcane work program under the guise of conservation” that is “irresponsible when Main Street can’t find employees.”

They slammed the bill’s funding for the Presidio Trust, the public-private trust that administers San Francisco’s national park of the same name and has been a longstanding priority for House Speaker Nancy Pelosi (D-Calif.). Republicans called this line item among the “slush funds for partisan pet projects” and affixed it with the hashtag “#PelosiPresidioPayout.”

And they took offense to provisions that would institute “arbitrary drilling moratoriums” and “increase fees and royalties on … oil and gas production,” thereby “threatening long-term energy security, and potentially putting more Americans out of work.”

A spokesperson for ranking member Bruce Westerman (R-Ark.) told E&E News today that Republican committee members were beginning to write up amendments to the legislation, with staff anticipating they could end up submitting the most amendments filed during a Natural Resources Committee markup this year to date.

“As you might imagine, our members are fired up about this legislation,” the spokesperson, Rebekah Hoshiko, said in an email.

Grijalva will also have to contend with Senate Democrats, who are due to produce a reconciliation measure that diverges in meaningful ways from that of Democrats in the House.

The “courtesy calls” to Senate Energy and Natural Resources Chair Joe Manchin (D-W.Va.) and others, Grijalva said, would be happening over the coming days. Grijalva said the calls would be a chance to connect on a shared jurisdictional responsibility but also an opportunity to “let them know … where we think the shortfalls are.”

Grijalva explained he was referring to where the Senate could have shortfalls in its own reconciliation measures, or where the House and Senate bills could differ and cause problems when it comes time to merge both versions in a conference committee.

But Grijalva wouldn’t get into specifics, citing the sensitivity of negotiations even among members of the same party.

For starters, Manchin’s committee is authorized to spend as much as $198 billion to meet its reconciliation instructions, but much of the panel’s work will be focused on the Energy Department — which in the House overlaps with the Energy and Commerce Committee.

To that end, Senate Energy and Natural Resources will be drafting the clean electricity payment program — also known as a clean electricity standard — as well as consumer rebates for weatherizing homes, boosting production of clean energy and auto supply chain technologies, and infrastructure research for DOE’s national laboratories.

Both Manchin and Grijalva will be leading their members in oversight over Interior Department programs, which will have a heavier focus in Grijalva’s reconciliation bill.

However, the ideological makeup of both committees will come into play in negotiating the overlapping Interior provisions. Democrats on ENR tend to be more moderate than their counterparts on Natural Resources. Manchin is himself a moderate Democrat and a critical swing vote for reconciliation in a 50-50 Senate. This could spell trouble ahead for many of Grijalva’s progressive priorities.

For starters, Manchin twice voted to allow drilling in the Arctic National Wildlife Refuge when the former GOP majority used a 2017 reconciliation process to finally open the refuge for leasing. At that time, Manchin said he supported states’ ability to develop their own resources.

It’s not clear now how Manchin will respond to language in Grijalva’s bill undoing the 2017 provision to restrict ANWR drilling entirely. Environmental groups say the Senate chairman was aware of the lobbying effort to include the repeal in reconciliation, but Manchin has not yet offered a position (E&E Daily, Aug. 25).

In addition, Democrats on ENR tend to hail from Western states, which may color their views on other issues at play in reconciliation. Those issues include hardrock mining reform and wildfire policies, as well as proposals in the House draft bill to overhaul the royalty, leasing and bonding requirements for drilling on public lands.

In the meantime, work continues behind the scenes as Democrats in both chambers race to meet a self-imposed, midmonth deadline. In the House, lawmakers are aiming to complete their work by Sept. 15 under a schedule announced by Pelosi. Once all the markups are completed, the bills will be readied for floor debate by the House Budget Committee.

In addition to Natural Resources, the Oversight and Reform Committee will meet tomorrow morning to mark up its reconciliation package. Under the budget resolution passed last week, Oversight is authorized to draft provisions that will add up to $7.5 billion to the deficit. The virtual markup will cover key priorities that Chair Carolyn Maloney (D-N.Y.) has advocated for since she took over two years ago.

More broadly the committee will explore “accountability provisions,” the website says. That includes more funding for the Government Accountability Office as well as inspectors general offices. Maloney and her Democratic colleagues have repeatedly pushed legislation to insulate IGs from the whims of a president after Trump abruptly fired or transferred several watchdogs. The committee will also debate funding to electrify U.S. Postal Service vehicles — an action the Biden administration has pledged to do.

Also pending over the next two weeks are markups in the Energy and Commerce, Agriculture, Judiciary and Small Business committees. Aides have not confirmed the dates to E&E News.

Schedule: The Natural Resources markup is Thursday, Sept. 2, at 10 a.m. via webcast.

Schedule: The Oversight and Reform markup is Thursday, Sept. 2, 11 a.m. via webcast.