Scientists bet $10K on the climate. Guess who lost 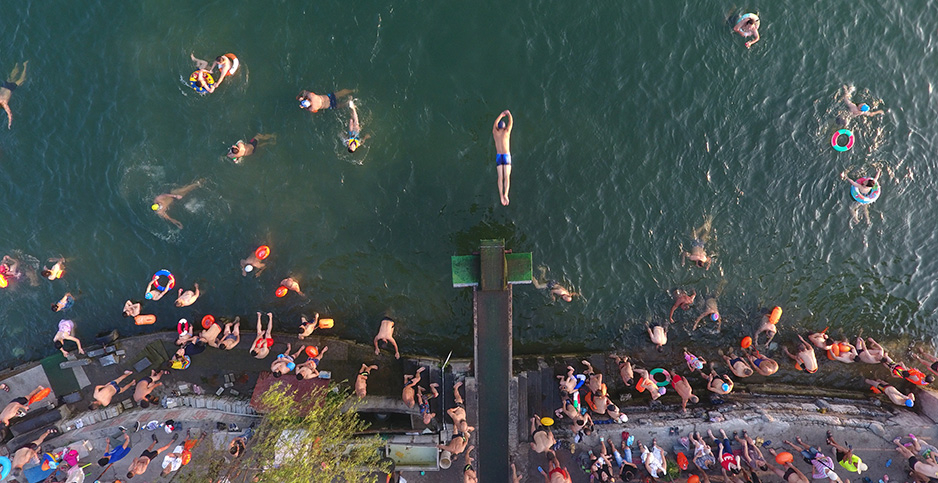 A climate scientist is waiting to be paid $10,000 for a bet he made with skeptics 13 years ago based on temperature increases. Residents of Xiangyang, China, are pictured swimming in a river to escape the heat. Imagine China/Newscom

It was a bet any climate scientist would take.

It was 2005, and James Annan, a climate scientist at the Japan Agency for Marine-Earth Science and Technology, had heard enough. Some researchers and conservative thinkers who reject mainstream climate science were arguing that climate models were wrong or that Earth would enter a cooler period after solar flares faded.

The winner would be decided by comparing global surface temperatures from 1998 to 2003 with those between 2012 to 2017. Annan was confident in the climate models, which showed that it would be warmer. Seven prominent climate contrarians refused to bet. Among them was Richard Lindzen, a physicist associated with the Massachusetts Institute of Technology who has rejected mainstream climate science.

Annan was essentially fighting with one hand behind his back. The comparison started in 1998, an anomalously warm year in the temperature records, partially driven by an El Niño. Still, Annan was confident that his science would outmatch political ideology.

"They didn’t believe what they were saying; this was the whole point to the betting," he said. "It has a serious scientific point to it. … It’s one way of making the point that they’re playing debating games."

Eventually, Galina Mashnich and Vladimir Bashkirtsev, solar physicists at the Institute of Solar-Terrestrial Physics in Russia, agreed to the wager. This week, Annan declared that the contest was over and that Mashnich and Bashkirtsev had lost. It comes as NASA said this week that 2018 could be the fourth-warmest year on record and the fourth year in a row that is 1.8 degrees Fahrenheit above the 19th-century average.

The researchers won’t pay, Annan said. Neither Mashnich nor Bashkirtsev responded to questions from a reporter. Annan said Bashkirtsev wants a new bet. It would raise the stakes to $100,000 and cover another eight-year period.

Annan has declined that offer because he doesn’t think the money will ever arrive. Besides, he said, his point has already been proved.

"It was obvious of course that this settlement risk was the biggest uncertainty right from the start," Annan wrote on his blog, announcing the contest’s end Monday. "I had hoped they would value their professional reputations as worth rather more to themselves than the sums of money involved. On the other hand a certain amount of intellectual dishonesty seems necessary in order to maintain the denialist mindset."

Annan has won money on previous climate bets. In 2016, he and climate economist Chris Hope won a £2,000 wager against members of the Global Warming Policy Foundation, a U.K.-based group that rejects climate science. The winners said 2015 would be warmer than 2008.

He has also lost.

Once, Annan bet that 2010 would break high temperature records. He was off by a year. The five warmest years since records began in the 19th century have all come after 2011, and the 10 warmest years have all come since 1998. Annan said that year, 1998, broke records, and now "we won’t see a year that cold again."

The history of betting on environmental catastrophes stretches back decades. In one famous wager, biologist Paul Ehrlich of Stanford University and economist Julian Simon bet against the price of five metals used in vehicles, electronics and other key elements of the economy. Ehrlich, author of the 1968 book "The Population Bomb," argued that human overpopulation would cause a catastrophe that would threaten humanity’s life support systems.

Simon pushed back, arguing that humans would innovate and find alternatives for anything, such as oil, where supplies were running short. In 1980, they bet on the prices of copper, chromium, nickel, tin and tungsten. By 1990, the prices of the metals had dropped 50 percent. Ehrlich ultimately conceded and sent a check for $576.07 to Simon.

Betting on a warmer future has gotten popular. In 2016, Bill Nye, the science television host, asked Marc Morano, who works for the conservative Committee for a Constructive Tomorrow, to bet that 2016 would be the hottest year on record. Morano declined.

Other bets went unchallenged, too.

Myron Ebell, director of the Competitive Enterprise Institute’s Center for Energy and Environment and the leader of President Trump’s EPA transition team, refused to wager even as he criticized climate models projecting that humans were warming the Earth at an unprecedented pace. Yesterday, Ebell said a columnist for the London Guardian challenged him to a bet that mirrored Annan’s wager.

He turned it down. Ebell continued to attack government temperature records, but without risking the loss of income.

"I didn’t have any money to bet," Ebell said. "I’m not a well-funded climate alarmist."

Annan was inspired to make his bet after hearing Lindzen say that global temperatures would fall over the first two decades of this century. Annan said Lindzen would only agree to the bet if he got 50-to-1 odds. In other words, Lindzen would win $10,000 if temperatures dropped, and Annan would win $200 if they rose.

Lindzen would have lost.

This week, Lindzen criticized a major report from the International Panel on Climate Change and was quoted in a British tabloid saying, "Warming of any significance ceased about 20 years ago." The IPCC report determined that human activity is rapidly creating a warmer future in which sea levels could rise dramatically and millions of people could become climate refugees.

Annan said the bet revealed that Lindzen and others are willing to speak boldly without evidence — as long as it doesn’t cost them any money.

"The world is getting inexorably warmer, and it’s because of us; that’s the simple message," Annan said. "There is nothing new there."