Scientists hit back at gas industry for twisting stove study 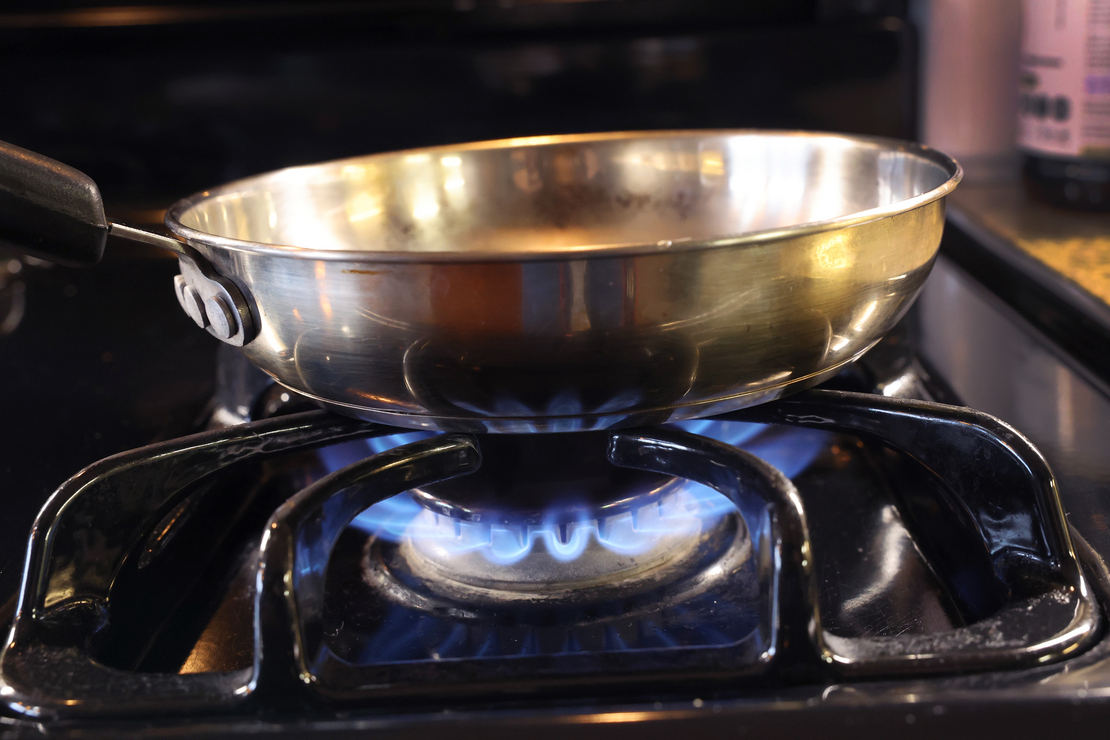 A pan sits on a natural gas stove on Jan. 12 in Chicago. Scott Olson/Getty Images

The furor last week over a potential ban of gas stoves sparked rants of protest and partisan posturing.

But one voice was not heard amid the clamor: the researcher whose study the gas industry seized on to tout the safety of gas stoves.

He says his research is being misused.

Bert Brunekreef, a professor of environmental epidemiology at the Netherlands’ Utrecht University, is the co-author of a 2013 study looking at associations between the use of different cooking fuels and asthma in 47 countries. The research, which was published in The Lancet as part of the International Study of Asthma and Allergies in Childhood, found that open fire cooking did increase the prevalence of asthma in young children, but “detected no evidence of an association between the use of gas as a cooking fuel and either asthma symptoms or asthma diagnosis.”

The finding has been seized on by the American Gas Association and American Public Gas Association in recent weeks as a way to undercut calls for a federal ban on gas stoves, as well as more recent research that has linked gas stove use to asthma in children.

But Brunekreef said, “That’s not a good use of our study.”

AGA has used Brunekreef’s research to combat the findings of another analysis that was heavily cited last week when one member of the U.S. Consumer Product Safety Commission, Richard Trumka Jr., expressed interest in his agency banning gas stoves altogether due to health concerns. The other four members of the CPSC do not support that position and the agency has no plans to regulate gas stoves, but Trumka’s comments set off a frenzy of opposition from Republicans and the natural gas industry (Greenwire, Jan. 10).

The industry groups take particular issue with a peer-reviewed paper, published in the International Journal of Environmental Research and Public Health (IJERPH) last month that found 13 percent of childhood asthma cases in the United States — affecting some 650,000 kids — “is attributable to gas stove use” and could theoretically be prevented by the use of electric appliances in the home.

AGA argues that the study is not trustworthy because some of the study’s authors work for the nonprofit clean energy group RMI, which advocates electrifying buildings. AGA also says that the study “ignored literature” like Brunekreef’s study from a decade earlier that the industry says shows the safety of gas stoves.

“Regulators like the Consumer Products Safety Commission should rely on real data and science, not unsubstantiated claims of advocates,” AGA said in a statement. “Attempts to generate consumer fears with baseless allegations to justify the banning of natural gas is a misguided agenda that will not improve the environment or the health of consumers and would saddle vulnerable populations with significant costs.”

Ironically, that IJERPH study linking asthma and gas stoves is actually based on other research Brunekreef co-authored in 2013.

“It is entirely based on our meta-analysis,” Brunekreef said.

That meta-analysis was a literature review of more than 40 research papers looking at the effects of nitrogen dioxide emissions from gas stoves and asthma. It found, “In children, gas cooking increases the risk of asthma and indoor NO2 increases the risk of current wheeze.” Specifically, it calculated that children who live in homes with gas stoves had a 42 percent increased risk of current asthma and a 24 percent increased asthma risk over their lifetime.

Brunekreef said that although his meta-analysis did not include the results of his other paper cited by AGA, which were finalized too late to be part of the literature review, “it is very unlikely that it would change the bigger picture.”

“You can always find a study that doesn’t find an effect, but you have to look at the combined effect of all of the studies to reach a conclusion,” he said.

That’s what the authors of the IJERPH study did when they wanted to look at how many asthma cases could theoretically be avoided by electrification, co-author Brady Seals said.

Wanting to focus on associations between gas stoves and asthma in the U.S., Seals’ team only looked at the 10 studies in Brunekreef’s meta-analysis that were conducted in North America or Europe “because we wanted to make sure that the housing characteristics and gas characteristics were similar.” Excluding data from other regions actually lowered the percentage of current asthma that could be attributable to gas stove use to 34 percent.

Seals’ team then used that percentage to do a common epidemiological calculation known as the population attributable fraction, which is used to determine what proportion of a disease — in this case asthma — could be avoided if the public were not exposed to a potential risk factor — gas stoves.

“Our study is based on the most straightforward, boring math equation ever, but it is getting so much criticism,” Seals said.

Population attributable fraction calculations are used to measure the strength of a relationship between a risk factor and a disease — but do not prove that one causes the other.

“We were never saying that gas stoves cause asthma, we always say that they are associated with asthma, because that’s what the meta-analysis says, and that’s the data we have,” Seals said.

Asked about Brunekreef’s comments, AGA spokesman Adam Kay said the environmental epidemiologist’s meta-analysis contained other flaws, including that it reviewed “older studies from a period where gas stove design was less advanced and may not be representative of modern gas stoves.”

He also pointed to five additional studies conducted since 2013 that did not associate gas stoves in the home with increased asthma.

‘Data has been building’

Epidemiologists and indoor air experts told E&E News that there is no reason to doubt the results of the IJERPH analysis, in part because it is based on Brunekreef’s other work.

He called the IJERPH study “a pretty robust analysis” because “what they were building on was really the summary of the known literature on the topic.”

When deciding which studies to trust about the health effects of an indoor air pollutant, Levy said, “I tend to look at what the universe of the literature is and what direction it points you in. And it’s actually a consistent story.”

Concerns about the health effects of cooking with gas are not new.

“The data has been building,” said Linda Birnbaum, who formerly led the National Institute of Environmental Health Sciences.

The CPSC first asked for EPA’s help in understanding nitrogen dioxide’s health effects back in 1985. At the time, EPA’s Clean Air Scientific Advisory Committee was deployed to help the consumer watchdog weigh the science, writing in a report that “various studies, including several conducted for the CPSC, have shown that the levels of nitrogen dioxide exposure associated with the use of these appliances significantly exceed the national ambient air quality standard as well as the short-term standard for NO2 recommended by staff of the USEPA.”

The body of evidence has only grown since.

Industry groups this week have argued that studies of gas stoves and asthma cannot be reliable if they don’t include precise measurements of emissions inside a home.

The American Public Gas Association, for example, argues that the IJERPH study “fails to accurately characterize the indoor air quality impact of natural gas cooking” because it “did not test gas appliances in real-life scenarios or compare them to emissions from other cooking sources.”

“Those citing flawed and biased studies as the basis for eliminating consumer choice of appliances are attempting to force mandated electrification on American consumers,” APGA said.

But Birnbaum said those criticisms are merely an effort by the industry to distract from well-established health effects from its products.

“What would you expect?” she said. “Of course the gas industry is saying there is no problem.”

Levy agreed studies that measure the amount of nitrogen dioxide in the home would be “more precise” than studies that merely look at the presence or absence of gas stoves. “But,” he added, “that doesn’t invalidate the use of studies that connect gas stoves to asthma because we know there is a clear and direct pathway from point A to point B.”

That said, he noted that the amount of nitrogen dioxide that kids are exposed to in homes with gas stoves can vary widely, not because of the appliances themselves, but because other factors like construction, ventilation and cooking habits can impact how long emissions linger in the home. Larger homes with better ventilation would disperse pollutants released by gas stoves more easily compared with smaller ones, for example.

That’s one reason why many existing bans on gas hookups for buildings have largely happened in urban centers, like Berkeley, Calif.; New York City; and Washington, D.C., where ventilation may be more of a concern.

“There are some households where it will be a much bigger problem to have a gas stove than others,” Levy said. “Smaller homes that may already have asthmatic children in the home and don’t have good ventilation to the outdoors are households where there is a greater concern, and there will be some socioeconomic disparities in who those folks are, and how much control they have over what is in their homes if they are renters.”

Cooking habits can also change pollution concentrations. Brunekreef remembers a study he conducted in rural areas of the Netherlands in 2006 that found the difference in nitrogen dioxide concentrations wasn’t as large between homes with gas or electric stoves as they had been decades earlier. The reason wasn’t that gas stove technology had drastically changed, but that “people are using their gas stoves less.”

“When we first did studies in the rural areas of the Netherlands 40 years ago, we found people were making meals that were on a low flame for hours to produce very thoroughly cooked meals, and we found enormously high nitrogen dioxide concentrations as a result,” he said. “That doesn’t really happen anymore; people have microwaves and spend less time cooking their own meals.”

Still, the Dutch researcher said he was surprised to read about how the idea of transitioning away from gas stoves has drummed up so much opposition in the United States, including questions about the appliances’ health effects.

Nitrogen dioxide is just one pollutant emitted by gas stoves, which can also release the carcinogen benzene and methane, a potent greenhouse gas, even when off. The totality of those emissions has prompted a campaign by the Dutch government to subsidize costs for homeowners who want to replace their stoves with electric ones.

Even though the Netherlands has a strong natural gas industry of its own, Brunekreef said, “I have not heard anybody arguing about the government trying to take away personal choice of cookers for consumers the way you have it in the U.S.

“Here, everybody recognizes that we need to get rid of fossil fuel combustion sooner than later.”