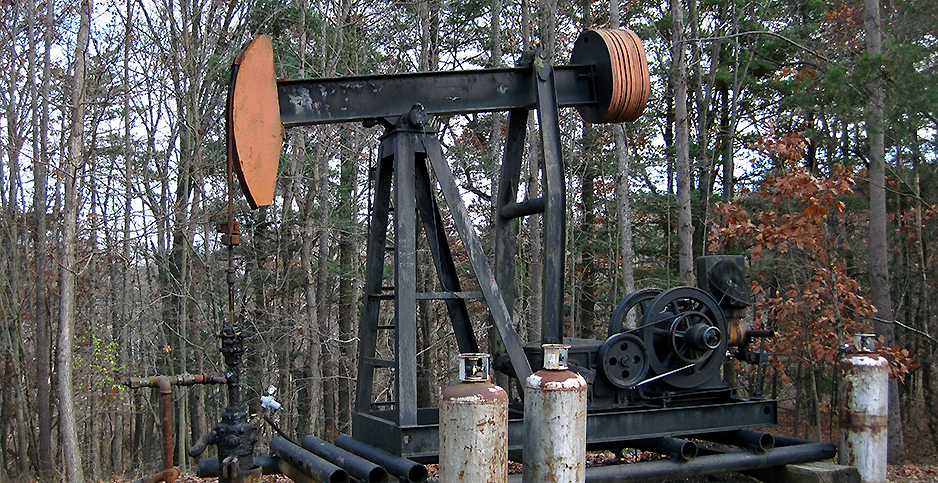 An oil well in Licking County, Ohio, that produced 161 barrels of crude last year, according to state records. Experts have warned that the current oil market downturn could cause many remote, marginally producing wells to shutter — and require cleanup. James St. John/Flickr

The law required the state Department of Natural Resources’ oil and gas division to dedicate 30% of the money collected in statewide severance taxes to fixing so-called orphan wells, which are unplugged wells whose owners cannot be identified.

Despite the cash infusion, the state agency in its first year was able to spend about two-thirds of the money, $18.4 million out of a little more than $26 million. It wasn’t for lack of trying, said Eric Vendel, chief of the oil and gas division. The state simply had a hard time getting the limited number of qualified contractors in Ohio to bid on the jobs.

Ohio’s experience could be a cautionary tale as Congress considers using federal stimulus funds to plug defunct aging oil and gas wells around the country. The idea is being promoted by Democrats and environmental groups as a way to provide jobs for oil field workers during the economic slump and also cut back on the pollution associated with aging wells (E&E Daily, June 2).

"In the face of economic headwinds for the oil industry, the number of orphan wells can only be expected to grow, which will be detrimental to workers, the environment and already budget-constrained states," Sen. Dianne Feinstein (D-Calif.) and Rep. Alan Lowenthal (D-Calif.) wrote in a letter to the Bureau of Land Management last week. That followed a statement from the New Mexico congressional delegation this month urging Congress to provide more funding on the issue.

State oil and gas regulators, who are most closely involved in tracking and fixing orphan wells, are generally receptive to the idea. The Interstate Oil and Gas Compact Commission, which serves as a trade group for state regulators, sent a letter to Congress this month asking lawmakers to consider spending some of any federal stimulus on orphan wells.

A report last year from the IOGCC identified about 57,000 confirmed orphan wells nationally and as many as 750,000 "potential" orphans in the approximately 25 states with oil production. When abandoned and idled wells that have an identifiable owner are included, there are as many as 3 million wells, according to some estimates. The definitions vary from state to state, but most jurisdictions consider a well to be orphaned if its owner can’t be located or can no longer afford to properly plug and abandon it (Energywire, May 20, 2019).

State regulators, environmentalists and some members of Congress say they are worried that the crash in oil prices will create more orphans as companies go bankrupt or walk away from their oil fields.

But as Ohio’s experience shows, orphan wells can be a challenging problem even for well-funded states. Any stimulus funds dedicated to the problem will flow into a patchwork of state agencies with widely varying levels of staffing.

Some states also may be hesitant to accept federal assistance, depending on how the program is structured, Vendel said. The U.S. Coast Guard, for example, has had funds available through its oil pollution prevention program, but Ohio and other states shied away from using the money because the Coast Guard has sometimes required landowners to accept some of the cost.

"The devil’s in the details," he said.

The congressional push comes as new research shows the cost of plugging the most recent wave of oil and gas wells — which are drilled deeper and handle higher pressures than older generations — could be more expensive than some state estimates.

For the last decade, most drilling in the U.S. has happened in shale formations, which are deeper than conventional oil and gas pools. In some formations, companies will drill to a layer of rock 10,000 feet below the surface and extend the well horizontally for 2 miles or more.

The cost to plug those horizontal wells is an order of magnitude greater than plugging a conventional shallow well, because the underground pressure in a well increases exponentially with its depth, according to a report last week from the Carbon Tracker Initiative, a nonprofit group that advocates for climate solutions.

Carbon Tracker’s report analyzed publicly available data for the cost of plugging deep wells in Australia, and also for three Marcellus Shale wells in Pennsylvania. The three Pennsylvania wells were taken out of service in 2008, at a cost of $2.9 million, adjusted for inflation.

If those costs are applicable to the rest of the industry, then the end-of-life expense for the shale boom is higher than both the oil industry and state regulators have estimated, said Rob Schuwerk, one of the report’s authors.

"We think the first thing states have to do is recognize the magnitude of the problem," Schuwerk said in an interview.

The wells have been linked to a variety of problems, including ground and surface water pollution. And they can also leak methane, which is a potent greenhouse gas.

Most states require companies to put up a bond guaranteeing that they’ll cover the cost of plugging wells at the end of their productive life. But some Eastern states like Pennsylvania and Ohio were home to decades of production before the bonding rules went into place.

Even now, many states’ bond amounts are inadequate anyway. Ohio allows companies to post a $15,000 bond to guarantee an unlimited number of wells. The state’s average plugging cost last year was in excess of $100,000 per well.

That makes the idea of plugging wells with federal funds attractive, said Adam Peltz, a senior attorney with the Environmental Defense Fund. Federal money not only would supplement the states’ limited resources, it would help reduce pollution and provide blue-collar jobs in largely rural areas.

"It checks a lot of boxes right now," Peltz said.

Plugging wells, though, is a complicated process requiring specialized equipment and skilled workers.

Ohio’s oil and gas division found there were only 29 qualified contractors when the state first tried to expand its plugging program. After some work, the state now has a list of 52 contractors, Vendel said.

In Wyoming, state Oil and Gas Supervisor Mark Watson also raised the issue of contracting capacity when a legislative committee suggested expanding the state’s plugging program. Wyoming only has one cement supplier, he said, and the state has a limited number of staff to handle the title searches, bond revocation hearings and other administrative work required to shut down an orphan well.

If Congress opts to provide more funding for states, Wyoming could hire an engineering firm to handle the paperwork, Watson said in an interview.

Other states may not have the same capacity. Kentucky, which abuts Ohio, has identified 13,000 orphan wells and spends about $235,000 a year on plugging, according to John Mura, a spokesman for the Kentucky Energy and Environment Cabinet.

In North Dakota, the state Industrial Commission voted Friday to spend $33 million in funding from the federal Coronavirus Aid, Relief and Economic Security Act on plugging wells. The commission, led by Gov. Doug Burgum (R), approved the idea in part to keep oil workers from leaving the state.

Kate Kelly, with the Center for American Priorities, said she was optimistic that plugging wells could help other states preserve or create jobs in the oil field. The Washington-based think tank has pushed for well-plugging funds as part of a broader program to help oil-producing states transition away from their dependence on fossil fuels.

"A big plug of cash is good incentive," Kelly said.