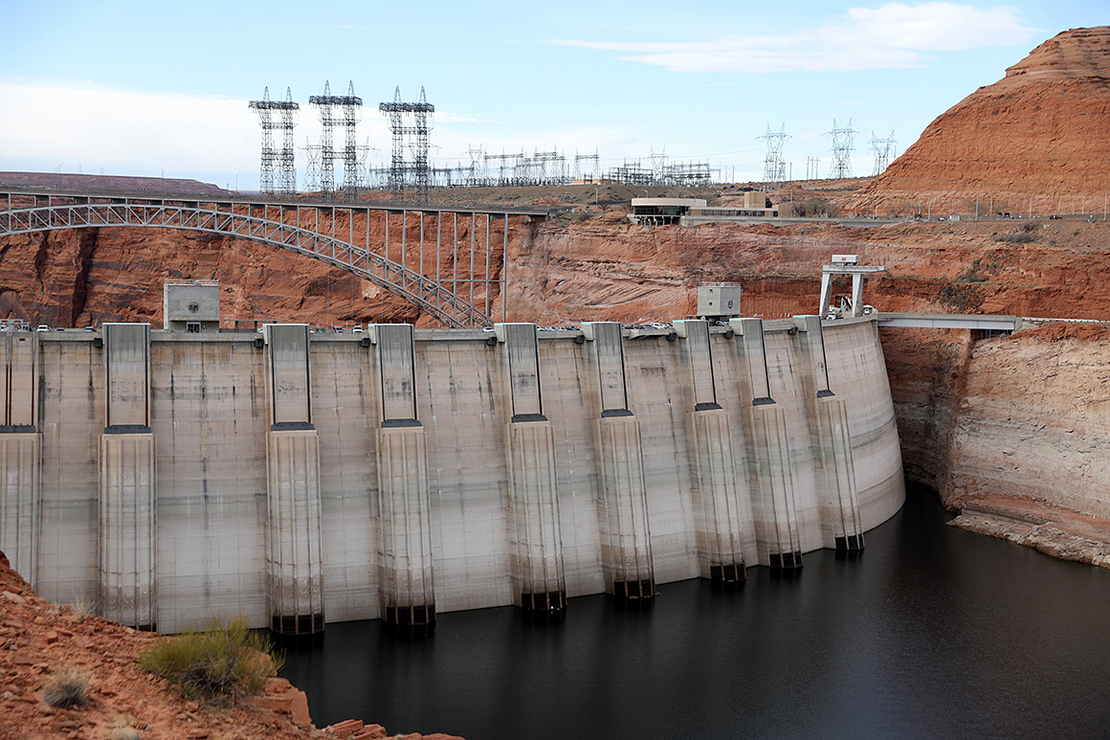 As the megadrought gripping the Southwest stretches into its third decade, energy providers are preparing for a future where hydropower is no longer a reliable renewable resource.

This month brought a raft of warning signs. The Colorado Basin River Forecast Center reported below-normal snowmelt across the Southwest, several large Western reservoirs are at perilously low levels, and the Interior Department is holding back the release of 480,000 acre-feet of water from Arizona’s Glen Canyon Dam to prevent a hydropower shutdown (Greenwire, May 3).

Utilities and grid operators say they have this summer’s energy needs covered, despite the low snowpack. But the drought has forced them to reconsider hydropower’s long-term role as a steady backstop resource, as well as grapple with a lack of water for coal and nuclear plants, and the heat impact on the grid.

“The premise behind hydropower being a reliable resource is that there’s water behind the dam,” said Nick Schlag, a partner with the consulting group Energy and Environmental Economics Inc. (E3). “When water levels are so low that you can’t actually run water through the turbines, the reliability value has been jeopardized.”

Climatologists have called the Southwest’s record-breaking drought the region’s driest period in at least 1,200 years. The drought has also coincided with a regionwide generation transformation as utilities bring on more renewables and retire coal plants, creating a grid that is more efficient but comes with reliability questions.

The North American Electric Reliability Corp. (NERC) recently warned that the drought could threaten electricity supplies in the Western Interconnection, especially during a heat wave. The combination of high demand with low reservoir levels in the late summer can force electricity providers to lean on heavy-emitting fossil fuel plants or risk power outages (Climatewire, May 20).

In a report this month, the U.S. Energy Information Administration predicted that a drought could halve the contribution of hydroelectricity to California’s summer generation mix. That, in turn, would force the state to purchase more from nearby markets and rely on natural gas generation, increasing wholesale electricity prices and overall carbon dioxide emissions.

For now, hydropower isn’t so imperiled that the lights will go out across the West. In a separate May report, EIA found that regionwide hydropower generation would actually be “slightly higher” this year than in 2021, representing about 6 percent of the generation mix.

In a statement to E&E News, the California Energy Commission said that while hydroelectricity makes up an average of about 10 percent of the state’s electricity generation, there is no expectation of outages this summer “directly attributed to the drought.” The Western Area Power Authority (WAPA), the Department of Energy’s power marketing administration that distributes power from the Colorado River to 15 states, said that the federal government’s efforts to protect water levels at Glen Canyon Dam would also avoid serious problems.

“Although little can be done to influence the weather, WAPA anticipates having sufficient reserves this summer for our three balancing authorities and one sub-balancing authority in the West,” WAPA spokesperson Lisa Meiman said.

Western states that have long dealt with drought conditions are used to the short-term impacts of water scarcity, said Jordan Kern, a North Carolina State University College of Natural Resources professor who studies hydroelectricity. Providers can turn to coal plants to ensure reliability in the hot months or can import electricity from the Northwest, where snowpack levels are significantly higher and hydroelectricity is more available.

The bigger issue, he said, is the long-term impacts of a sustained drought, especially as fossil fuel plants retire.

“From a grid perspective, if you’ve historically relied on having a certain amount of hydropower in the summer, that amount has allowed you to build less of other resources,” Kern said. “If moving forward, you’ll have less hydropower during the hottest part of the year, you’ll be looking to either build more or retire less.”

The California Energy Commission said the state has developed contingency resources like demand reduction incentives and backup generation, as well as increasing output beyond normal limits from existing sources “that can be drawn on in the event of conditions such as extreme west-wide heat events.” Gov. Gavin Newsom (D) has also proposed a “strategic electricity reliability reserve” that would enable the state to have 5,000 megawatts available in the event of an emergency like a drought.

WAPA has already had to purchase additional power to meet its obligations to customers in six states. It has sought a rate increase for wholesale electricity customers in the Colorado River Storage Project, which could cause ripple effects across the region as utilities try to keep costs low.

“We are actively exploring potential alternatives to marketing hydropower, managing electricity rates and maintaining the infrastructure in worst-case conditions,” said WAPA’s Meiman. “We are also working closely with our generating partners to identify efficiencies and manage costs.”

In a report for several power providers in the Southwest, E3 warned of a “significant and urgent need” for new resources across the region, in part because of lost hydroelectricity potential from the drought. The region faces a gap of almost 4,000 MW of effective capacity by 2025, as populations grow, hydroelectricity declines and existing fossil fuel plants retire, the report found. That gap could rise to 13,000 MW by 2033 with no action.

“The utilities that rely on hydropower typically have their planning approaches factor in a range of risks to different conditions, and I think they are doing a pretty good job of planning for and anticipating new capacity,” E3’s Schlag said. “But given the magnitude and scale of the challenge ahead of us, there’s a lot of steel that needs to be put in the ground over the next five to 10 years. Any delays and supply chain issues makes the concern acute on how they will execute those plans.”

Rippling effects across the power system

Although hydropower is the most obvious victim of the drought, the NERC report also warned that dry conditions can ripple across the power system. A drought accompanied by a heat wave can spike demand, while dry conditions also raise the risk of wildfires that could threaten transmission lines and solar farms.

The NERC report also notes that drought conditions on the Missouri River Basin has lowered water levels, which can affect thermal power generators that rely on the river for cooling.

That echoes a warning from a report released last year by analysts in the Energy Department’s National Renewable Energy Laboratory, which warned that water supplies to coal and nuclear plants could dwindle. The report included a scenario where an extreme drought drew down water levels across 30 reservoirs in Texas, affecting operations at one-fifth of the state’s power plants and leading to “significant capacity disruptions” (Energywire, June 28, 2021).

In Utah, coal produces more than 50 percent of the state’s energy, necessitating large amounts of water for cooling. Edwin Stafford, a marketing professor at Utah State University working on renewable energy, estimated in a report last year that the state’s energy sector used at least 16.6 billion gallons of water in 2020, in large part to cool coal plants. Rocky Mountain Power, the largest energy provider in Utah, uses an estimated 9.4 billion gallons of water a year at its fossil fuel plants, according to an integrated resource plan from the utility’s parent company PacifiCorp.

“If the state wants to keep its coal and gas plants going, not only will they continue to guzzle water, they will continue to do it in an environment where the need for water is more intense,” Stafford said. “We’ve got to drastically cut the water use in our energy sector if we’re going to accommodate any population growth.”

In March, Utah lawmakers passed a bill that will require the state to study how much water is consumed by power production, including planned hydrogen energy deployment.

In a plan released in May, the Utah state government said it was committed to “supporting a clean energy future” as well as an “any of the above” energy routine, although it did not commit to any greenhouse gas reduction or coal retirement goals. The plan, however, did note that Utah’s 29 utility-scale hydroelectric plants — which accounted for 19 percent of renewable generation in 2020 — are at risk from the “recent and ongoing drought.”

Rocky Mountain Power is “doing all we can at our own hydro facilities to manage during this drought,” said spokesperson David Eskelsen, adding that there are “contingency plans to ensure continued reliable service to customers” at the utility’s coal and natural gas plants.

Kern, the North Carolina State University professor, said that with states and utilities operating in known drought conditions, reliability should be sufficient this year. But as the drought stretches on, things could get worse, he said.

“What happens if next year everyone, including the Northwest, is under stress? Then it becomes a much more difficult situation,” Kern said.