This is how an oil giant uses internal carbon pricing 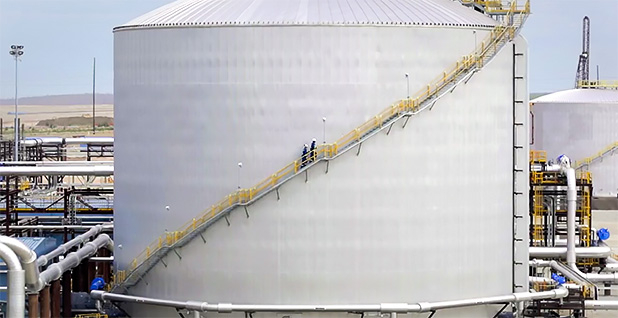 Exxon Mobil Corp. proprietary records laying out a highly technical and advanced view of the company’s climate strategy have surfaced, and the company is upset they’ve been made public.

The files provide an unusually detailed window into how Exxon thinks about climate change behind closed doors, and they shed light on how the oil giant simulates the costs of climate regulation, including with so-called "proxy costs of carbon."

New York Attorney General Eric Schneiderman (D) published the files two weeks ago. The documents, undated and brief, are part of the latest set of court records the attorney general has released in connection with his investigation of Exxon, an inquiry the company is fighting fiercely.

Since 2007, Exxon has mimicked the economic effects of climate regulation — through carbon taxes and cap-and-trade markets — on its business.

Company analysts consider proxy costs of carbon in their global economic models and when thinking about the finances of specific projects. Policies to combat climate change are essentially tallied along with other expenses, such as labor, steel and raw material prices.

But in public settings, Exxon is elusive about its proxy cost methods and discusses its techniques in broad terms. So while the records in Schneiderman’s possession answer some questions, they spark many others.

Here are five thoughts about the files:

What do they show?

Exxon includes proxy costs to test how climate regulations might shift the global oil and natural gas markets, and the company deploys a separate series of costs to analyze its individual projects.

Joe Kruger, a visiting fellow at the nonpartisan Resources for the Future, said using proxy costs is often smart business.

"It’s kind of viewed as due diligence," Kruger said of proxy costs generally. "The last thing I think you’d want if you’re an energy company, or that you should want, is to build a project that has large additional costs that you didn’t count on at the planning stage."

In court filings, the company said Friday it forecasts carbon prices that will reach $60 per ton of emissions by 2030 for wealthy countries and, in some nations, $80 per ton by 2040.

"Aside from these broad ranges, ExxonMobil has not released a detailed set of the figures it uses to assess global energy demand or in project planning," Exxon’s attorneys said.

But the files — which include detailed charts, timelines and dates — provide far more information.

While the files are not dated, they appear to have been written in 2014, possibly early in the year, since they include charts using figures and data from that year.

Do these pretend carbon prices affect Exxon’s decisions about drilling?

Taken alone, the files suggest the company has followed through privately on public statements that it thoughtfully studies the financial risks of climate change and government efforts to address it. They also reinforce a belief among critics that Exxon holds granular, technical information back from investors and the public, putting out sanded-down statements instead.

"You always get the sense that there’s a lot more behind the scenes that they could tell you that would makes things clear," said Andrew Logan, director of Ceres’ oil and gas industry program.

Logan reviewed the files. It’s striking that Exxon is nuanced in its internal analysis but doesn’t share that work broadly, he said.

"This is a good example of that gap between the private thinking and the public disclosure that has really created a big problem for the company," he said.

Logan added, "Can you square these charts and these numbers with the investments the company’s already making?"

That question can’t be answered based on the information in the documents.

After reading the internal draft, you come away with the sense that Exxon follows politics, current affairs and world events with a sharp eye.

The draft mentions the climate summits in Durban, South Africa, in 2011 and in Paris in 2015. It also discusses carbon markets in Australia, Canada and California, as well as emissions trading markets in the European Union and New Zealand.

The files show that the company plans for climate policies on a nation-by-nation basis and based on wealth. Exxon builds into its costs actual carbon prices for a given country — if those prices are currently active — and estimates carbon prices where it feels appropriate otherwise.

Are the company’s estimates aggressive?

Based on the records disclosed by Schneiderman, the estimated carbon prices would rise sharply in Organisation for Economic Co-operation and Development nations between now and 2020.

The forecast came before events that will slow efforts to slash emissions — President Trump’s election and his decision to withdraw the United States from the Paris Agreement, most notably. But reaching a global deal at the Paris conference was still a dream for climate advocates when the document was written.

"This document seems to me either on the curve or ahead of the curve, rather than behind the curve, in actual world carbon pricing," Charles Komanoff, director of the Carbon Tax Center, said in an interview. "This four-page document doesn’t seem to me to be a smoking gun saying that they weren’t looking soberly and seriously at current and near-future carbon pricing."

"Are we meant to infer or surmise that Exxon’s global projections of world oil demand reflected these assumptions?" he said. "It seems like yes."

Analysts who study proxy costs say companies implement them differently. It’s often unclear how the costs they use filter into their operations. Firms are cagey about where the cost goes. Does the proxy price apply to the emissions of a lone rig or to all knock-on emissions released because of that rig?

"What they want to do is think about the likely price," Williams said.

Exxon thinks about its business in wealthy countries differently than in the rest of the world.

According to the files, Exxon separates countries that belong to the OECD from those that don’t.

The company seems to use higher proxy rates in OECD nations than elsewhere.

"For non-OECD we are not including GHG cost of credits in base economics," reads a sentence in the draft memo.