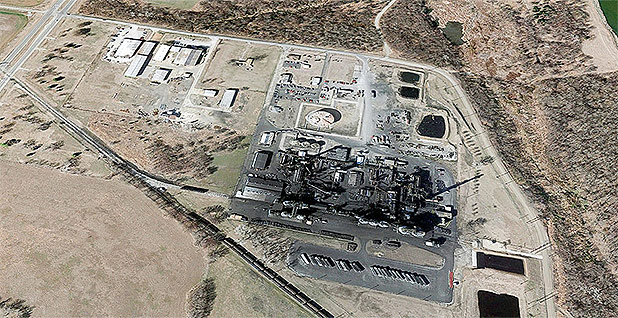 In 2009, Continental Carbon Co. agreed to pay $10.5 million to settle a class-action lawsuit over pollution from its Ponca City, Okla., plant, shown here in a satellite image. A federal judge has now approved changes to a 2015 settlement that will give the company up to 2 ½ more years to install new soot controls. Imagery ©2018 Google. Map data ©2018 Google

EPA and the Justice Department have won court approval for changes to a 2015 consent decree that will give a manufacturer of a key tire product years longer to install pollution controls, brushing aside objections raised by members of an Oklahoma Indian tribe living near one of the company’s plants.

U.S. District Court Judge Stephen Friot of the Western District of Oklahoma signed off Friday on the amendment to the settlement with Continental Carbon Co.

"I’m dumbfounded," Casey Camp-Horinek, a council member of the Ponca Tribe of Indians in north-central Oklahoma, said in a phone interview this morning. "This is just another defilement beyond my comprehension."

Continental Carbon, based in Houston, makes carbon black, a powdery substance used to reinforce tire strength. Almost a decade ago, the company had paid $10.5 million to settle a class-action lawsuit brought by the tribe and nearby landowners over what court filings described as "black dust" stemming from its Ponca City, Okla., plant.

The 2015 consent decree required Continental Carbon to install controls to reduce soot-forming emissions on a fixed timetable; under the amendment, the firm will get up to 2 ½ more years to meet those terms.

The Trump administration proposed the amendment last year as part of what was essentially an industrywide package deal with Continental Carbon and four other makers of carbon black.

Under the deal, three of those companies agreed to take first-ever steps to control emissions of sulfur dioxide (SO2), nitrogen oxides (NOx) and particulate matter (PM).

The fourth, Boston-based Cabot Corp., would also be granted more time to meet the terms of the settlement it reached with EPA in 2013 (Greenwire, March 26).

DOJ lawyers lodged the elements of the deal with various federal courts in late December; the department has moved in recent days to make all of them final, court filings indicate.

‘Train had already left the station’

In the case of the amendment to the Continental Carbon consent decree, however, neither EPA nor DOJ had notified the Ponca Tribe, which learned of it from a reporter only in March, well after the standard 30-day public comment period had expired.

The tribe immediately sought formal consultations on a "government-to-government basis," saying in a March letter to EPA Administrator Scott Pruitt that the matter was of the "utmost importance."

In follow-up comments submitted earlier this month, the tribe wrote that the proposed amendment "marks a woeful shortcoming in the agencies’ responsibilities to the public."

"The Poncas never consented to living at the wrong end of a tail pipe," the tribe said in the comments. "Notably absent in the proposed amendment is any mention of local impacts of the requested postponement — including a complete dearth of information relating [to] the anticipated health impacts," it added.

The tribe asked the government to undertake an analysis of the anticipated effects and then reopen the matter to public input.

But while officials with DOJ and EPA did meet with tribal representatives last month, "effectively, the train had already left the station," Jason Aamodt, the tribe’s general counsel, said in a separate interview today.

In their Friday motion seeking Friot’s approval of the amendment, DOJ attorneys disagreed that the federal government was under any obligation to formally consult with the Ponca Tribe, adding that the tribe’s comments "do not provide a basis" for rejecting the amendment to the 2015 consent decree.

While Continental Carbon gets more time to comply, "the ultimate requirements to install and operate pollution controls, and to meet stringent SO2, NOx, and PM emission [limits] remained unchanged," the DOJ attorneys wrote.

Besides still ensuring reductions in plant emissions, the amendment also helps provide "a level playing field compared to settlements in similar enforcement actions in the rest of the carbon black industry," their filing says.

Both Continental Carbon and Cabot, citing financial hardship from having to meet the terms of their original consent decrees, had hired lobbyists to press their respective cases.

But former EPA enforcement officials called it unusual, if not unprecedented, for regulators to allow firms more time to install required pollution controls to put them on par with rivals who settled later.

Dennis Hetu, president of Continental Carbon, did not immediately respond to an emailed request for comment this morning.