Breyer and the environment: ‘He wasn’t a liberal. He was a moderate’ 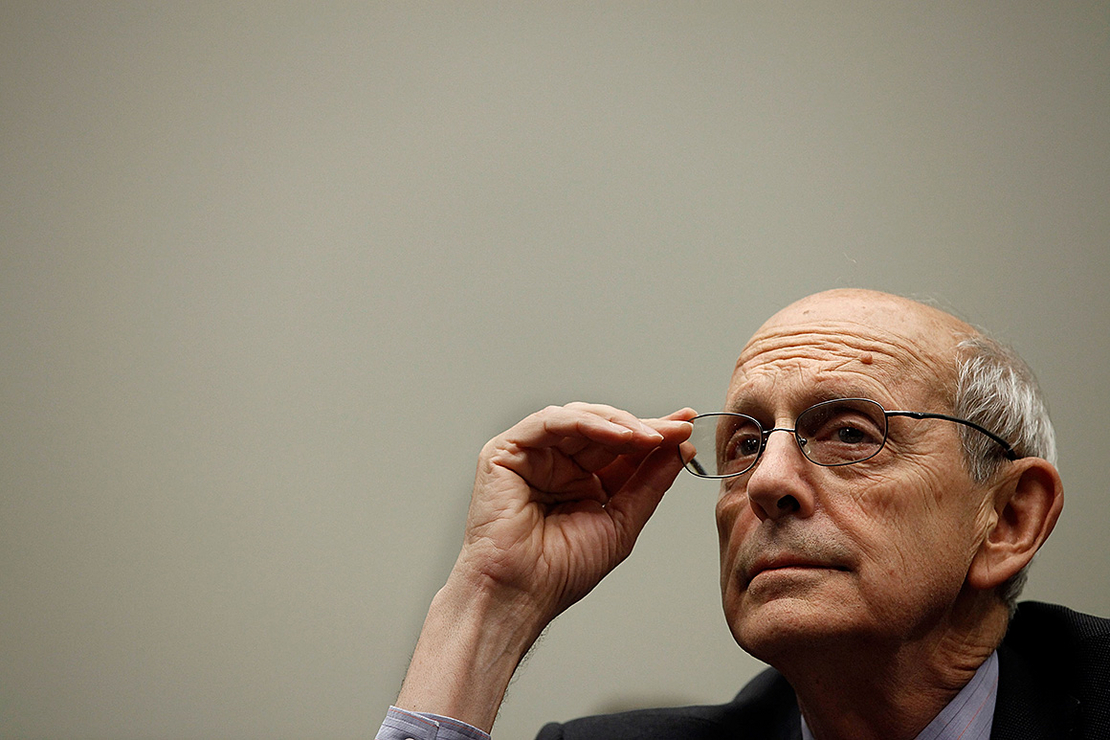 When Justice Stephen Breyer leaves the nation’s highest bench this year, he will be remembered for his practical approach that often led him to side with environmentalists in court.

But observers note that during his nearly 28 years on the Supreme Court, Breyer has also handed down some rulings that have handcuffed green groups in legal challenges.

“He wasn’t a liberal. He was a moderate,” said Vermont Law School professor Pat Parenteau. “And his environmental record is generally good, but not as strong as [former Supreme Court Justice John Paul] Stevens, for example. He was an administrative law professor, and it showed. He was very much focused on the record.”

Breyer has indicated that he will retire from the court by July (Greenwire, Jan. 26).

Breyer, who at 83 is the court’s eldest member, has a reputation for launching thought-provoking hypotheticals during oral arguments and building bipartisan consensus when it comes time to write opinions.

Those skills were on display in the 2020 Clean Water Act case Maui County v. Hawaii Wildlife Fund, in which Breyer brought two of his conservative colleagues on board in his majority opinion that said federal permits can sometimes be required for pollution that moves through groundwater (Greenwire, April 23, 2020).

“That plugged a huge, gaping loophole in the Clean Water Act,” said Parenteau.

At the heart of Breyer’s decision was a new “functional equivalent” standard for determining when federal permits were required — a test he had appeared to invent on the spot during oral arguments months earlier.

“That was classic Breyer,” said Robert Percival, director of the Environmental Law Program at the University of Maryland. “Some people describe him as a problem solver. At arguments, he was the quintessential law professor trying out hypotheticals on his law students, except in this case, he was trying them out on Supreme Court advocates.”

While the Maui ruling avoided a major loss for greens, Breyer wasn’t an “automatic vote for environmentalists,” Percival said.

In the 1998 case Ohio Forestry Association Inc. v. Sierra Club, for example, Breyer penned the unanimous opinion finding that a Forest Service resource management plan was not ripe for judicial review — a substantial blow for the environmental challengers in the case.

“That has bedeviled environmental litigants ever since,” said Parenteau of Vermont Law School.

Breyer favored boosting environmentalists’ standing in other cases, such as in his 2009 dissent in the 5-4 case Summers v. Earth Island Institute, which dealt with a challenge by green groups to Forest Service regulations.

“The regulations under challenge here neither require nor forbid any action on the part of respondents,” wrote Scalia, who was a member of the court’s conservative wing.

In his dissent, Breyer pushed back on the majority’s view that a challenger must face a “realistic” threat.

“To know, virtually for certain, that snow will fall in New England this winter is not to know the name of each particular town where it is bound to arrive,” he wrote.

“The law of standing does not require the latter kind of specificity,” he continued. “How could it?”

‘Hazardous to our health?’

When former President Clinton chose to promote Breyer from the 1st U.S. Circuit Court of Appeals to the Supreme Court, legal observers questioned whether he would be sympathetic to environmentalists’ claims, especially in challenges involving federal regulations.

During the confirmation proceedings, University of Texas law professor Thomas McGarity penned an article titled “Could Justice Breyer be hazardous to our health?” — a piece that raised concerns about Breyer’s writings minimizing the risks of environmental contamination and favoring gas industry deregulation in the 1970s amid the energy crisis.

“The critical question, on which Judge Breyer’s existing judicial opinions shed very little light, is whether Justice Breyer will retain this sympathetic posture when the agency action runs counter to his strongly held preference for free markets,” McGarity wrote at the time.

As a Supreme Court justice, however, Breyer largely favored federal regulation on issues like climate change.

“Justice Breyer was a consistent vote to uphold EPA and other federal action to protect the environment as reasonable policy choices fairly committed to agency discretion,” said Peter Hsiao, a partner at the law firm King & Spalding.

Breyer is the last remaining member of the five-justice majority in 2007 in the seminal climate case Massachusetts v. EPA, which said the federal government had the authority to regulate greenhouse gas emissions as “air pollutants” under the Clean Air Act.

He has also advocated for the need for judges to incorporate science into their decisionmaking (Climatewire, Jan. 26).

Breyer’s departure also follows calls by progressive groups for the justice to step down from the court while a Democrat is in the White House.

Justice Ruth Bader Ginsburg had faced similar calls during the Obama administration, but she stayed on the court. She died during the last months of the Trump administration, which allowed the former president to choose Amy Coney Barrett as her replacement, solidifying a 6-3 conservative majority on the court, likely for decades to come.

Breyer will be remembered well for the timing of his retirement, said Karen Sokol, a law professor at Loyola University.

“This helps just solidify his legacy and his reputation over time,” she said. “It could have gone badly if he held on until he had to leave.”

While Breyer’s exit won’t give President Biden a chance to chip away at the court’s conservative majority, it does give the president an opportunity to reinforce its liberal minority.

Biden has pledged to nominate a Black woman if he has the chance to choose a Supreme Court justice (see related story).

“The Biden administration can be expected to nominate a candidate with similar or perhaps even more expressed views on environmental safeguards,” said Hsiao of King & Spalding.

Green groups yesterday said it is crucial for Biden to tap a justice with a strong environmental record as the Supreme Court gets ready to tackle high-stakes climate and water cases.

The climate case, West Virginia v. EPA, will be among the last cases Breyer decides before he retires this summer. The dispute, which is scheduled for argument Feb. 28, deals with EPA’s Clean Air Act authority to regulate power plant emissions (E&E News PM, Oct. 29, 2021).

The justices agreed this week to take up another major environmental case, Sackett v. EPA, which could lead the court to overturn long-standing Clean Water Act precedent.

Sackett is expected to be argued and decided next term — after Breyer has departed the court (Greenwire, Jan. 24).

“Two cases now before the Court aim to weaken decades of clean air and water quality protections and to limit the tools we need to confront the climate crisis,” said Mitch Bernard, chief counsel of the Natural Resources Defense Council, in a statement.

He continued: “These cases underscore the stakes in making sure his successor will interpret our laws consistent with Congress’s purpose in enacting them, understands the importance of access to the courts, and recognizes the government’s responsibility to protect public health and the environment.”